Despite being the oldest wine growing region in South Africa, the Constantia Wine Route has, in recent years, really flourished into a wine route that offers a beautiful modern wine experience and I couldn’t be happier to have a plethora of incredible wine farms on my doorstep!

In 2019 Constantia celebrates 334 years of wine-making in the Constantia valley and this is also the first year that there are now women at the helm of not just 1 but 3 of the wineries on the route… An exciting full circle moment for Constantia when you consider that history dictates one Catharina Ras was the first woman to own land in the Cape back in 1682 – the very first agricultural farm “Swaaneweide”, now known as Steenberg.

All three of the women winemakers who have stepped up to the helm of various Constantia wine farms have only been in their current positions for a year or less. I felt it would be really interesting to find out a bit more about their wine journey so I asked them each to answer a few questions…

1. Tell us a little about your journey as a winemaker. What first pushed/pulled you in to the industry, and what lead you to the Constantia Wine Route?

EB: My journey in wine started as a love for nature and the great outdoors. I always knew I preferred working with plants and animals and eventually decided I wanted to be involved in agriculture but staying in the Western Cape. Wine was the obvious sector to go into. This was 27 years ago and here I am, still in love with wine. My history with the Constantia Wine Route is brand new, but an exciting twist in my life journey and one I’m looking forward to making a success of. 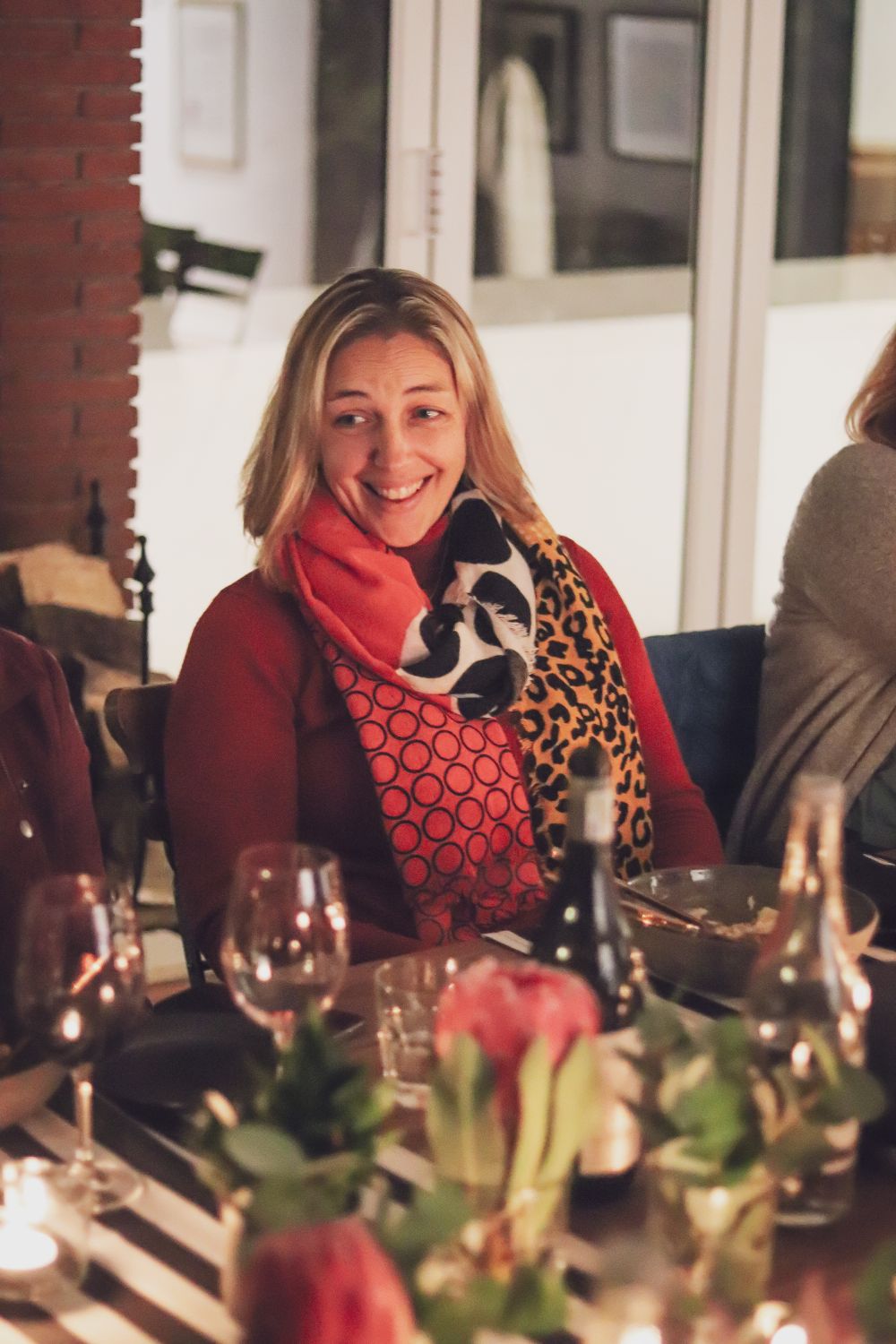 MVDM: At the ripe age of 18 I was given the impossible task of deciding the fate of my future. I was of opinion that the school of life would teach me a great deal during a gap year abroad, but my parents disagreed, and I so ended up dragging my feet into a general Bachelor of Science degree. I soon learnt that I could switch to a Major that would mean tasting wine during class time. You know, every student’s dream. But what started as a clever diversion of responsibility, a credit bearing social activity, evolved into a way of life that has consumed me. I had by some benevolent force fallen completely and utterly, fatally in love with wine, and I have been devoted to the glorious liquid since.

As for Constantia, I was just about scraping the surface of a Postgraduate diploma in Marketing at UCT in 2015 when my feet became itchy. I missed wine. Yes, the business world was incredibly interesting (and I have returned to it recently), but I had become nostalgic about my days under Mother Nature’s whip. I contacted Beau Constantia to offer some free labour whilst completing my studies around the bend and their winemaker, Justin, invited me to come and work a harvest at Constantia Glen, where he was making their wines. I soon became their Assistant Winemaker, where I worked closely with the Beau Constantia wines and their incredible little pocket of terroir at the upper reaches of the Constantiaberg. In the blink of an eye (that’s 4 vintages) later, I started as Winemaker and Viticulturist at Beau Constantia with the 2019 vintage. DDJ: I’ve had a bumpy road so far ever since taking over from the previous winemaker – ups and downs but overall it has been very exciting to be able to represent Constantia Uitsig as their winemaker & viticulturist. I grew up on a farm in Namibia which is most likely why I love working in the vineyards and why I’m drawn to a more practical and outdoors kind of job. My time in Germany also drew me into winemaking. Never thought I would end up in Constantia – I suppose I got lucky.

2. What do you love in particular about winemaking in the Constantia Wine Route?

EB: I love that it’s so rich in history and proud in heritage. This valley represents cool climate wines at its core and terroir expression is what we do best.

MVDM: We’re a tight-knit community of winemakers that work together in sharing philosophies, learnings and of course, great wines.

DDJ: My winery is rather impressive so I’m very blessed. To work in that environment. But it’s not the winemaking that I love about Constantia the most – it is the good relationships I have with all my neighbors – being able to pop over to Buitenverwachting, the neighboring farm, to have a coffee with their winemaker Brad.

3. We’re seeing more women winemakers entering the industry – what are your reflections on this change and the challenges that have led to it?

EB: Female winemakers have a different touch and approach to winemaking. It’s not right or wrong, it’s just different and that’s what makes wine interesting and alive! I believe that as long as you have strong values and respect for others, people will treat you with respect and value your opinion. If that’s the case gender doesn’t have to play any role in your career as winemaker. You have to have sound winemaking principles and practices, and a good palate. Work hard and prove yourself and then have the self-belief to stand on your opinion.

MVDM: Female winemakers are nearly as rare as the term “male winemaker.” The aforementioned scarcity due to a traditionally patriarchal wine industry, and the latter due to the fact that an individual is likely to be assumed male when simply using the term “winemaker”. Yet, some of these lesser spotted “female” winemakers are killing it out there today! My ultimate goal as a winemaker is to connect the human soul to the soul of a place by presenting Mother Nature to mankind in a consumable way. For that reason, I believe in interfering as little as possible in the process taking place from vine to wine, making me, and the effect of my sex, pretty futile when compared to the greater factors such as climate, topography, geology and soil. 4. Can you share with us a story or two from your career as a winemaker that have been defining or memorable moments?

EB: I have had many. From the first time I got a written warning for over adjusting a wine’s Sulphur levels, to the fantastic Italian blend we ended up making because of an incorrect over adjustment of acidity on Nebbiolo. I have met so many inspirational people and tasted great wines. Winemaking is such a passionate labour of love. You give of yourself when you make a truly beautiful wine. And the most rewarding moment is still the one where the consumer enjoys the wine you made, and you know that in some small way it has touched their lives and hopefully made an experience more memorable.

MVDM: Not so much defining but definitely memorable, even though it wasn’t that funny at the time, but falling into a tank of freshly pressed Grenache in Châteauneuf-du-Pape, and having to manoeuvre my wine-soaked self out of the slippery situation – in front of a large audience of importers. 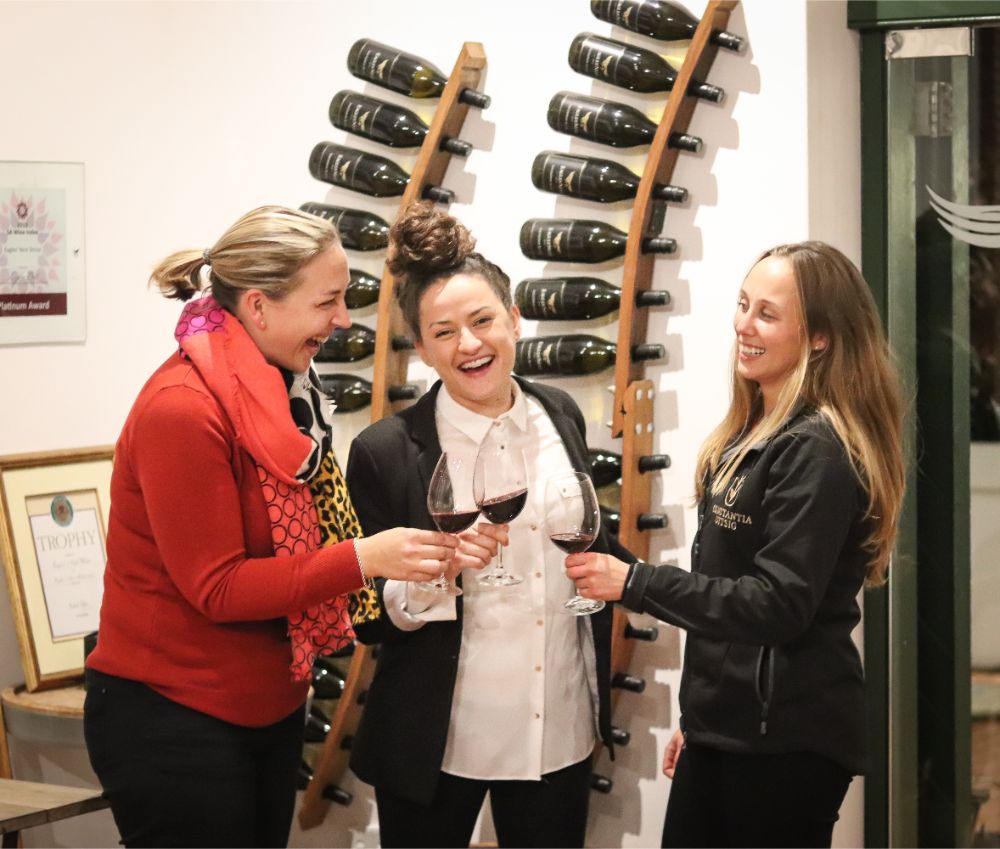 As part of the celebration to mark this new wave of women sweeping in to the valley, I joined a group of intrepid women in wine media for an amazing experience at Eagles Nest Winery recently for a fresh reminder about just how beautiful this part of my valley is when you take it in from a new perspective… Constantia Valley and all the wine estates are incredibly scenic.

Visitors to the Constantia Wine Route website can explore each of the valley’s estates and discover the rich history and the legacy of this world class wine producing region in order to plan their visit to the valley to suit their interests.

From vineyard to cellar to tasting & dining experiences there is so much on to experience in the Constantia Wine Route.