Thanks to a combination of late nights and forward planning I’ve very fortunately managed to put to bed most of my work and Christmas shopping already, for which I am very grateful as this means there is a bit more time for fun… and that’s what school holidays should be about right?

On Saturday morning we bypassed all the manic shoppers at the mall and headed straight for the quiet sanctuary of the cinema to watch the latest Disney animation, Moana. 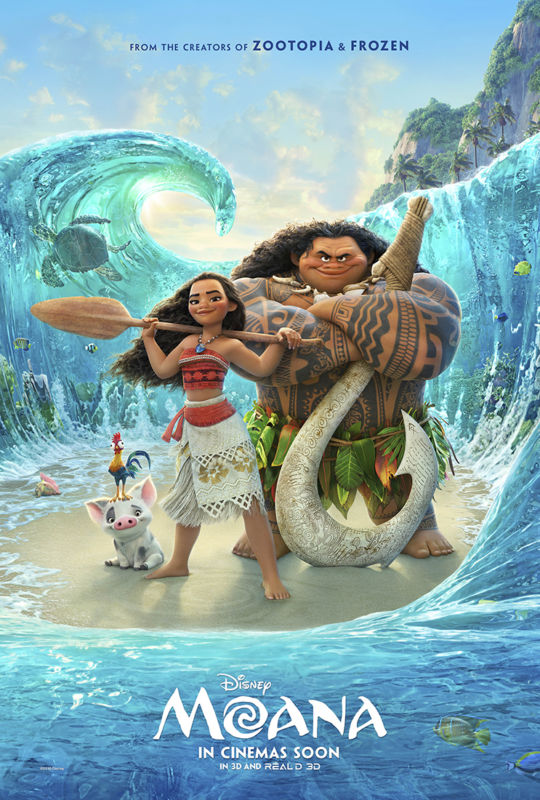 Moana is set in the Pacific islands where the greatest sailors in the world have masterfully navigated the vast Pacific for centuries discovering the many islands of Oceania. Moana is the adventurous teen girl who takes on the task of finding out why her ancestors stopped their voyages stopped for 1000 years. This beautiful captured film offers sweeping scenes of topical islands and endless oceans. TheCG-animation is incredible and I spent much of the movie trying to work out how on earth the capture the movement of water in animation!

Inexplicably drawn to the ocean, Moana (voice of Auliʻi Cravalho) convinces the mighty demigod Maui (voice of Dwayne Johnson) to join her mission, and he reluctantly helps her become a wayfinder like her ancestors who sailed before her. Together, they voyage across the open ocean on an action-packed adventure, encountering enormous monsters and impossible odds, and along the way, Moana fulfills her quest and discovers the one thing she’s always sought: her own identity.

We loved the vibrant colours of island life, the sing-a-long songs and mesmerising beauty of the ocean. The film’s overall message is one of how to make your mark and find your purpose in life and there’s plenty of girl-power to inspire the girls in your life. There were a few scary parts too which found my youngest (aged 6) creeping closer to me, but as with every good Disney film, good always triumphs in the end!

To help you find the time to enjoy some quality time with your own kids I’ve joined up with Disney to bring you a brilliant new competition that will help us round out the year quite nicely over here at Becoming you!

To enter all you need to do is complete the form below!

This year, Disney is bringing extra festive cheer to families this summer with the Happy Holidays From Disney promotion featuring the very latest and greatest DVD’s, toys, games, apparel and more from Disney and Disney•Pixar.

Be sure to look out for the new releases to DVD like Finding Dory and Pete’s Dragon (as well as a large bounty of catalogue titles starting from R49.95 for DVD’s) There are also great new toys like the Finding Dory Let’s Speak Whale figurine, Sofia the First and Frozen dolls, Winnie the Pooh 90th Anniversary Special Edition books and Moana toy sets. Not forgetting the new Rogue One: A Star Wars Story will be launching in cinemas on 15 December.

Top 10 Tips for choosing a flattering swimsuit (for Moms & those over 35!)