Africa is full of incredible places so I recently asked a few of the most well-travelled travel bloggers to share with me their favourite places in Africa. Before I knew it I had an over-flowing inbox filled with incredible places, experiences, islands, cities! People LOVE Africa!

Instead of 1 long post I’ve decided to break my feature down into a few posts each featuring 10 incredible African places! Once all the posts are up I’ll have an amazing round up of all the Best Things to do in Africa!

Today I’m sharing the Top 10 Places in Africa to visit. These have all been nominated by travel bloggers from around the world who are really well placed to suggest these places considering their jobs take them across the globe a few times a year. If they love these places they MUST be worth visiting!

Read on below to see if you agree with their suggestions… And if you don’t please leave a comment below and let me know which African places you would add to this list. One of the highlights of Africa, the Okavango Delta is a huge swampy oasis located in the Kalahari desert. It’s considered one the best safari destinations in the world, due to its rich wildlife and lush green surroundings. It’s home to some of the world’s most endangered animals and it has a unique, beautiful and complex ecosystem. Okavango caters mostly to wealthy travelers with luxurious camps in the Delta, but there is a hostel for backpackers with camping facilities. You can explore Okavango Delta on foot, by horse, by game drive or mokoro. A mokoro is a traditional wooden boat, which is perfect to navigate the narrow water ways (created by hippos). Another must-do is to take a flight over the Delta in a bush plane. It’s a place like nowhere in Africa!

Mountains of the Moon, Uganda
Nominated by James Ian at Travel Collecting There is nowhere else on earth like the mystical Mountains of the Moon. Straddling the equator, this mountain range, officially called the Rwenzori Mountains, has glaciers and fantastical plants endemic to these mountains. It can be approached from Uganda (Rwenzori Mountains National Park) or the Democratic Republic of Congo (Virunga National Park), though the Ugandan side is safer and more set up for trekking.  This is a serious trek that takes at least seven days.  Most of the plants grow in muddy bogs, so it can involve jumping from tussock to tussock to avoid the mud at times, but the rewards are worth it.  This is a magical land of mist, hidden lakes and enormous cabbage-like trees towering above you.  There are basic huts along the way, porters to help carry your gear and a guide to navigate the right way for you.  This truly is one of the most incredible treks in the world.

The Pyramids of Giza, Cairo, Eqypt

Nominated by Esther Namugerwa from The Adventurous Feet 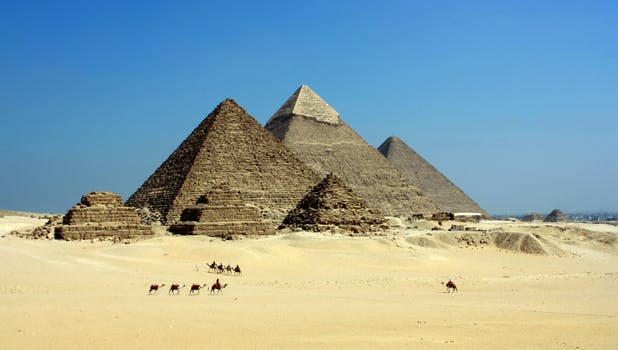 Built over 5000 years ago, The Giza pyramids are wonder like nothing on Earth and it’s no surprise it was named one of the 7 wonders of the ancient world.  The Giza pyramids which took over 15 years to be completed were originally built as tombs for the Egyptian Pharaohs but have now become the greatest landmark seated in the heart of Cairo city.  Over the years, the Giza pyramids have become the greatest tourist attraction in Egypt bringing in over 14 million tourists every year making it one of the most visited historical sites in Africa. There are 3 main pyramids at Giza; the great pyramid of Khufu, the pyramid of khafre, and the pyramid of Menkaure and just in the center of Giza lays the great sphinx which means “Father of terror” in Arabic. A visit to the Giza pyramids is considered to be a once in a lifetime experience. One of the most exciting and unique destinations in Africa is the Danakil Depression in Ethiopia  This region is known to have one of the most hostile life conditions in the world and the Depression consists of a huge salt desert and active volcanoes. While a tour into the Danakil Depression brings you to the rim of the Erta Ale volcano (where you can actually watch magma flowing at the bottom), you will also be able to visit the unique landscape of Dallol, where toxic sulphate formed a surface which looks like from another planet.

Nominated by Jo Cahill from Over the Edge of the Wild Situated at the highest point in the Rift Valley, the region around Lake Naivasha is a geologically and ecologically diverse area of Kenya. For travellers, this means plenty of photo opportunities. More than 400 species of birds have their homes around the lake – including the intimidatingly large marabou stork – and one of the highlights of the area is the opportunity to see hippos in the wild. Be careful though, hungry hippos are not as friendly as board games might have you think! Away from the lake itself, Naivasha town is a jumping off point for a walking (or cycling) safari through Hell’s Gate National Park and down into Njorowa Gorge, the setting for Scar’s betrayal of Mufasa in the Lion King. There aren’t any lions, but getting up close with the rest of the Circle of Life is well worth the experience. Etosha National Park in Northern Namibia contains the magnificent Etosha salt pan, the largest in Africa, and which is also visible from space. Forming part of the Kalahari Basin in the north of Namibia, it gets filled with watering holes that provide a meeting place for giraffes, elephants, gazelles, lions, hippos, and more. Designated as a World Wildlife Fund Ecoregion, it’s one of the only breeding grounds for flamingos in Namibia. I recommend checking out a night game drive, when the place really comes alive with nocturnal animals! The Kalahari in Botswana is a destination for adventurers who are looking for a real wilderness experience. Only accessible by 4×4 vehicles, the Central Kalahari Game Reserve guarantees big skies, vast views, and wildlife galore. And even better, you might not see another human for days. This is a land of deep sand, salt pans, predators, and desert-adapted antelopes like gemsbok and springbok. All the campsites are unfenced, be aware that wildlife like lions and leopards may walk by your tent at any time of day and night. Be prepared and self-sufficient and you might just find your next favorite spot on earth. Morocco is a fascinating country to visit. Most visitors stay for a city break in Marrakech or Fez, but if you venture inland to the Atlas Mountains, you find a quieter world of craggy, arid slopes dotted with traditional villages. For the very fit, climbing 4,167m high Mount Toubkal, the highest peak in North Africa, is a challenge not to be missed. We took it slightly easier and stayed at Kasbah du Toubkal in the village of Imlil on the slopes of Mount Toubkal. The Kasbah has unparalleled views, gorgeous terraces to relax on and also offers guided hikes. We opted for a two day hike through serene valleys to the Kasbah’s trekking lodge. It was a truly fantastic experience and one I’d love to repeat.

Nominated by Kesi from Kesi To and Fro 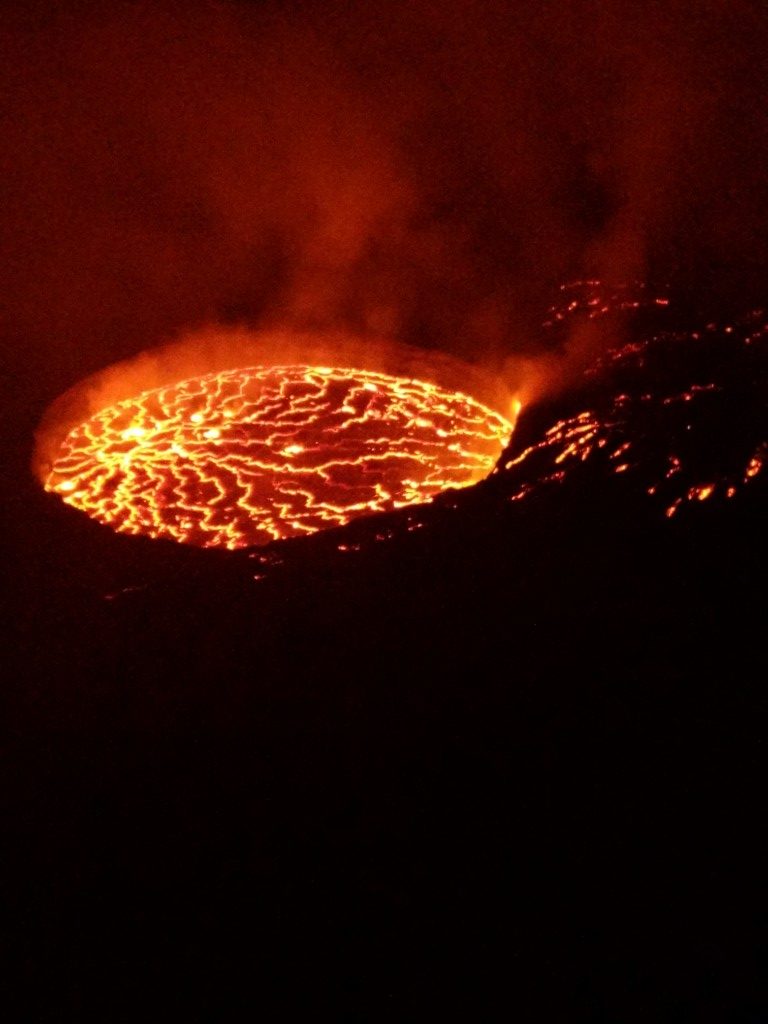 In my 3 years of travel, hiking up Mount Ngyirorya volcano to see the largest lava lake in the world has been one of my top highlights. This volcano is situated in Virunga National Park in the Democratic Republic of the Congo. It takes 6 hours to reach the top, but it definitely worth it!  Once the sun goes down, grab a tea and watch the lava – it has a life of it’s own. It really is a magical experience to see the lava bubble and pop. You camp overnight and can go observe the lava lake as many times as you’d like.

Nominated by Jurga from Full Suitcase If you are looking for unique interesting places to visit in Africa, I can highly recommend Kolmanskop ghost town in Namibia. Located near Lüderitz in Southern Namibia, Kolmanskop was a flourishing diamond mining town in the beginning of the 20th century. The town has been completely abandoned in 1956 and since then is slowly disappearing in the sand dunes of the Namib desert.

A local mining company has taken the place over, restored several buildings, and opened a museum. Tourists can now visit Kolmanskop Ghost Town on a guided tour, but after a short introduction you are also free to explore the abandoned buildings on your own. There are some real gems to be found and Kolmanskop is a true paradise for photographers. Not to be missed if you are visiting southern Namibia! Read more about this and other amazing places in Namibia.

What I... Rose from Go Travel Bug

My City: Things to do in Nashville, Tennessee (with kids!)