A visit to Grootbos isn’t only about the flowers, the food and the views… Located just outside Gansbaai, the shark diving capital of the world, a visit to Grootbos is also about experiencing the abundant marine life that call the waters of Walker Bay home!

Our last morning at Grootbos saw us heading out to sea to explore the waters of Shark Alley near Dyer Island. 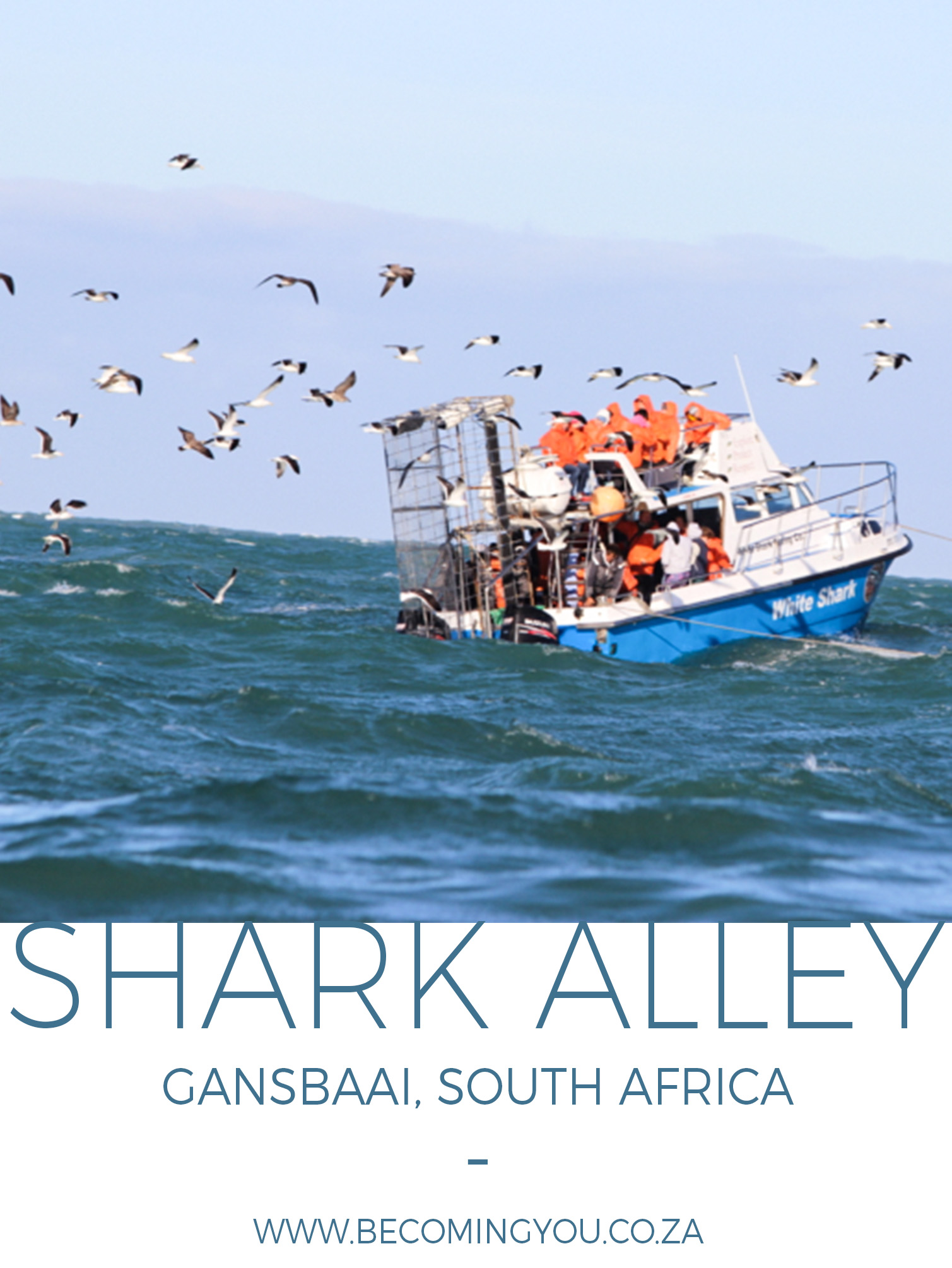 The weather was touch-and-go, there were high winds and rough seas and Marine Dynamics weren’t too keen to head out on our Eco Marine Safari, but eventually they made the call to go as there seemed to be a window of opportunity.

I was glad that they took the decision carefully and weighed up the safety of the vessel above the demands of the public! Much more important in my mind!

This proved to be one of the most adventurous things I’ve ever done (and I didn’t even do the shark cage diving!!) 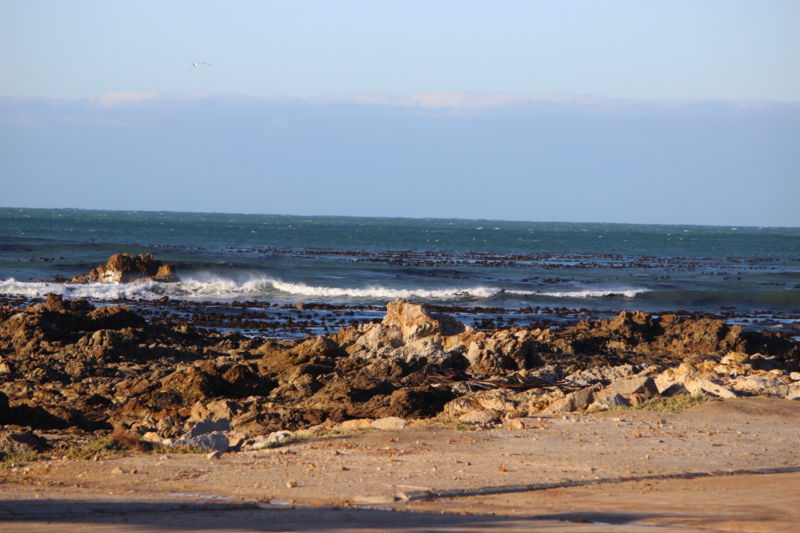 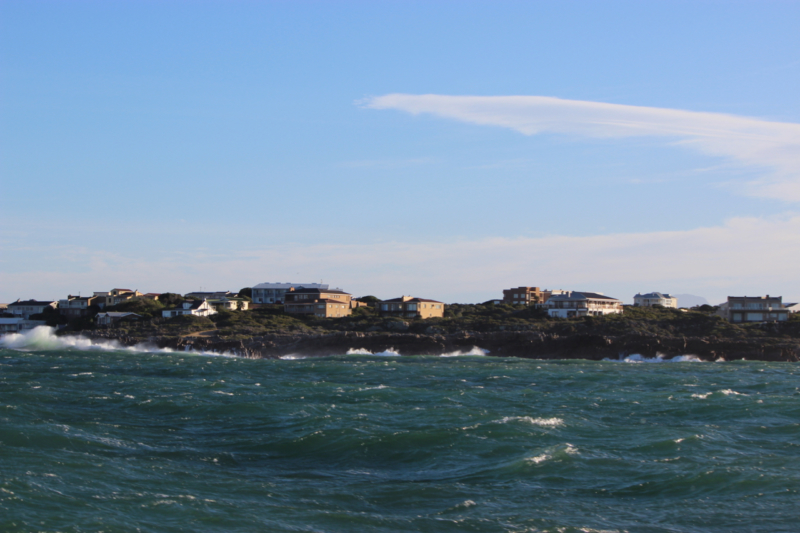 As predicted the seas were serious. We literally bobbed around like a cork in the ocean, sometimes unable to see the horizon due to the huge waves surrounding us. I would be lying if I said I was terrified! I was!! What made the whole experience seem even more terrifying was that this was “Shark Alley” Known as THE best place in the world to dive with Great White Sharks. Basically the waters beneath me were teeming with sharks and there was NO WAY I wanted to be going overboard.

We first made our way to where the shark cage diving boats were hanging out, hoping to catch a glimpst of a shark breeching, unfortunately things were quiet – I suppose they do have the ENTIRE ocean to enjoy! 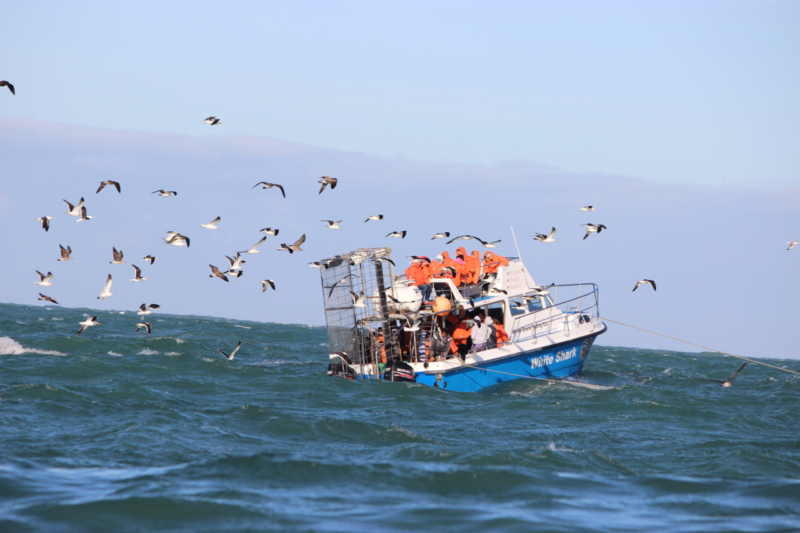 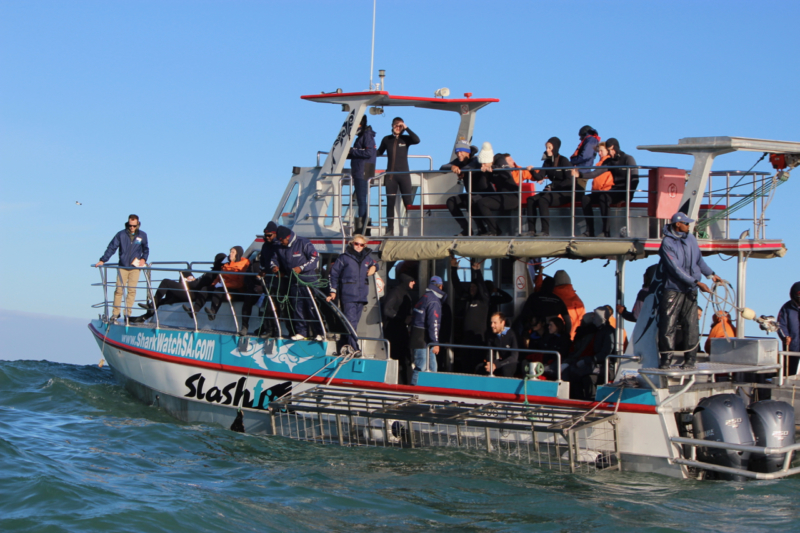 We then headed across to Shark Alley – a narrow strip of water between the marine bird paradise of Dyer Island and tiny sliver of rock known as Geyser Rock that the seals of these seas have made their own – almost 60 000 of them! 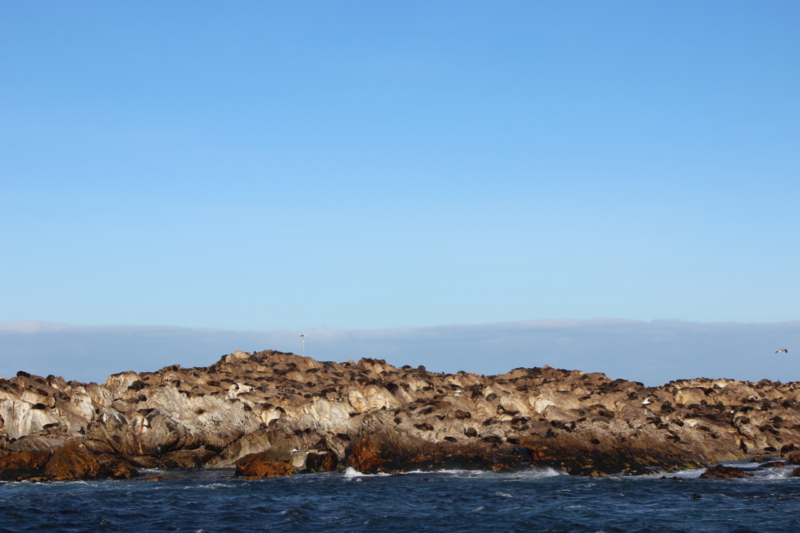 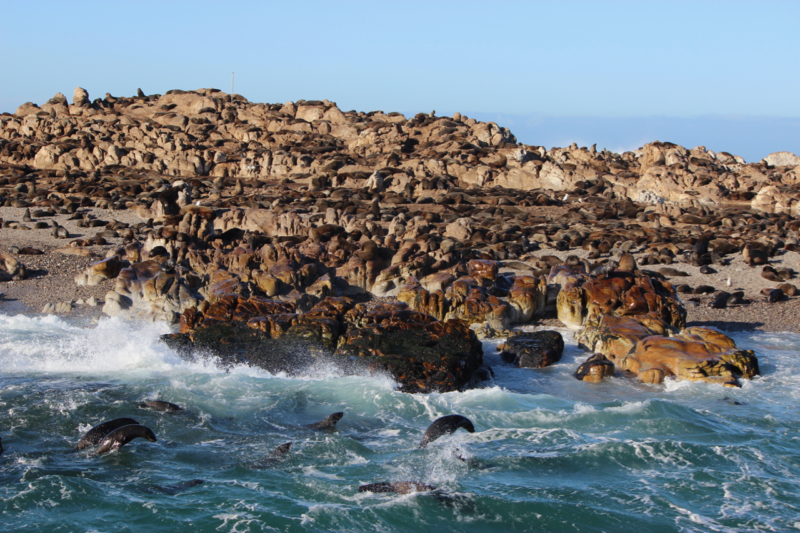 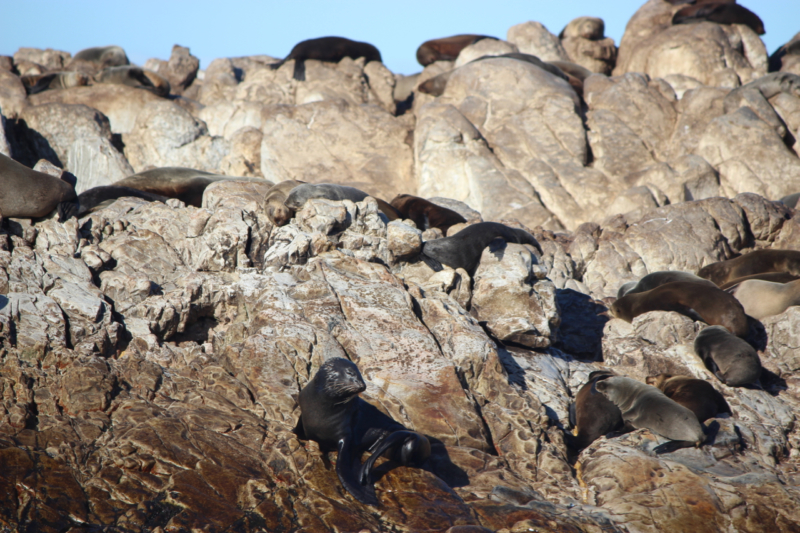 Every inch of rock on this little outcrop was covered by seals sunning themselves out of the danger of the shark feeding grounds mere metres from where they lay! The noise and the smell were something you had to experience for yourself 😉 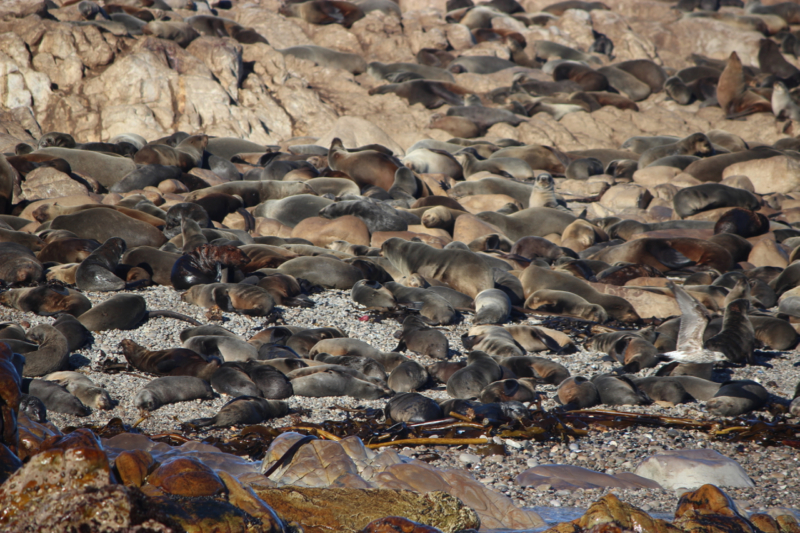 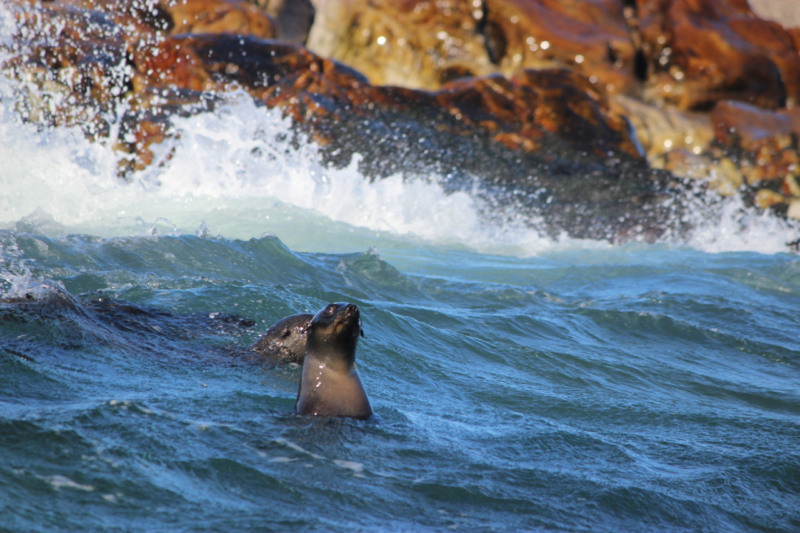 Fortunately the spot between the island and the outcrop, the “alley” so to speak, was far less rough which meant we could spend a bit of time observing the seals splashing about. We even spotted a lonely penguin amidst the seals.

A highlight was spotting 2 enormous marine birds with incredible wing spans cruising the air currents above the waves. 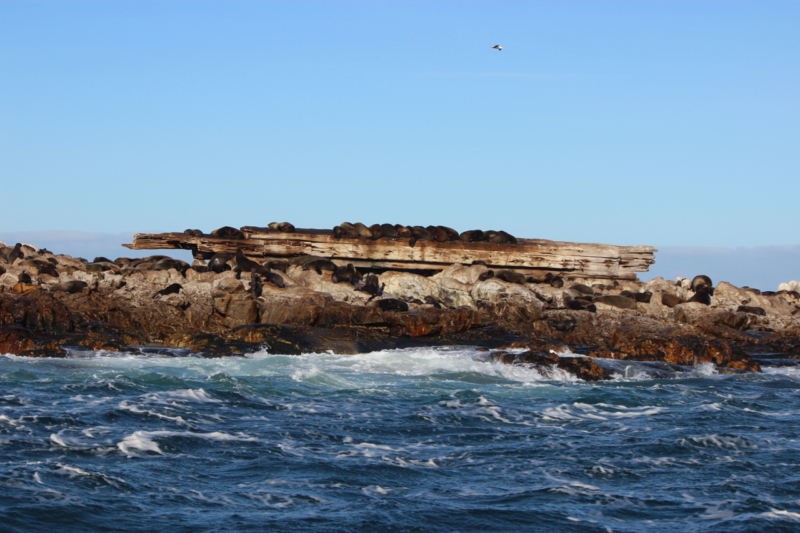 Our trip back to land was even more exhilarating, and terrifying, than before – the swell was the biggest I’ve ever seen and there were definitely parts of the trip when I held my fellow journalists hand despite the fact that we’d only known each other 3 days!!

I’m grateful for this marine experience, but I was never more excited to be back on dry land! And I realised that I’d probably not suited to the life of a pirate 😉 or even a marine biologist! 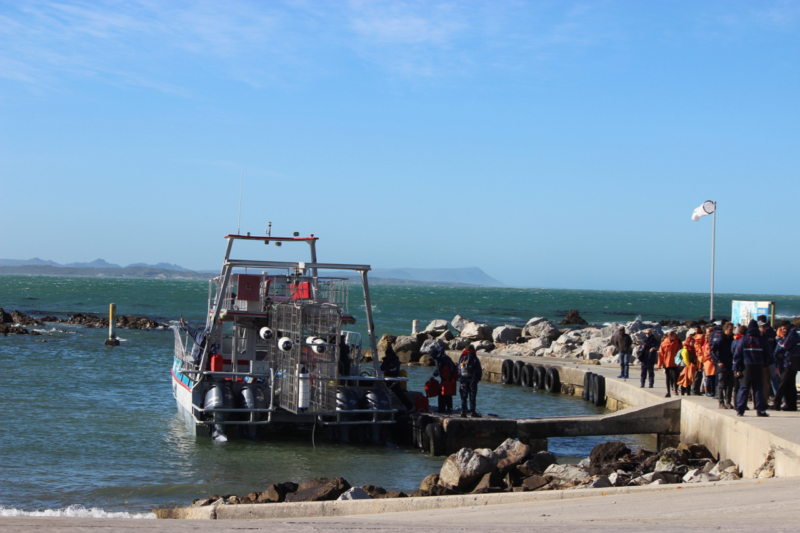 The Marine Dynamics Whale Watching or Marine Big 5 Trip is between 2 and 2.5 hours, depending on sightings and weather conditions. All cruises depart from Kleinbaai harbour near Gansbaai. Dyer Island is located 8 km from shore and is an access controlled Important Bird Area (IBA) for the conservation of its many resident bird species, including African penguins.

Top 10 Tips on How to Choose the right High School (incl a checklist!)