Last week I shared with you the final month of our Renovation Diary, but today’s post is actually the last post in the series….

As with most renovations ours went a bit over the schedule. But not by much. Only a week which I think is REALLY good going when friends of ours went over their schedule by 4 months!! Yikes! That requires super powers of patience.

We delayed our move back in by a few days (thankfully our rental agent was fairly accommodating).

When we finally did move back in things we still kinda crazy but we had to do it… we couldn’t afford another month’s rent and storage fees.

Renovating is expensive business and our budget was pretty tight from the start. At this point it was broken and bleeding on the ground 😉 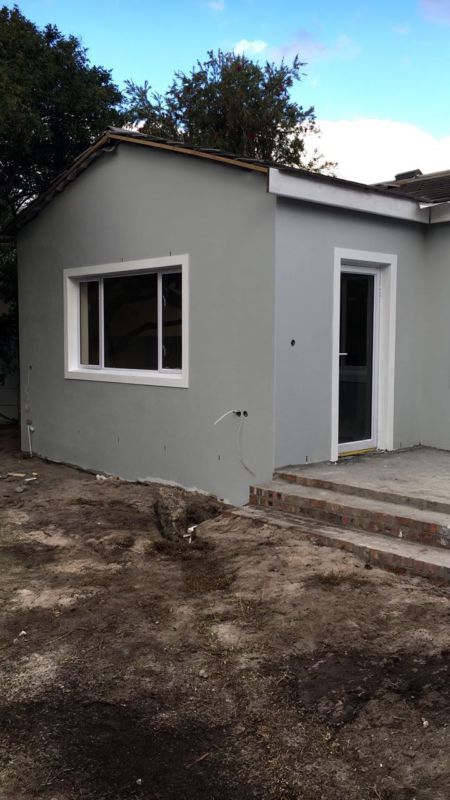 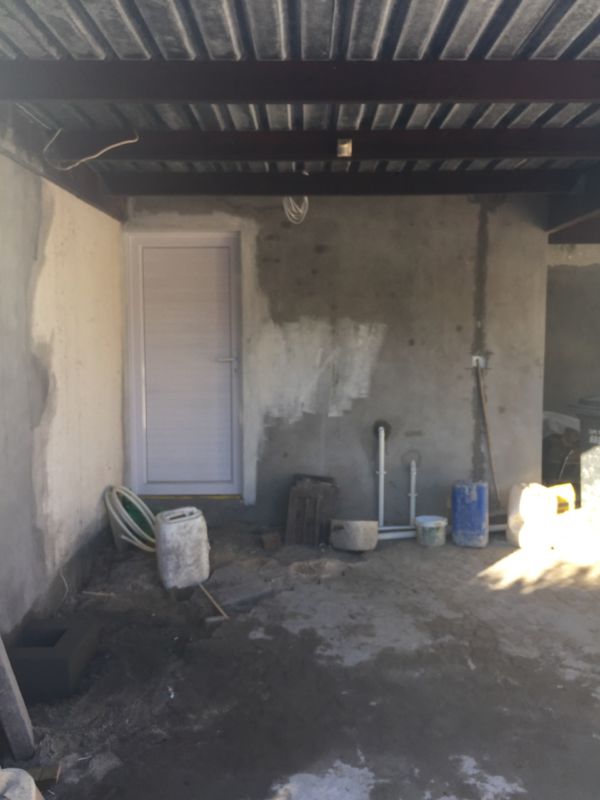 Our fourth month of renovations was all about the finishes. The outside of our house still looked very much like a building site but inside our laminate floors were laid in all the bedrooms, the skirtings and cornices went up, the missing doors and windows were popped in, the ceilings went in and our downlighters and uplighters and outside lights were working.
We ultimately decided to replace the steel window frames. We opted for aluminium windows and aluminium doors. Even though it would be slightly more expensive immediately, aluminium still was the obvious choice because it doesn’t need as much maintenance as wood, or steel. 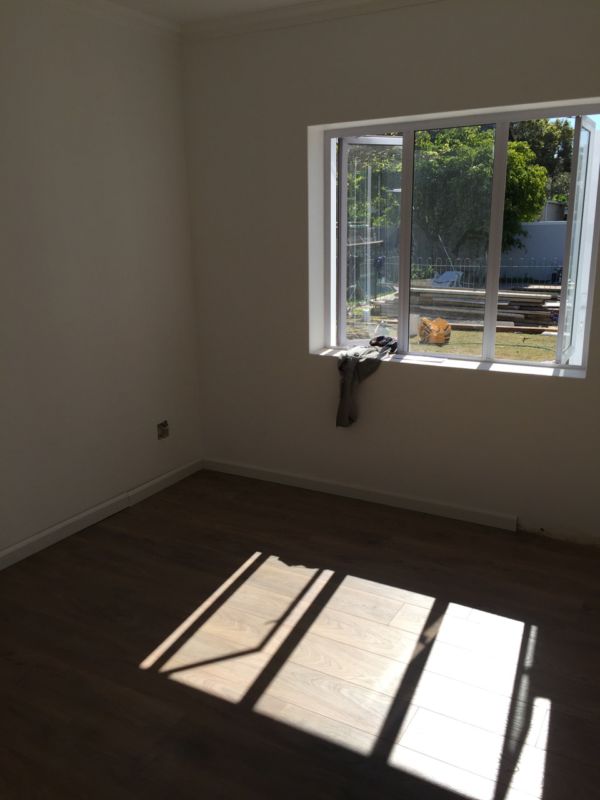 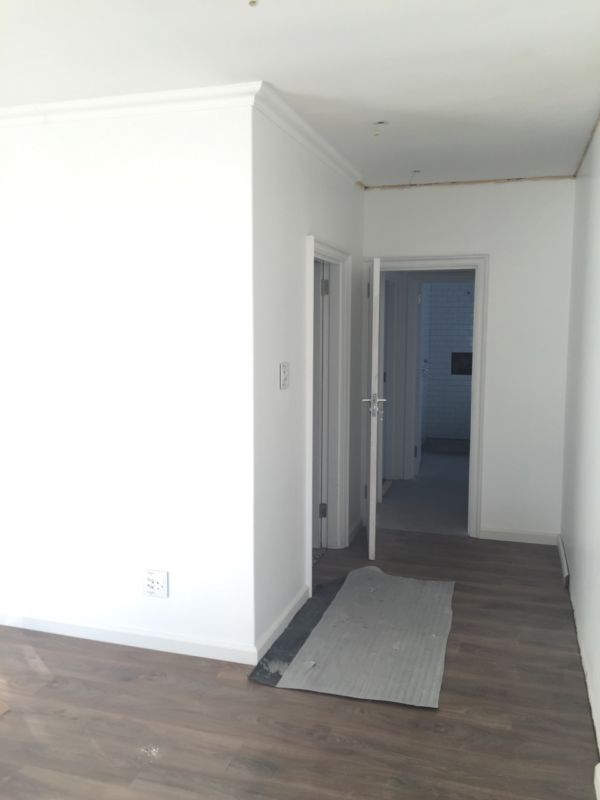 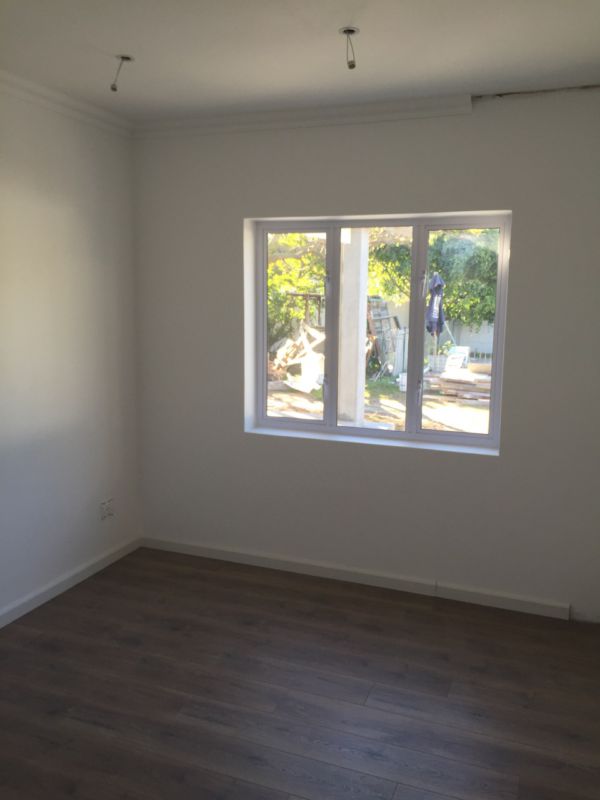 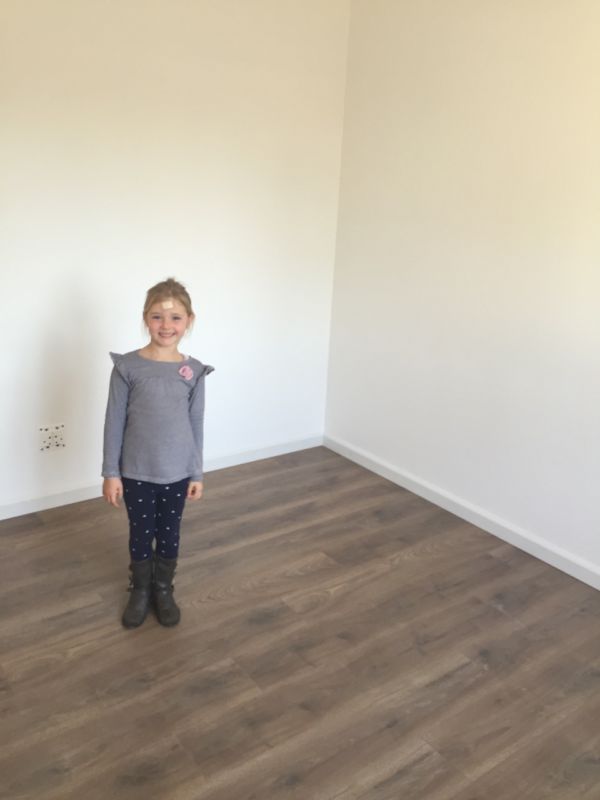 The bathrooms were almost complete sans a few issues with the Moroccan floor tiles (Hint: get someone to lay these whose worked with them before!) The toilets were working and our shower glass arrived so that meant we had one working shower….  and could move in! (Although there were still a few days where we could only use the bath so I had to go to the gym to wash my hair!!)

We had initially thought we would close the showers entirely and have glass doors but our budget ran out so we just opted for one glass panel and to be honest I’m actually quite happy with them just as they are now. The effect is more like a wet room but as our shower rose arm points straight down there is minimal splashing out onto the floor… and it’s really a non-issue. 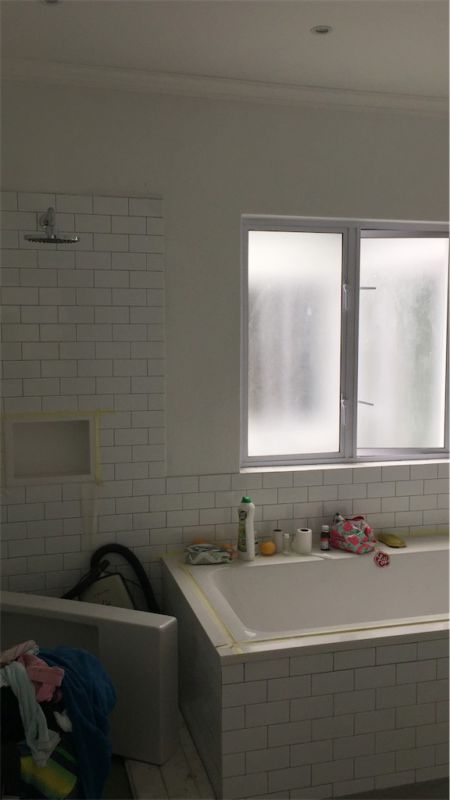 That’s the state of the bathroom when we moved in – the sink is still sitting in the shower waiting to be installed!

Then the built-in cupboards could start. Our kitchen lady also did these for us – in 3 bedrooms and the linen cupboard in the passage. As she worked on her own this part of the process did take quite a bit longer than we had anticipated. She started in the kids bedrooms, moved onto our room, then the passage and then, finally, the kitchen after our floor drying delays!

The whole process of getting cupboards and storage probably took a month! (I might have mentioned patience being a good virtue to foster while renovating!!) It was a slow season as we had moved everything in but couldn’t put anything anywhere!!

Initially when the storage van arrived to unpack our living area floors weren’t dry enough so EVERYTHING had to be crammed into 3 bedrooms. The boxes and furniture filled them up to the ceiling and the overwhelm of finding anything and, eventually, unpacking everything was extreme. I wouldn’t recommend this method! Wait a few days so that when the moving guys come to off load you can point them in the direction of the right room for each box. Ours were a complete jumble and it was impossible to find anything for weeks. Many tears of frustration and overwhelm followed. 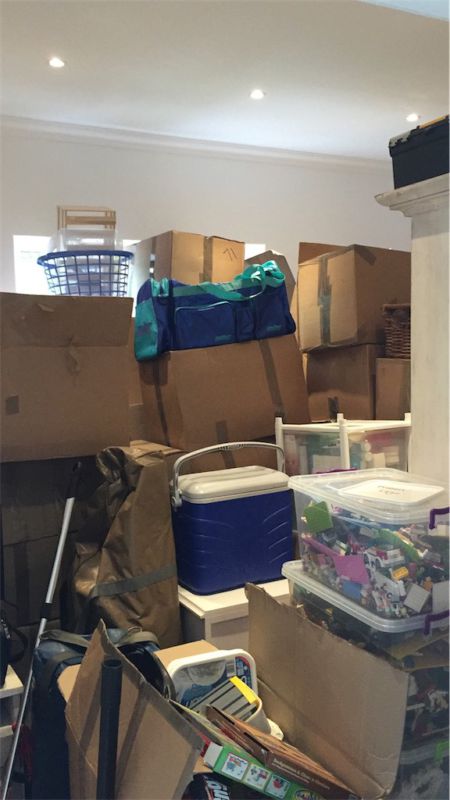 For 2 weeks we all slept in the main bedroom surrounded by bags of clothes. I worked from the tiny desk in the corner. We lived on takeouts and generous family and friends who dropped off a meal or invited us around.

Each step forward felt like a huge victory… the first braai a particular celebratory one even though it was just the four of us eating boerewors (& nothing else) on our paper plates!!! One bedroom became vacant and we could move both the kids mattresses in there for them to have their own space. Then another room opened up and the kids each had their own room – all the while still living out of bags and boxes.

Fiona’s handy work starting paying off and we could unpack our clothes and toys… some of which we hadn’t seen for 6 months. Christmas and birthdays rolled into one!

And then our kitchen began to take shape. We lived without a kitchen for almost a month! (Unfortunately I don’t have too many photos of this season because my phone with them on was stolen!)

Ultimately we survived… Yes, it was uncomfortable for a few weeks. The cleaning and cooking situation was less than ideal, but the truth is that we had a roof over our head and we were together, safe, warm and dry! Our set up for these few weeks is still probably FAR better than what the majority of South African’s live with on a daily basis and it was a real wakeup call for us to acknowledge our privileged position… whenever we felt like complaining we reminded ourselves of this fact… and said a prayer for those less fortunate than ourselves… those living in worse conditions in SA and the thousands of refugees around the world who no longer have a place to call home.

Home is a privilege and we are so grateful for ours….

Come back next week Thursday for the very first Room Reveal!!!

The Ethics of Animal Encounters