When I first embarked on my home renovation project I had every intention of sharing the process on a weekly basis in a Renovation Diary series. I realised pretty quickly that was going to be impossible!

Then I aimed to do a summary of the progress every month and I did quite well for the first two months but to be honest the project took on a life of it’s own after that and every bit of my energy went into actually project managing everything rather than writing about it!

We were living out of our home for 3 months and my blogging routine took a bit of a knock, in fact my entire life did!!

Anyway I still managed to take photos of the progress and really wanted to share them with you here to give you a good idea of what goes into a home renovation. Hint: It’s pretty much hell for a while 😉

So before I begin my Room Reveal series I have to finish off my Renovation Diary series. Sorry if it’s a bit delayed now… I just wanted you to see the whole process from start to finish.

We had moved at the beginning of June after living in a building site for 2 weeks. Month 1 saw most of the demolition work take place. It happen really quickly and before I knew it I owned a shell of a house! Crazy. Read my Month 1 Renovation Diary!

Month 2 was July, the depths of winter, but fortunately for us the winter weather held off which meant we had mostly dry days and our building team could get cracking with the actual build. Walls went up and finally we got a roof again after almost a month without one! Read my Month 2 Renovation Diary.

Month 3 was the month of August. And at this point I was starting to loose the plot a bit. What they don’t tell you about renovations is that there are SO MANY DECISIONS. And even if you get a head start like I did and go shopping around for taps or light fittings… there’s still something else that needs deciding on. It was never ending!

Our home was starting to take shape at this stage. This was good news considering we had only booked our short term rental and storage unit for 3 months and this would be the last month!

Painting and finishing started to take place. Tiling started to happen. Bathroom fittings were installed. The electrics and plumbing went in. Windows and doors arrived and were fitted in drips and drabs as they were ready from the supplier. 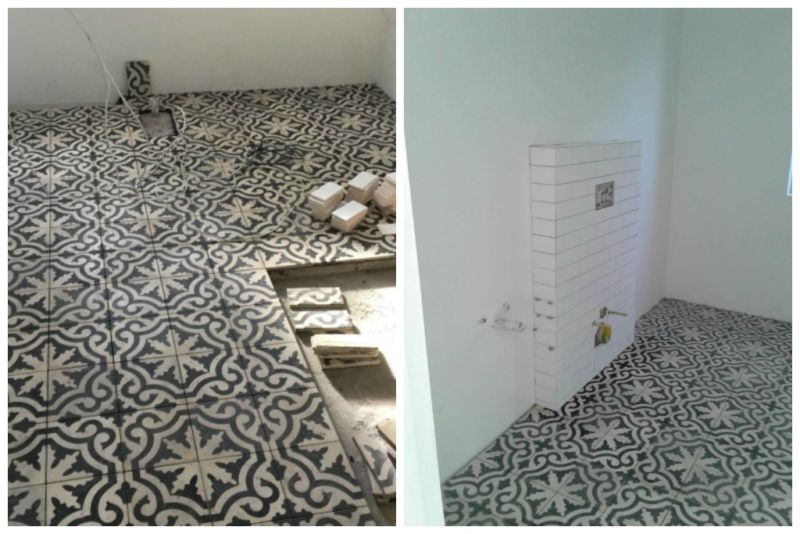 The floor was started and left to dry for a few weeks. This was probably the biggest headache for us in our renovation project. In my mind I had envisaged a polished smooth cement floor which I tried my best to explain to the builder but what I had neglected to find out was that the floor I loved was what you call “power floated” and required a lot more effort than I thought. Our floor ended up being a much rougher more industrial floor in a light cement colour… There was a lot of delay for this floor and we still didn’t get something we were entirely happy with BUT over time I’ve actually come to appreciate it’s rugged beauty and today I can say I’m quite happy with it. 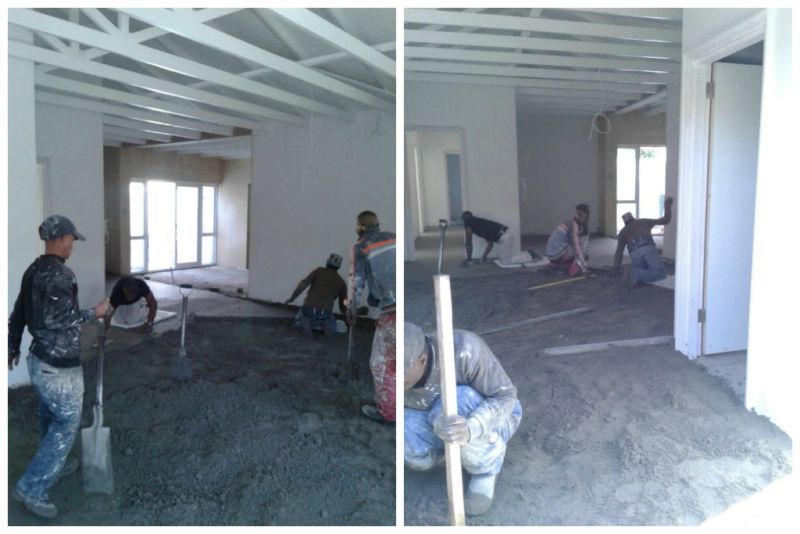 The thing about renovations is that they are stressful. You are basically functioning under the most amount of stress you will probably ever live through. It’s intense. And your emotions run high. With each other. With your builder. With the outside suppliers. It’s a real effort to keep your cool when things go wrong. And they will. This is building. It’s a work in progress. It’s never going to be perfect. The earlier you can come to terms with that the better for yourself and everyone else involved. You have to let go of the perfectionist in you and make peace that certain things will not be EXACTLY as you had envisaged and that is OK. Mistakes happen. Accidents happen. Shit happens!

The process of renovating my home sucked me dry when it came to my perfectionist tendencies. I will admit that there were tears at times when things went “wrong” but overall I think I managed to keep my cool better than most.

A lot of the stress was brought about by living out of your routine and comfort zone. But that being said I really wouldn’t recommend living on site through a home renovation. I really don’t know how people remain sane while living surrounded by builders and under a cloud of dust. It would have finished me off if we’d lived on site as we had initially thought we would do to save some cash. The cash we paid towards renting a small spot for 3 months was worth every penny! 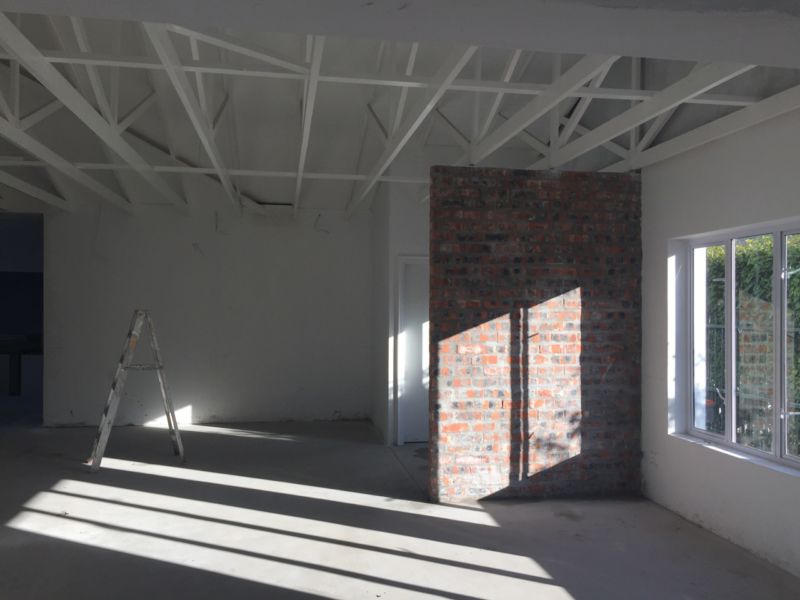 During this month I actually managed to “escape” on a press trip for almost 3 weeks. It wasn’t the best timing to be honest but it was the chance of a lifetime and I had to grab it. I kept up to speed with the developments via photos and voice notes on Whats App so whenever there was an issue or decision to be made my builder could get in touch. I had actually bought everything in advanced and arranged for it to be delivered on site and I’d made as many of the decisions as possible in advance. I think being able to step out of the chaos for a bit probably saved my sanity during this process but I also think it pushed my husband to the brink… being left as a single dad with a day job AND a home renovation! Sorry love xxx

When I came back the house didn’t seem too different from when I had left 3 weeks before but that was mostly because a large portion of the time I was away was spent waiting for the floor to dry, and doing fiddly little changes that weren’t as obvious as the previous 2 months. 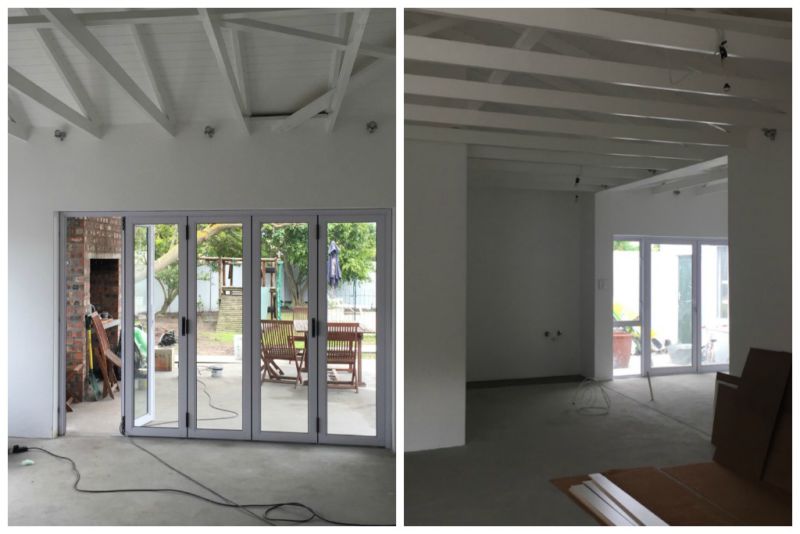 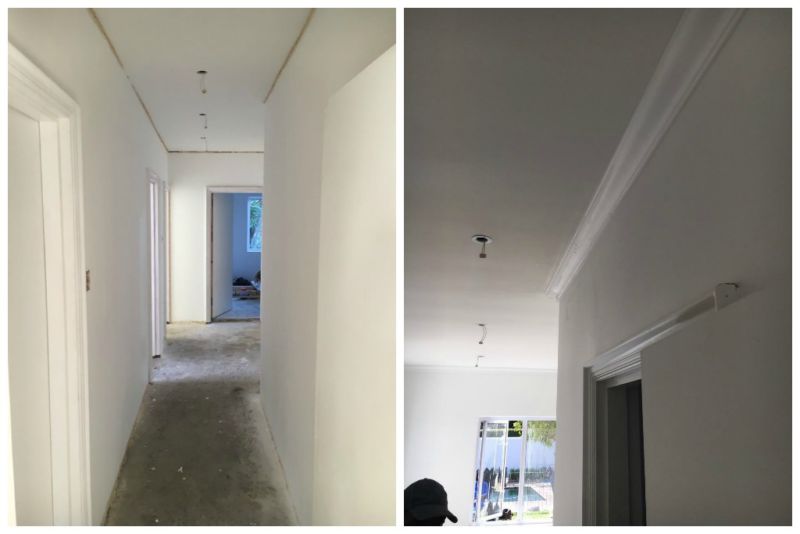 I think the 3rd month of renovations can feel like things start to slow down esp after all the big changes initially. This can be the time when energy and excitement levels wane and the whole thing starts to feel like a bit mistake… with no end in sight!

As the beginning of September loomed, our move back in date, we started to panic. There was NO kitchen, a few missing doors, no working shower….

But we kept the pressure on and I can honestly say that our building team were incredible. They showed up every day willing to make this happen for us. We really felt like they were on our side and wanting this project to come to fruition as much as we were. I’m so grateful to our builder, Donovan Potts, who kept me updated with the progress every day. He may not be strong when it comes to his quoting BUT what I can say is that what he lacks in admin skills he makes up for in his project management! He kept his guys motivated ’til the last and made sure the product he delivered to me at the end made me happy. His main motivation was my happiness and it really made all the difference. I’m sure I stressed him out at times but he always showed up with a smile and was very ready to chat things through and to find a solution when there was a problem. On this project we were a team. It made all the difference. I don’t think I’ve met anyone else who can say they enjoyed working with their builder and can recommend them. They don’t often leave good impressions!

Come back next week to read my Renovation Diary Month 4 to find out whether we actually moved back in on 1 September as was our plan!!

What I... Ashleigh from Fit Mom