Last Thursday I headed out across Cape Town to the Northern Suburbs (it might as well as be the Northern Hemisphere when you come from the Southern Suburbs!!) I had been invited by Dr Hauschka to attend a High Tea at the beautiful Rust-en-Vrede building in Durbanville along with a friend. We arrived and were greeting by a lovely sun-filled courtyard filled with tables of ladies chatting. At our places we each received a lovely gift of a toiletry bag, a make up pouch and a few samples of Dr Hauschka’s wonderful natural skin and beauty products – the hand cream came out immediately and went straight into my handbag! 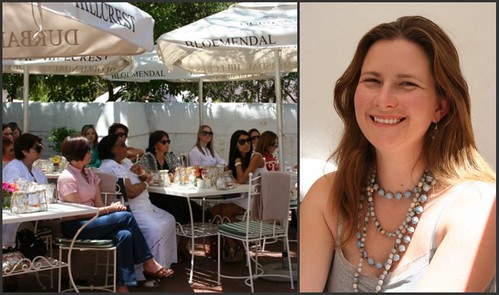 After being welcomed by the Marketing Manager, Victoria Sutcliffe, we were given a hugely informative talk by owner of Tocara Skin and Body Science – Caro Copeland. The topic of her talk was on all the “bad” ingredients that are found in skin and beauty products these days. I have had some exposure to this information before and have been trying to go as “green” as possible in all areas of my life (changing one product at a time) but there was still so much that I learnt! Previously I have done an article on all the “green” products we now use and I plan to rewrite it with some updates soon. A new conversion in our home just in time for Summer is to Sunumbra sun tan lotion for adults and kids. 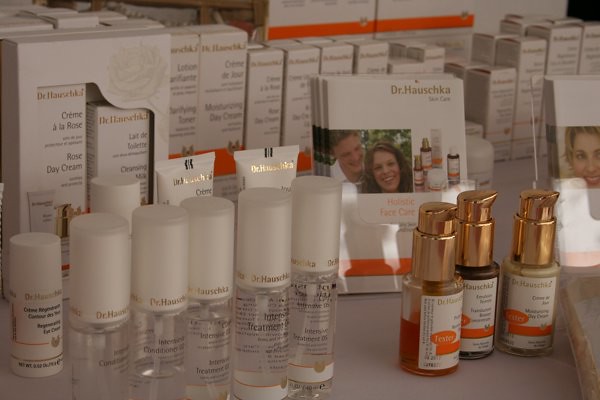 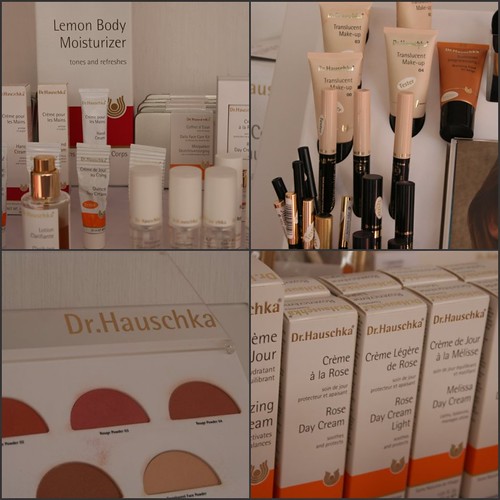 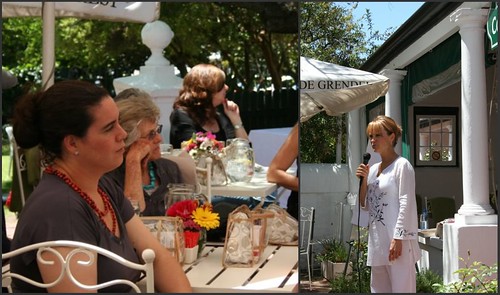 While listening to the talk I managed to jot down a few of the main ingredients to avoid so that in future when purchasing skin and beauty products I can check the labels in the shop. I thought some of you might be interested to know what they are so here is the list*:

1. Phthalates
Phthalates have been shown to damage the liver, kidneys, lungs and reproductive systems in animal studies, phthalates can be absorbed through the skin or inhaled. Scientists at government agencies in both the U.S. and Canada agree that exposure to the chemicals could cause a wide range of health and reproductive problems in people. Manufacturers use phthalates because they cling to the skin and nails to give perfumes, hair gels and nail polishes more staying power. But a recent study by the U.S. Centers for Disease Control and Prevention (CDC) found that five percent of women between age 20 and 40 had up to 45 times more phthalates in their bodies than researchers initially hypothesized. CDC found phthalates in virtually every person tested, but the largest concentrations — 20 times higher than the rest of the population — were found in women of child-bearing age. Meanwhile, another study, led by Dr. Shanna Swan of the University of Missouri, identified developmental abnormalities in male infants correlating to high phthalate levels in their mothers’ bodies. The non-profit Environmental Working Group launched the Not Too Pretty campaign in 2002 to raise awareness about the dangers of phthalates, industrial chemicals that are used as solvents in many cosmetics. Most of the mainstream hair sprays, deodorants, nail polishes and perfumes that millions of people use every day contain these harmful chemicals. Phthalates are also employed as plastic softeners in many different consumer products, including children’s toys and medical devices.

2. Parabens
Methyl and Propyl and Butyl and Ethyl Paraben are used as inhibitors of microbial growth and to extend shelf life of products. Widely used even though they are known to be toxic. Have caused many allergic reactions and skin rashes. Methyl paraben combines benzoic acid with the methyl group of chemicals. Highly toxic.

3. Formaldehyde (yes the stuff used to preserve dead bodies!)
Formaldehyde can be found in nail polishes, nail hardeners, eyelash glues, hair gels, soaps, makeup, shampoos, lotions, and deodorants, among other products. An article published in the April 2010 volume of Contact Dermatitis looking at products from the FDA’s Voluntary Cosmetic Registration Program database found that nearly 20 percent of products contained formaldehyde or formaldehyde-releasing preservatives. The two known categories of products with the most formaldehyde are hair straightening treatments and nail hardeners. The most common side effect of formaldehyde in cosmetics is skin irritation, including scalp burns and hair loss, according to Alexandra Scranton, Director of Science and Research for Women’s Voices for the Earth, a national organization that works to eliminate toxic chemicals impacting women’s health. But that’s not very likely with the low levels typically found in cosmetics, unless a person is highly sensitive to the substance, she says. Plus, low levels of formaldehyde have been found to cause irritation of the eyes, nose, throat, and skin. But the major concern is that formaldehyde causes cancer. The National Toxicology Program’s June report classified formaldehyde as a carcinogen under conditions with high or prolonged exposure—conditions typical for industrial workers and professional groups, including embalmers and even salon workers. These exposures typically do not occur in cosmetic and personal care products. Hair smoothing treatments like the Brazilian Blowout came under fire earlier this year when the federal Occupational Safety and Health Administration warned that its products contained unacceptable levels of formaldehyde. In some cases, salon workers complained of nose bleeds, eye irritation, and trouble breathing after using the products.

4. FC & C Colours
The synthetic colors used to supposedly make a cosmetic “pretty” should be avoided at all costs, along with hair dyes. They will be labeled as FD&C or D&C, followed by a color and a number. Example: FD&C Red No. 6 / D&C Green No. 6. Synthetic colors are believed to be cancer-causing agents.

5. Sodium Lauryl (Laureth) Ether Sulphate
Also known as SLES is a detergent and surfactant found in many personal care products (soaps, shampoos, toothpaste etc.). SLES is an inexpensive and very effective foaming agent. SLES, SLS and ALS are surfactants that are used in many cosmetic products for their cleansing and emulsifying properties. They behave similarly to soap. Although SLES is considered safe at the concentrations used in cosmetic products, it is an irritant similar to other detergents, with the irritation increasing with concentration. SLES has been shown to produce eye or skin irritation in experimental animals and in some human test subjects. The related surfactant SLS is a known irritant, and research suggests that SLES can also cause irritation after extended exposure in some people.

6. Perfume or Fragrance
A generic term and can be natural or synthetic fragrance best to choose a more natural product as obviously then they will only use natural fragrance. Synthetic fragrance can be a neuro-transmitter
Petrochemicals are chemical products derived from petroleum. Some chemical compounds made from petroleum are also obtained from other fossil fuels, such as coal or natural gas, or renewable sources such as corn or sugar cane.

7. PEGs (polyethylene glycols)
These are petroleum-based compounds that are widely used in cosmetics as thickeners, solvents, softeners, and moisture-carriers. PEGs are commonly used as cosmetic cream bases. They are also used in pharmaceuticals as laxatives.
Depending on manufacturing processes, PEGs may be contaminated with measurable amounts of ethylene oxide and 1,4-dioxane. i The International Agency for Research on Cancer classifies ethylene oxide as a known human carcinogen and 1,4-dioxane as a possible human carcinogen. Ethylene oxide can also harm the nervous system ii and the California Environmental Protection Agency has classified it as a developmental toxicant based on evidence that it may interfere with human development. Also avoid Petrolatum or Mineral Oil!

8. DEA is diethanolamine
This is a chemical that is used as a wetting agent in shampoos, lotions, creams and other cosmetics. DEA is used widely because it provides a rich lather in shampoos and keeps a favorable consistency in lotions and creams. DEA by itself is not harmful but while sitting on the stores shelves or in your cabinet at home, DEA can react with other ingredients in the cosmetic formula to form an extremely potent carcinogen called nitrosodiethanolamine (NDEA). NDEA is readily absorbed through the skin and has been linked with stomach, esophagus, liver and bladder cancers.

I am certainly going to be taking onboard Caro’s information and am very keen to get my hands on a copy of The Green Beauty Guide, as recommended by Caro, as soon as possible to make sure I’m not causing more harm than good to myself and my children with the products we use in our home. What are your thoughts about this topic – I realise it is quite a controversial one as many people can’t believe that big beauty brands could knowingly be harming our health…. Also as someone pointed out the “natural” beauty industry is using this information as a marketing strategy too!! I am always keen to hear your opinions and believe everyone is entitled to theirs as long as they have researched the info for themselves and made an informed decision! Type any question related to this topic into Google and you will find more information than you could read in your lifetime!

* Expanded info on each ingredient and the dangers thereof has been provided by Tocara.

What I.... Lauren from Glossary