One of the best ways to discover a city is with a local… and the My City (with kids!) series aims to be just that… An insider guide to cities around the world, especially for those travelling with kids.

If you are planning a visit to San Antonio, Texas then this post should come in very useful! 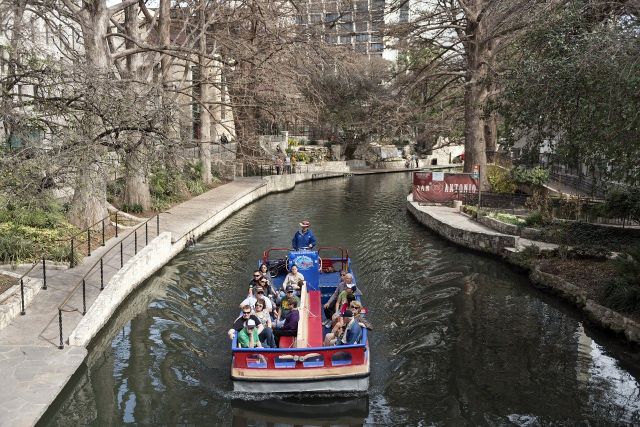 Local travel blogging mom of 3, Jill Robbins, has lived in San Antonio for six years – this time around.

She grew up in San Antonio since her parents moved there from West Virginia when she was a small child. She moved away for work as an adult and then moved back again.

She lives with her two youngest kids aged nine and 10 and also has a 27-year-old daughter (yes she knows that’s a big gap between kids!) who lives in Rota, Spain. 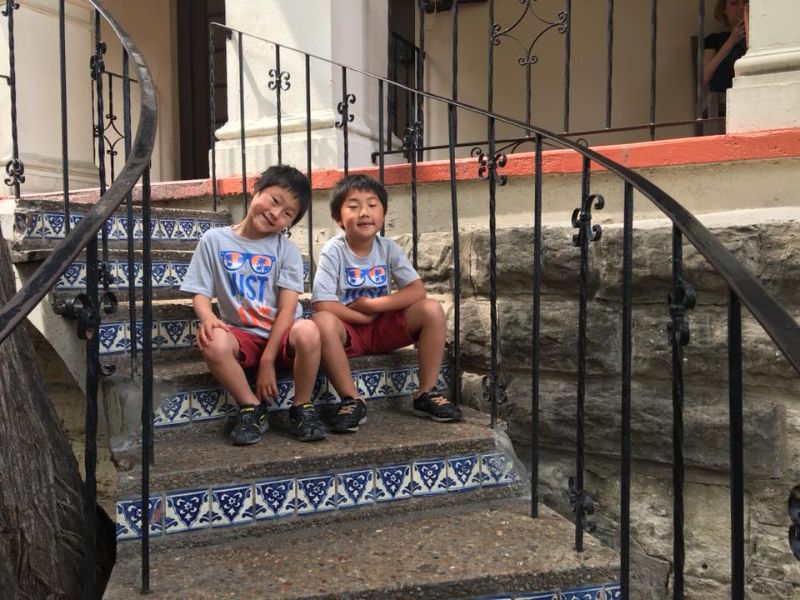 Best place to visit in San Antonio, Texas with kids

It is really hard to have a favorite spot in San Antonio because there is so much to do and we have so many memories here. If I have to pick one, it would be the San Antonio Zoo and the surrounding Brackenridge Park. 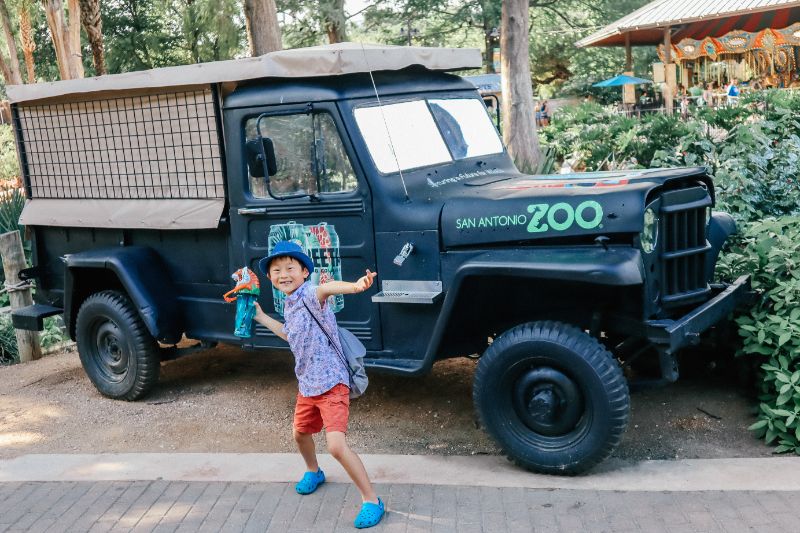 The zoo is a touch point in so many of my memories as a child and with each of my kids. They’re always changing things, expanding, and becoming more focused on education and conservation but a lot of the familiar landmarks are there. For me, it’s “the same but different” every time we go. 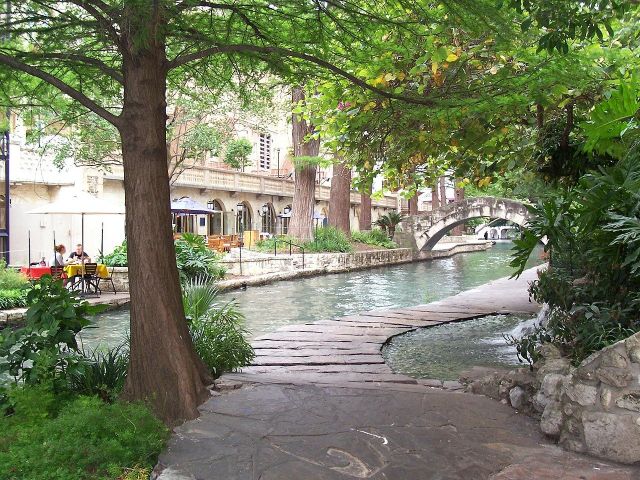 My kids’ favourite outing is The Doseum, which is a museum for children focused on hands-on and STEM activities. They have a lot of fun things to do indoors and outdoors. The outdoor areas are my favorite and they range from climbing structures to a peaceful reading garden. The most iconic place to visit in San Antonio, Texas

The Alamo. Most people want to see it when they come to San Antonio, even though I personally think it is a little underwhelming unless you spring for a docent-led tour and go during a time when The Alamo offers living history experiences.

Most kids probably aren’t going to be too into The Alamo unless they’re history buffs, and most kids are not. However, the living history actors that appear on the grounds are game changers. They’re wonderfully in character and they entertain as well as teach about Texas history.

Entrance into The Alamo and grounds is free and there’s also a free movie that’s played throughout the day that gives information on the history of this famous mission. The docent-led tours are expensive ($15 per person) but I think they’re worth it. 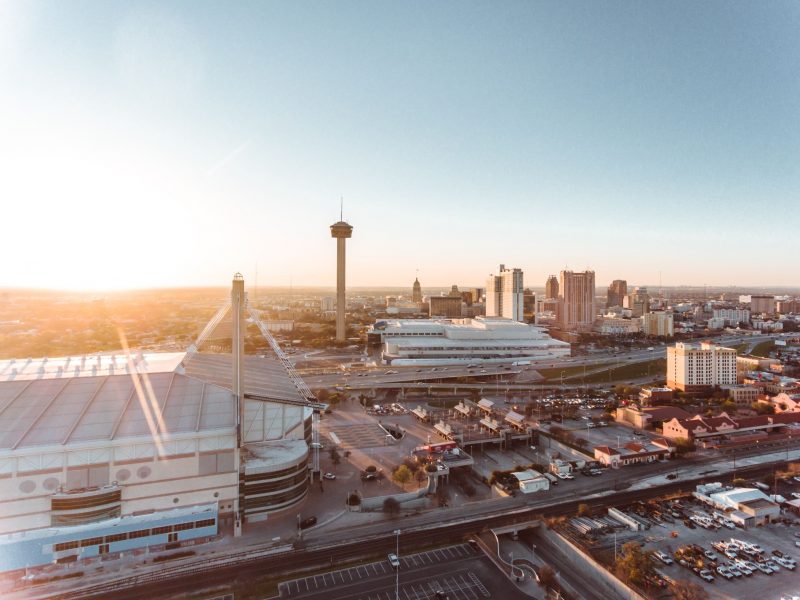 The Witte Museum. There’s a saying in Texas: “If you don’t like the weather, wait five minutes and it will change.” I mention this because although The Witte is a great indoor activity, it also has lovely grounds and places to explore outside. But, there’s plenty to do indoors.

The Witte (my kids call it “The Woody” which always makes me laugh) has static exhibits on natural history, Texas history and Texas culture – a little bit of everything under one roof. There’s also the HEB Science Tree House, which is a fun rooftop area that focuses on hands-on STEM activities for kids. 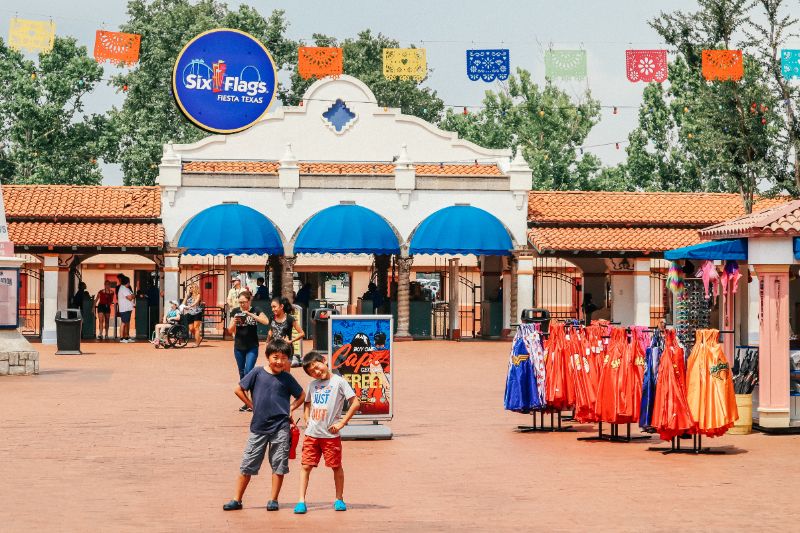 If theme parks aren’t your thing, you can also check out The Pearl, which is a shopping/dining/entertainment complex and home to The Hotel Emma, which is one of the nicest places to stay in San Antonio. There’s a lot of spaces for kids to run around and play, as well as a splash pad for enjoyment during warmer months (which in San Antonio is most of the months.)

Best free thing to do in San Antonio, Texas

Explore the Japanese Tea Garden. It’s a beautiful, peaceful park and completely not what you’d expect in San Antonio. Many people come here to have their wedding, engagement and senior pictures taken…it’s a great place to explore if you’re an active family. 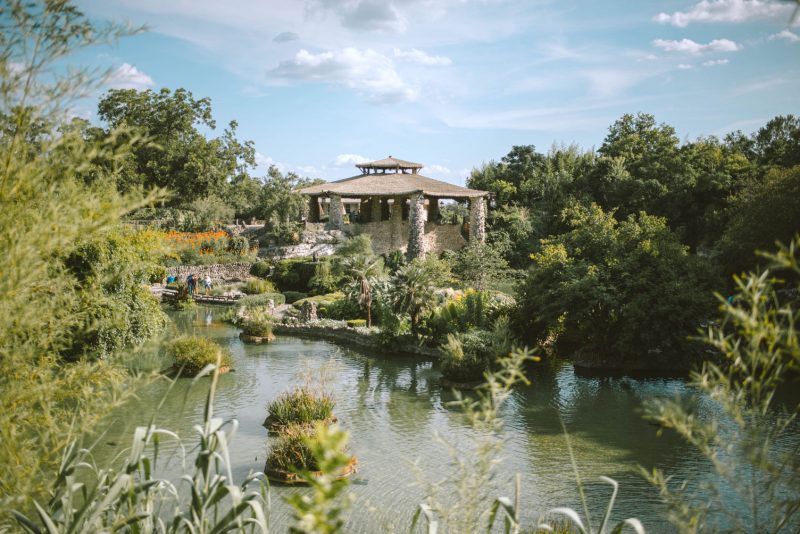 The paths are paved and easy to walk on, although they’re not 100 percent handicap accessible or stroller friendly.

Runner ups are Alamo Plaza and La Villita (the little village) and of course, the famous River Walk.

Go to the other missions. The Alamo (also known as Mission San Antonio de Valero) is one of five missions in San Antonio. The others are San Jose, San Juan, Espada, and Concepcion.

The Alamo is the most famous but it is also the least architecturally impressive and it is located smack in the middle of downtown. The other four missions aren’t far from town but they have a much more remote vibe to them with beautiful grounds that are fun to explore.

You can get your family picture in front of The Alamo but it will probably have a couple of vendor carts as well as a bunch of tourists in the background. You’ll get a Christmas Card or Instagram worthy snap in front of any of the other missions that will be so much better.

If you are staying downtown and don’t have a car, you can take the Via VIVA Missions bus route. The VIVA is a specialized line of bus routes that are designed to take visitors to San Antonio’s most iconic spots. Other routes are Arts and Culture and Centro. If you’re staying in downtown San Antonio, there are plenty of convenient spots to catch the VIVA Missions bus route. It’s $2.75 for an all-day pass.

Oh gosh, this question was hard because most restaurants in San Antonio, except for fine dining, are generally kid-friendly.

I’m going to pick Cheesy Janes at Broadway and Hildebrand. It’s mostly a burger place, although they have some other kinds of sandwiches, salads and a couple of Tex-Mex items (nachos and chalupas.) They’re famous for their large milkshake menu and the electric train that runs along the track near the ceiling. This is a locally owned and super casual place that’s located near the zoo, Brackenridge Park, The Witte Museum and The Doseum.

San Antonio is known for Tex-Mex and BBQ. Don’t leave town without sampling these things. Most eateries offer a child’s plate or are willing to make one up or make suggestions. 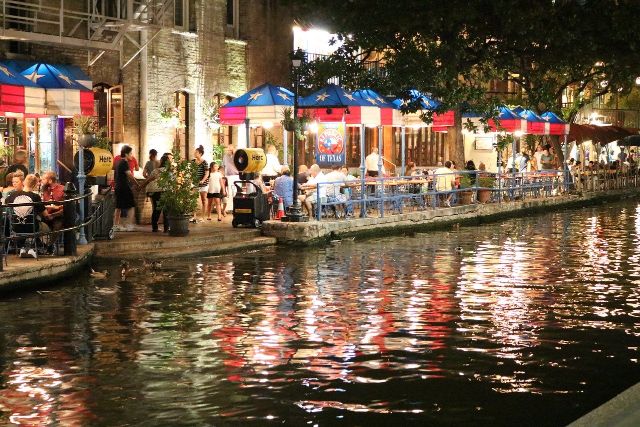 The best kid-friendly BBQ dish is probably smoked sausage. If your child has a sensitive stomach or doesn’t like spicy or zesty food, ask for no sauce or the sauce on the side.

For Tex-Mex, try a bean and cheese taco (I like to refer to this as a Texas Grilled Cheese) or a quesadilla, which is cheese or meat and cheese sandwiched between two tortillas, grilled, cut into quarters and served with salsa, sour cream, or guacamole.

If you allow carbonated beverages as a treat, order your child a Big Red to go with their bean and cheese taco. It’s the classic Texas meal.

The easiest way to get around with kids in San Antonio, Texas 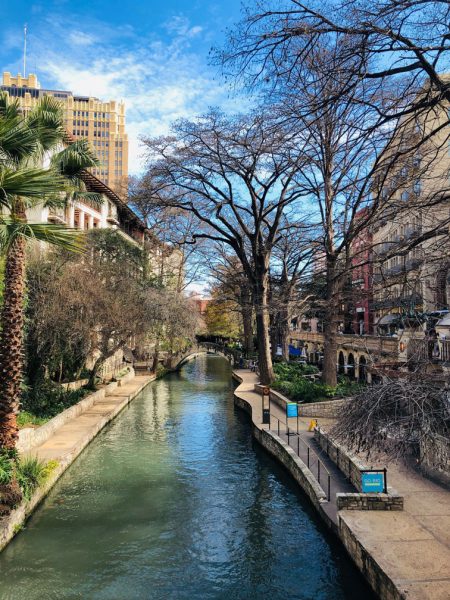 If you’re going to venture further out, such as Six Flags Fiesta Texas, SeaWorld San Antonio, Natural Bridge Caverns, Cascade Caverns, or to go shopping (Alamo Quarry and the outlet malls north of town are great) then you’re going to need a car. Ride share services, such as Uber and Lyft are alive and well in San Antonio.

If you’re going to be doing a lot of driving, you may want to consider renting a car. Free parking at hotels is something of a rare bird in downtown San Antonio or The Pearl, so if you’re going to do one trip that is outside the scope of what’s walkable, a rental car might not be the most cost effective option.

The best family-friendly neighborhood to stay in San Antonio, Texas

I’ve mentioned The Riverwalk and The Pearl, both of which are close to all the action. There are also hotels near the San Antonio Airport, which is about a 15-minute drive to downtown, depending on traffic…and traffic is a thing in San Antonio. If you’re going to be doing a lot of driving, definitely scope out the traffic situation on Google Maps or use an app like Waze. 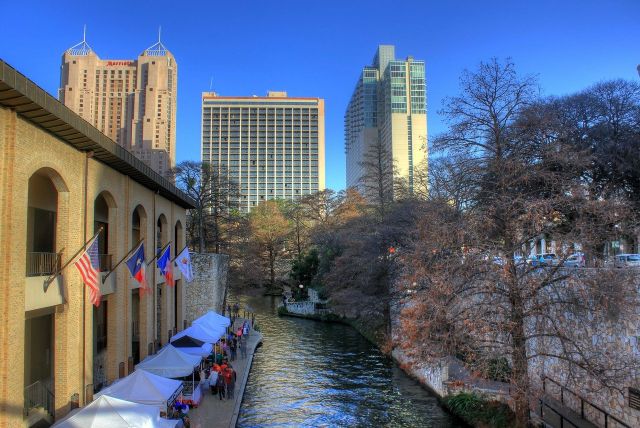 These options will be 30-60 minutes to downtown, depending on traffic. 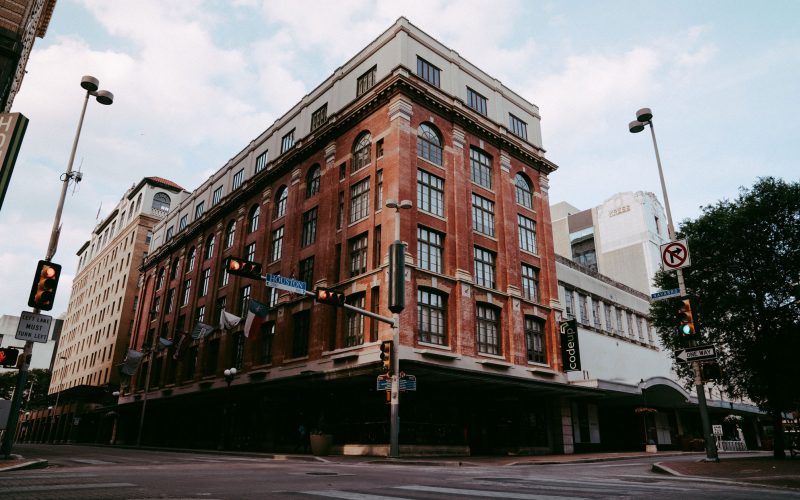 There are a lot of great rentals downtown but a lot of San Antonio is undergoing a gentrification process, which means beautifully restored houses may be located in neighborhoods you might not feel safe walking about in during the evening. My best advice is to read reviews of other people who have stayed in a house you’re looking at and scan the entire area on Google Maps. San Antonio is a family-friendly city full of wonderful family-oriented people. That said, some neighborhoods are not so great.

Best things to do in San Antonio, Texas with kids

San Antonio Missions: The SA Missions are a National Park and a UNESCO World Heritage Site

Museums: We mentioned the Witte and Doseum. There’s also the San Antonio Art Museum, The Macknay Art Museum, The Briscoe Western Art Museum and the Institute of Texan Culture, just to name a few.

The Historic Pearl: This was once a brewery – Pearl was some truly terrible beer, so I’m told – but the brewery and grounds have been repurposed into upscale dining, shopping and outdoor activity space. The Hotel Emma is built around the old brewery and it is a fun place to visit or eat. San Antonio City Parks: San Antonio has some lovely public spaces. My favorites are Phil Hardberger Park and Bamburger Nature Park, but there are lots of others to explore, depending on where you may be staying. If you’re doing a home stay or vacation rental, Google the city park nearest to you. Jill Robbins is a San Antonio based freelance writer and blogger who is always planning her next adventure and writing about it on her website: Ripped Jeans and Bifocals. She’s been featured by Disney, The Washington Post, and other publications. She believes in experiences over stuff and loves showing parents that their traveling days are not over just because kids come along. One of her latest blog posts is about Things to do in San Angelo – a small town in West Texas that’s about a 3.5 hour drive from San Antonio.. You can keep up with Jill’s adventure at home and beyond on Facebook and Instagram.

What I... Karen from Mommy in Cape Town