Last week Wednesday I was fortunate enough to be invited to take part in the very first Blog Olympics organised by Mr Price Sport and hosted in Durban at the iconic Moses Mabhida stadium!

The day saw 24 bloggers from around SA take part in a variety of fun sporting events – upon arrival I was very happy to discover that it wasn’t going to be too “sporty” and that even I (who had to add “sport” as a category on my blog for this first post) was able to participate!

All eight events that made up the Blog Olympics used items from the Promaster range, currently available in Mr Price Sport stores. With names such as Afrisack, Waboba and  Zooper you knew it was bound to be a day full of fun!

After kitting up in our Maxed gear from Mr Price Sport in the team changing rooms of the stadium we kickstarted the action with some hula hooping in the stadium… The hula hoop (R49.99) has been around for many years and in case you didn’t know the objective is to keep it around your hips without it falling to the ground. Obviously I didn’t get that memo and lasted all of 2 seconds! But there were 3 “talented” hula hoopers amongst us who managed to last close to 5 mins! Yikes! Joburg took an early lead with 1st (Kate Nokwe) and 3rd (Nonhle Ndala) place while my team mate Sboshmafu did well to hang onto 2nd place. 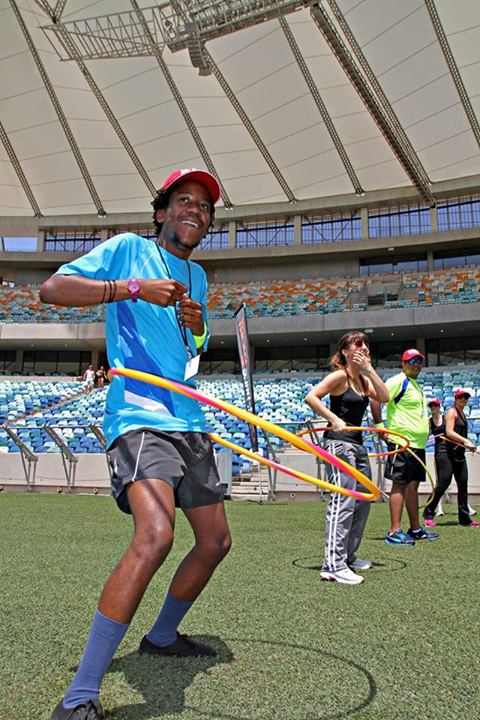 Sandile Nene – We blog for love We all headed off to the next event station… Ring Toss. This unique little rubber ring (R29.99) is not just a dog toy as many think. Another way to use this ring is in a game called Tenniquot or ring tennis. It is an official game, which has been rejuvenated by many in South Africa, India and the UK and is played very similarly to tennis. Opponents have to get the ring over a net, and try hit the floor on the other side, the other opponent needs to catch the ring before it hits the ground and throw it back over the net also trying to hit the ground on the other side. We used it in the traditional way and again Joburg managed to surge ahead with Uno from 10and5 proving to be the “biggest tosser” in this event. 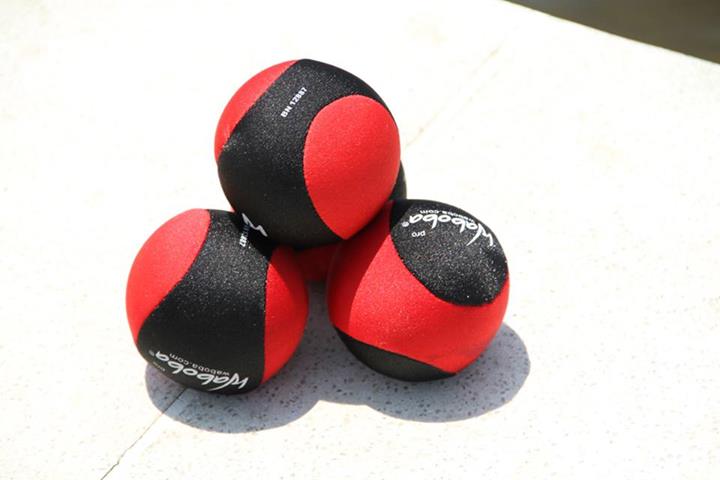 Next on the programme were these little guys…. known as Waboba balls (R99.99). These are powerful bouncing balls that don’t work as you would expect – instead they bounce and skim their way across water! This clever little ball is nothing more than silicone wrapped in neoprene. The silicone rebounds off the water allowing the Waboba ball to bounce across the surface as if it were a skipping stone. The ball will never become water logged and guarantees hours of fun. This event took place at the stepped fountain near the Peoples Park and the aim was to get your Waboba to bounce in as many levels of the fountain as possible. Lots of fun – and a huge hit with my kids on my return home! This looks set to be one of their fave games this summer. Abi Ray – East Coast Radio
After a break for lunch it was on to the next 5 events. First up brightly coloured bouncy balls that we had to bounce in the demarcated area and get over a series of ropes. The super bounce ball (R99.99) is filled with a special gas that allows the ball to bounce higher than conventional plastic air filled balls. Pumped up to the correct pressure, the super bounce ball can be bounced or hit meters into the air. So far, so good for the Cape Town team – we weren’t soaring ahead on the score board but holding our own with consistent performances by all the team members. Slow and steady seemed to be our tactic but we had no idea if it was working and where we stood in the points table! Next up was the the Afrisack (R49.99) … a new take on the traditional hacky sack, a game many school boys played for hours but something I have never set foot on! Fortunately we had quite a few football fanatics with fancy footword on our team (I’m looking at you Dylan (Mr Cape Town) & Ryan (The Pundits) We had to keep the bean filled bag in the air as long as possible without using our hands. The most “hits” in a row… miraculously I managed to get my foot on the bag a few times and as a team we came out tops with an impressive 18 hits in one go! Celebrating our Afrisak victory!
Then it was onto darts with a difference…. large foam darts, known as Zooper ball (R59.99), that we had to hurl through the air at the dartboard.

The Zooper ball is ideally used for kids to improve their cricket skill. The ball is able to bounce, skip and fly through the air like a rocket. This teaches kids quicker reaction time when skipping, accuracy when throwing and hand eye coordination when catching the Zooper ball. Being able to either whip it or throw it, allows for more fun to be had.

This was a great game and definitely one I’m keen to get for our home. We have a family tradition of playing a game on Christmas Day after lunch – each year I buy a new one  – so this looks like a good option, something every member of the family will enjoy, and maybe just a bit safer for the kids than the real deal 😉 Our final individual Blog Olympics event was the Frisbee disc throw – each of us hoping to claim “The Biggest Tosser” title! The coaster Frisbee (R99.99) is designed for extra distance and easy throwing. Here our tosser Tyrone claimed top honours for The Cape with a throw of 140m! And then it was time for the obstacle course relay – 4 members from each team faced off through a series of ropes, hoops, slides and speed. It proved to be a very exciting event with us falling behind in the first leg but picking up near the end and ultimately finishing in first! Even if the only part I played was team selector and head cheerleader for this event – I feel they are both vital roles  😉 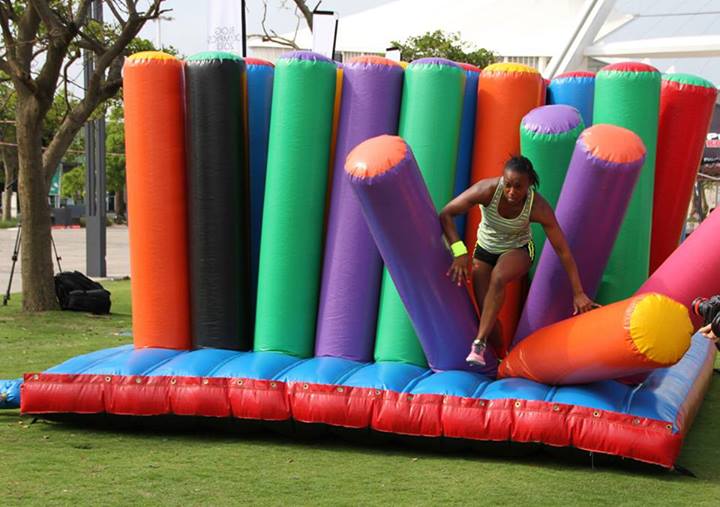 While the points were tallied we were invited to take a trip in the Sky Car to the top of the Moses Mabidha stadium and pushing through a fear of heights was well worth it! 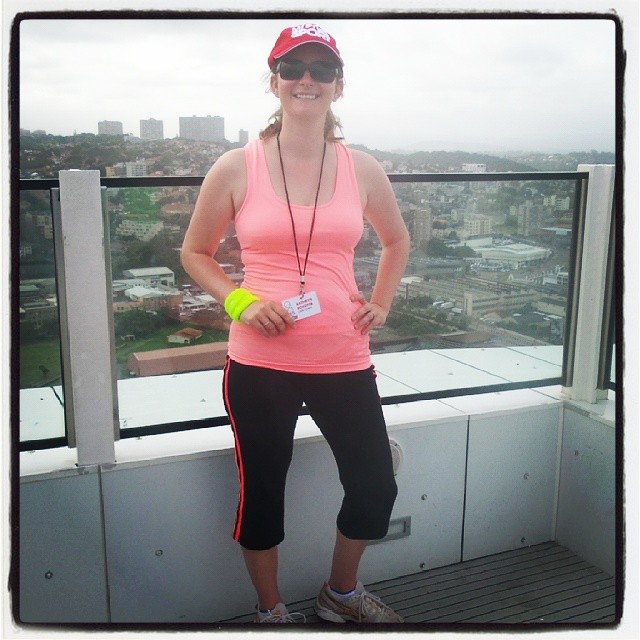 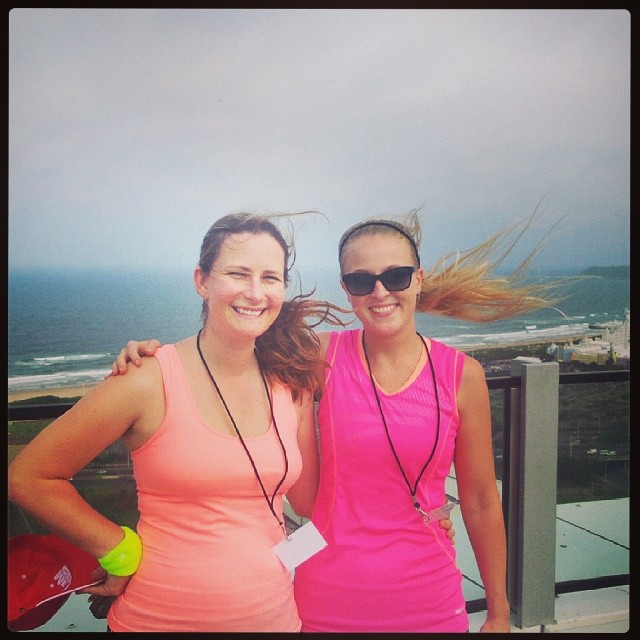 And finally the awards ceremony…. with the sweet taste of victory being awarded to Team Cape Town!! YEAH! What an amazing way to end the first ever Blog Olympics event. 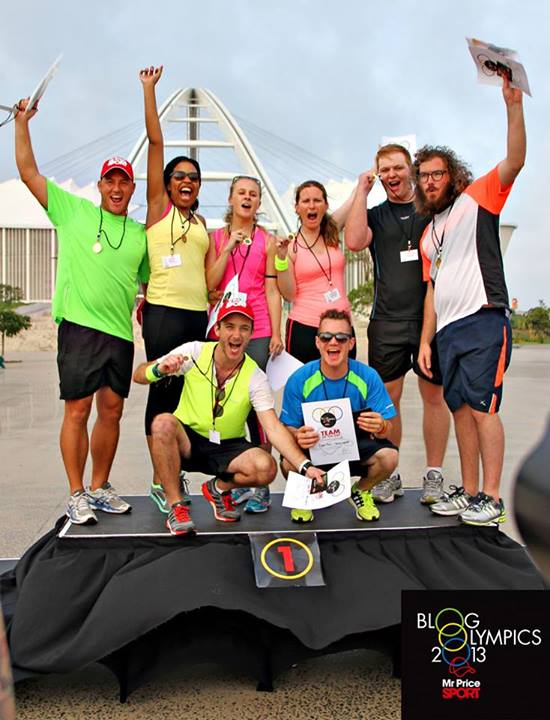 And although I can’t claim to have won any event I tried my best to keep my team in the points by contributing at least a few at each event so I felt truly deserving of my very own “Gold” medal 😉 And celebrated in style with some bubbles overlooking the sea from my room at the stunning SunCoast Tsogo Sun!

Thank you to Mr Price Sport and the organizers and other sponsors for a day full of awesomeness! I had a blast and loved getting to know my teammates (all mentioned above) as well as some of the other bloggers that I follow who are based in Jhb and Durban. It’s always lovely getting to meet the person behind the blog and I enjoyed meeting Tanya Kovarsky from Rattle & Mum (who wrote a great post about the event here), Nadia van der Mescht from NadiavdMescht, Dimi Ingle from Style Scoop and Chia from The Socialite and Fathima from Happiness is It really was the most fun I’ve had for a while and just goes to show that ANYONE can be sporty, even me 😉

Shop the world with MasterCard

What I... Chantelle from Not another Poppie