These June/July holidays my better half had it in her head to visit the Drakensberg. Me, not so much. The idea of trawling my 8-year old sedan with more than 240 000km on the clock just seemed a tad risky. So arriving home on the Friday afternoon before our trip, you can imagine my surprise to find the all new Ford Kuga parked in our drive! Apparently Ford were loaning us the tidy, sleek-lined Ford Kuga 2.0 TDCi Titanium Powershift 6AT AWD (a mouth full, I know!) for the duration of our holiday. Really cool! 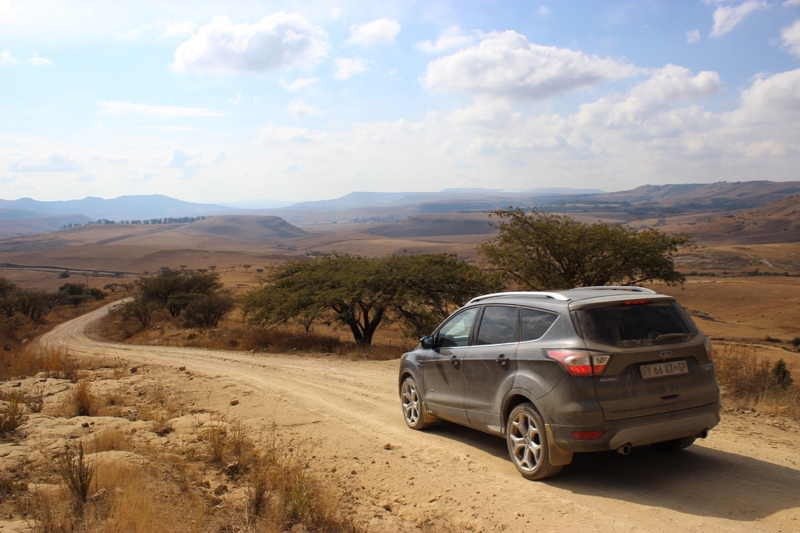 So with the bad publicity Kuga had endured recently, you must be wondering what it was like… and if we arrived home in one piece. We did, along with a few more of my thoughts about the car.

At the outset the first thing that struck me was that it was a super quiet ride.

The open road for me means enjoying a relatively relaxed drive and that requires the use of cruise control. This convenient steering wheel mounted feature had some great AI which reads the distance of the car in front of you and applies the brakes automatically when you are too close. At first it felt a bit unnerving, but as the drive progressed I really appreciated this feature more and more. 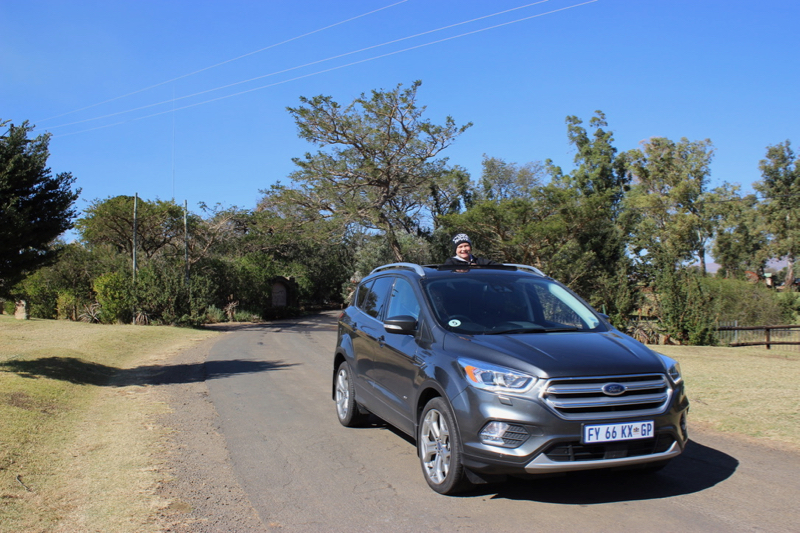 The kids seemed taken by the sunroof… their favourite feature of this Ford Kuga! I didn’t really realise the awesomeness of the sunroof until the whole cover peeled back to reveal a panoramic view of the blue sky above us. The highlight for them was opening the sunroof all the way, letting the snow blow in the car along with the cold 1 degree air! It was their first experience of snow and a pretty memorable one at that!

Another cool feature for the kids was the space in back seats and the awesome fold-down trays attached to the back of the front seats, which allowed them to draw or to rest their ipad on while watching a series. Later on this simple feature came in handy when they were snacking, eating over the tray while their drinks rested in the drinks hole. A very handy feature.

Another family-friendly feature are the leather seats. Although they may be a little colder initially when compared to upholstery, they are much harder wearing and easier to clean than material seats (key when you are travelling with kids!)

Our family loved the music system which was brilliant. Any road-trip is just not complete without some music, and this is a very important feature in our family so the 9 Sony speakers dotted over the interior of this vehicle presented us with crisp, clear tunes to make the drive even more pleasant and it was a bonus to be able to sync your phone to play automatically via bluetooth – no cable or wires to get tangled in! At 12:30 am on the way back the kids were wide awake and the ‘silliness’ kicked in hard when we played Bohemian Rhapsody by Queen really loudly!

Arriving at our destination I was more than relieved. Needless to say that had my sedan made it the approximately 1000km to the Drakensberg it might have still been there today, lodged in one of the potholes or fallen to pieces on one of the dust roads.

The Kuga, however, sauntered over the dust roads with ease. The AWD made it a very comfortable drive and we all felt safe and secure in the vehicle. As the driver, I never had the feeling of being out of control, or weary of the tyres skidding on the surface. 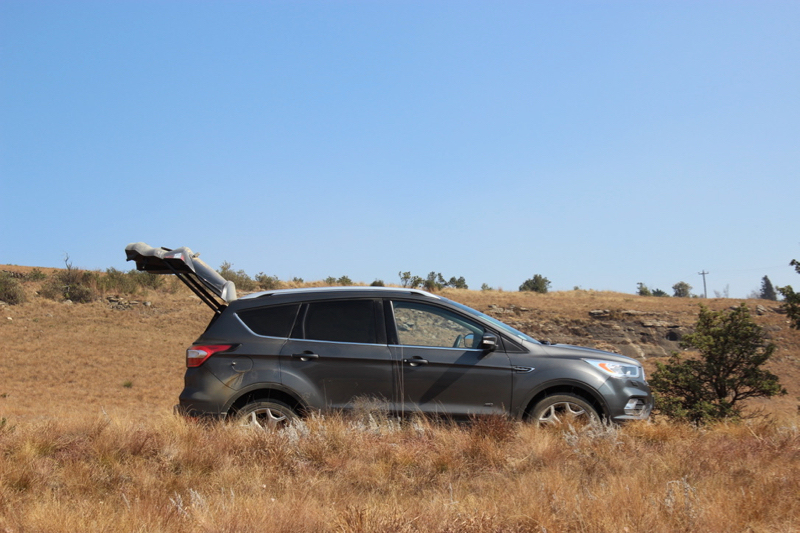 Being a two week road trip we did have quite a fair amount of luggage with us so thank goodness for the rather spacious boot. During our trip I was to stumble across a rather nifty boot feature. Kathryn needed something out of the boot one evening and I was a little reluctant to go outside and she had forgotten the car key, so I merely double clicked the boot button on the keys and the boot opened! Then, when she was done, I decided to double click again and see what happened, the boot closed itself from where I was sitting inside… what a pleasure! This became an entertaining feature for the kids to use when they needed something out the boot. Honestly, it’s a small, seemingly unnecessary feature, but it is practical and very handy for those that cannot reach the boot to shut it manually (like the kids!)

Being a SUV, the Ford Kuga is naturally larger than my sedan and this presented me with the challenge of parking. I found the front console touch screen was a super helpful feature in navigating tight parking spots, giving me a very clear view of the rear space behind the car and, with the sensors, warning me when I was too close to an object.

The dash is rather heavy with lighting and information which I found to be a bit on the busy side for me personally. It was also less sleek than I would have liked, but I really enjoyed the setup of the centre console with 2 USB ports tucked under the armrest, and a spacious under armrest storage area too.

The centre console had plenty of space for drinks and general storage which lead up to a touch screen with blue tooth, Ford Sync and Voice control which made setting up music, connecting my phone and navigation easy. It would have been nice to have adjustable height feature on the arm rest as I am used to having both arms at the same level while controlling the wheel, but that’s a small issue in the grand scheme of things. Although it did take a few extra clicks here and there, adjusting the seat and the steering wheel was a breeze and I was able to get them both to suit me perfectly.

In a slightly OCD way I watch my cars fuel consumption, and this time it was no different. I was impressed. Driving the 1 000km, obeying speed limits all the way, we averaged 7.1L/100km and then, while doing our short trips in and around the Drakensberg, it went up only slightly to 7.2L/100km, which was probably kept to a minimum with the ‘City Stop’ feature, where the engine turns off when you come to a stop street standstill. On average through, consumption fell to 7.1L/100km for the entire trip. Pretty good considering this is a 2.0L Diesel, with 400Nm Torque and a Max Power of 132kW.

Another big plus in my books is that when I needed the power to safely overtake, it was there. The N1 & N3 are jammed with heavy 18-wheel trucks, so it was helpful to feel really confident on the road and know I had the power to safely, but quickly, overtake when necessary.

Another handy feature I noticed was the side mirrors that had a little orange light which lit up when there was someone in your blind spot. Throughout my 20-odd years of driving I often think to myself that I really need to teach my kids to check their blind spots carefully before switching lanes, or overtaking, so this was a handy piece of technical advancement. Did I mention that they automatically fold in when you lock the car?

Overall, this was a thoroughly fun drive. A good looking, yet understated vehicle, with all the trimmings, some obvious and some not (like the 9 airbags), I felt safe and comfortable and, with the price of petrol seemingly not having a ceiling, I appreciated the fact that the Ford Kuga was economical without sacrificing on the necessary power.

It was Ford fun!

What I... Sharon from Supershazzer