After two lovely days spent enjoying the Africa on Foot camp it was time for our transfer with Enoch to nDzuti Safari Camp – another lodge located about an hour away but also in the Klaserie Private Nature Reserve bordering the Kruger National Park.

Upon arriving at nDzuti (“Place in the Shade”) we were welcomed warmly by Bruce and Judy Meeser, the couple who run the camp, (and who have spent the past 30 years living and working in the bush!) And we were introduced to their daughter Sabre and her boyfriend, Justin, who were to be our rangers for the first night – and immediately it felt like we were visiting a family of friends!

The nDuzti Safari Camp has a different feel to our previous lodgings, but one that we felt quite a home in. The large thatched “Out of Africa” style homestead has a central communal lounge and dining area with 4 double bedrooms leading off from it with generous en-suite bathrooms and large windows looking out onto the bush beyond. 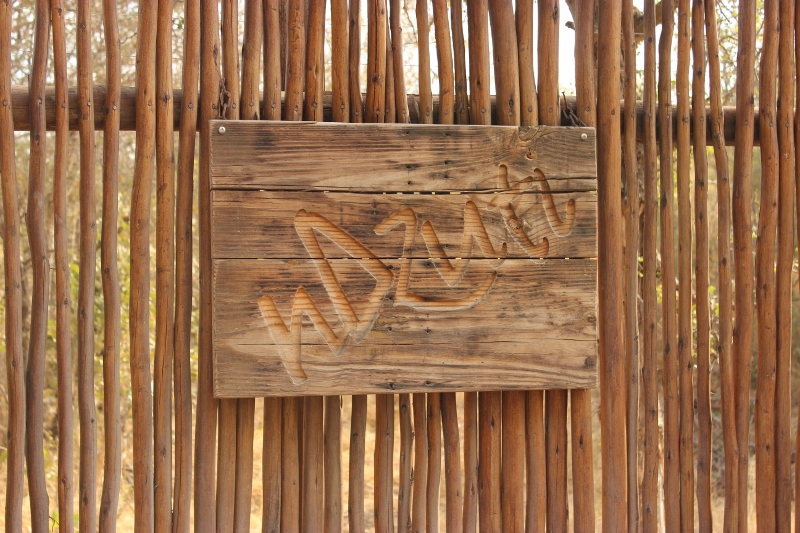 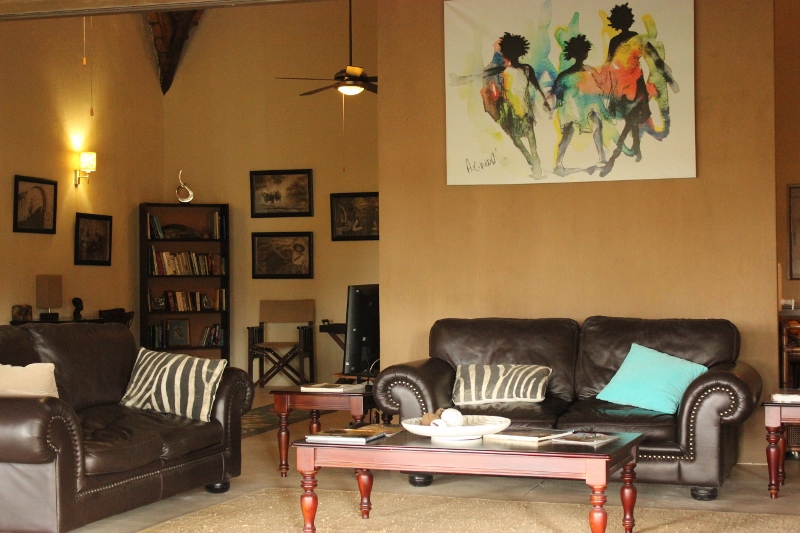 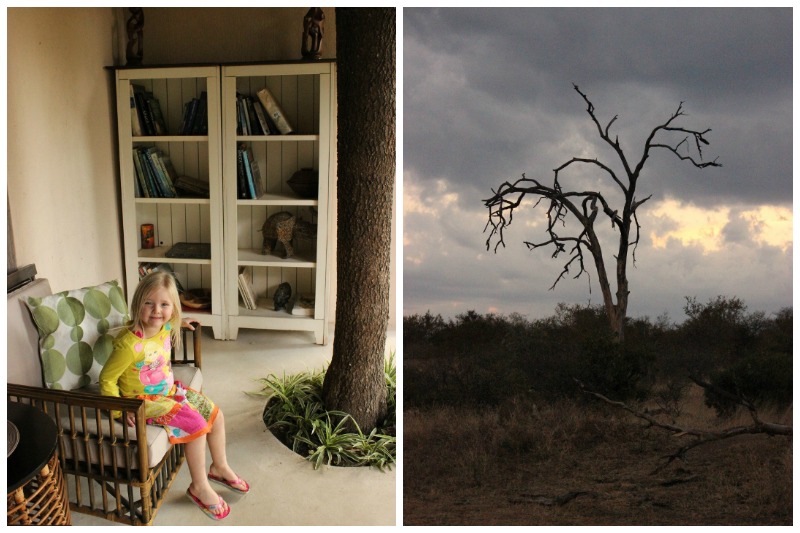 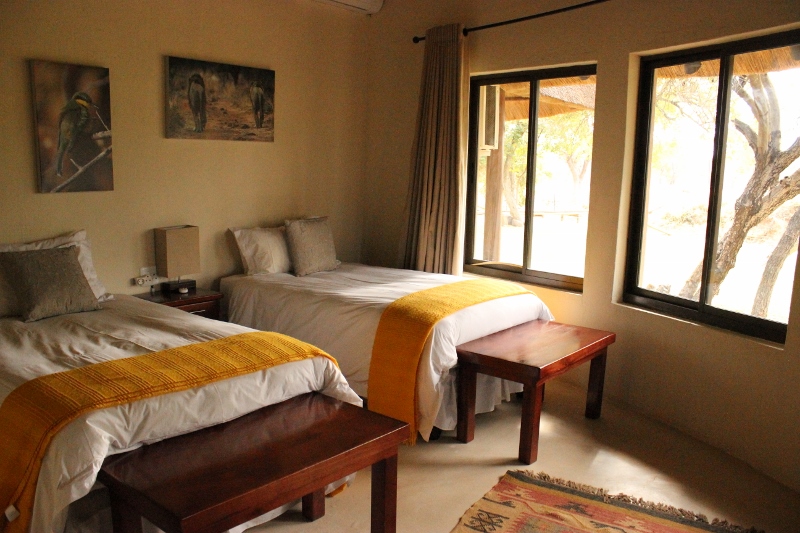 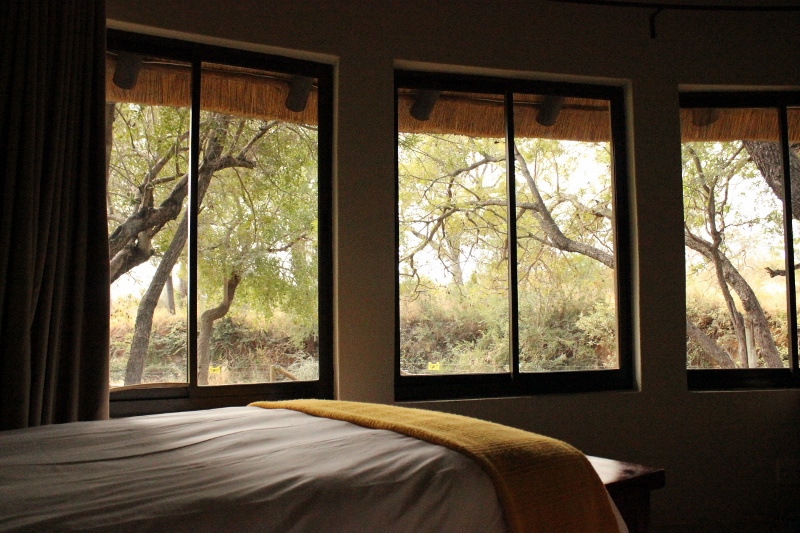 Surrounding the house are lovely lush lawns and plenty of trees to provide respite from the African sun and  shelter to a variety of birds. A short path leads to a large deck and patio area which forms the hub of activity – including a fire pit, braai area, boma, swimming pool with sun loungers and, if weather permits, a dining table where all the meals are served – day and night! 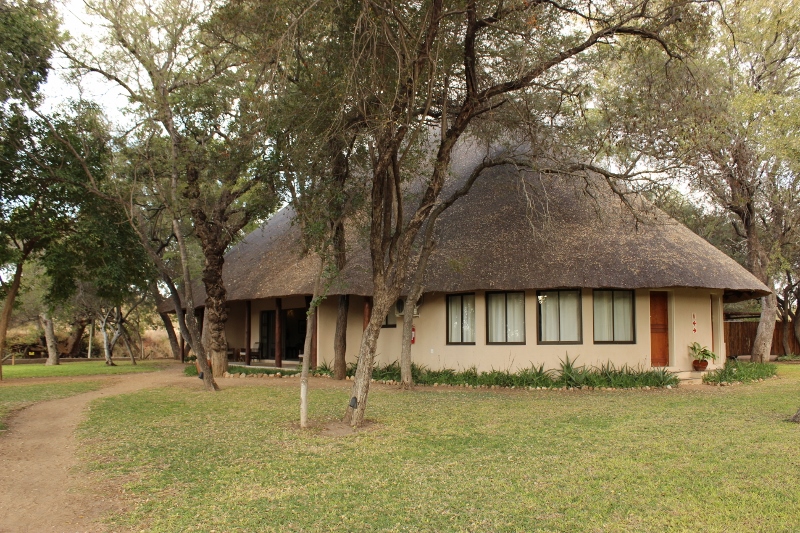 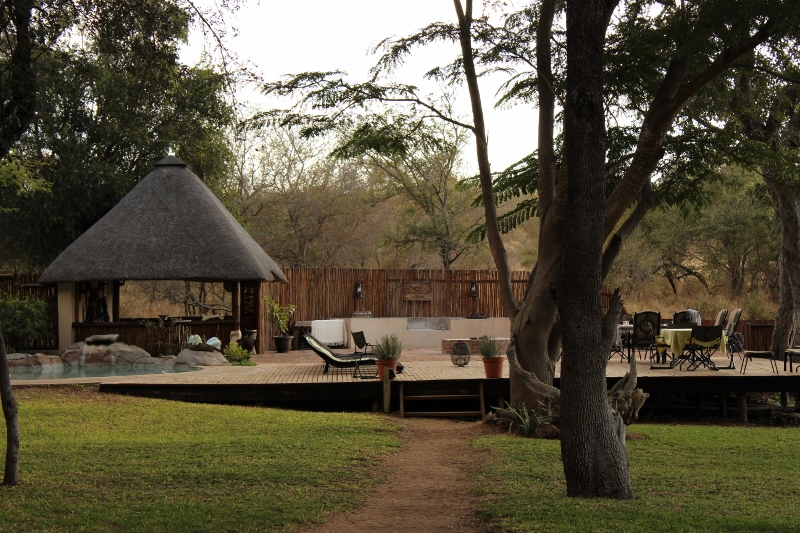 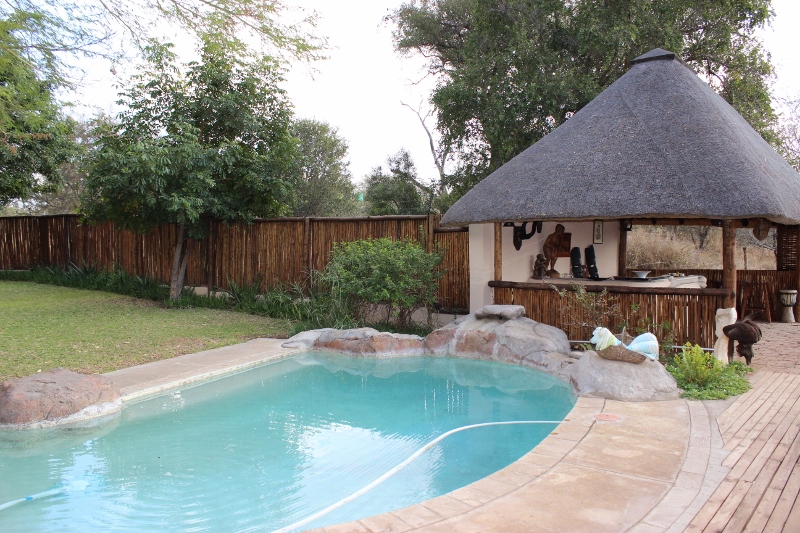 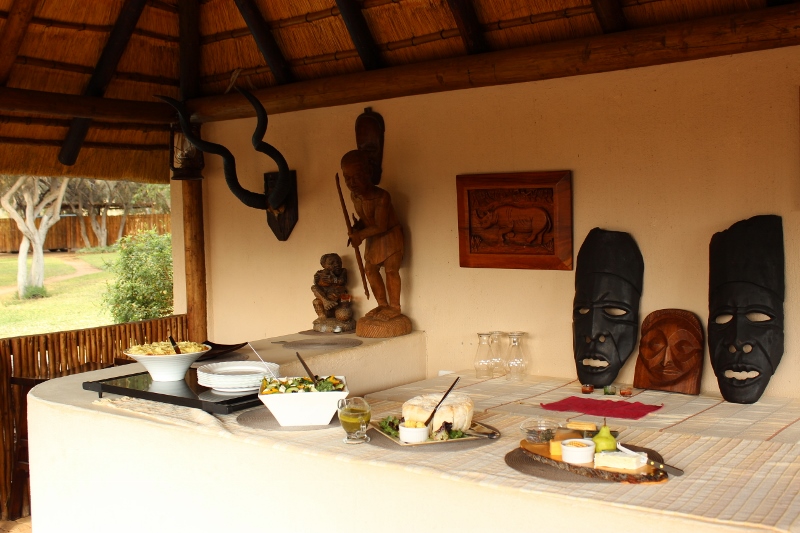 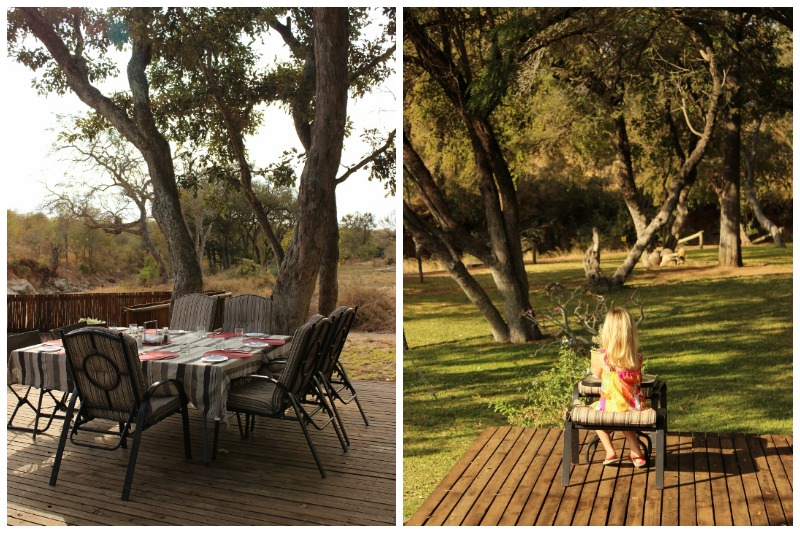 Just a few meters in front of the deck is a dry river bed (although it’s been known to flood occasionally) and beyond that, a little watering hole which attracts a lot of animal activity throughout the day. (More on that later!) 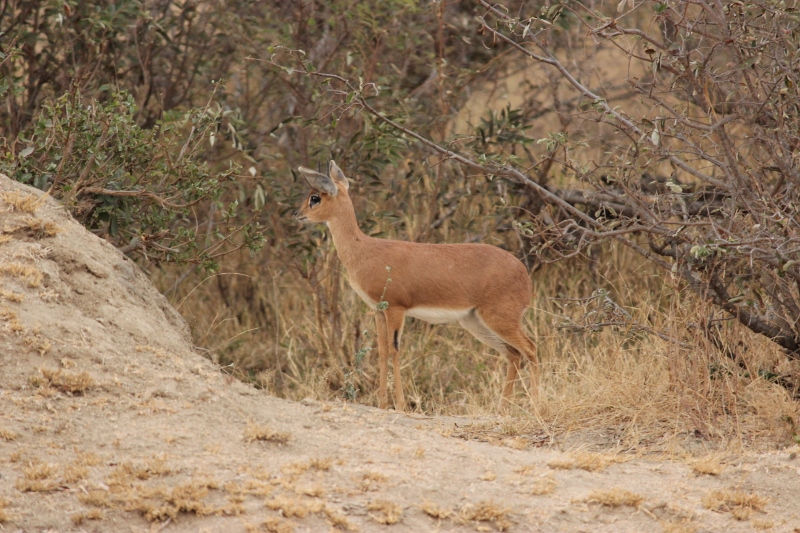 After the journey our kids were only too happy to jump out the safari vehicle and stretch their legs with a run on the lawn. What is great about this particular camp is that it is fully fenced which meant that we were able to let them explore a bit on their own and they took full advantage of this!

After settling in to our very comfortable rooms it was time for lunch on the deck. As there are only 4 rooms the lodge feels really intimate and it was lovely spending our meal times chatting and getting to know the other guests – a couple from Italy – and our hosts.

After our meal it was time for our first game drive and as there had been a lion kill on a buffalo the previous night Sabre and Justin were eager to take us past the carcass at night fall to see what activity might be taking place, but first we headed out to chase down a leopard that had been seen stalking past the camp just after lunch! Unfortunately these animals are very evasive and hard to find, so I didn’t get my long-awaited leopard sighting yet again!

At nDzuti there are no other lodges in the same area which means that there is much less activity on the radio during the game drives – this can mean fewer animal sightings, but what it does mean is that the experience is more authentic, less rushed and more considerate of the animals, bush and birdlife. Plus when you do have a sighting it is almost always your own exclusive experience!

As we headed out into the crisp early evening air we were told by Bruce of an amazing sighting he had just seen down on the banks of the Klaserie River not far from the lodge – a herd of almost 600 buffalo coming down to drink – something he himself had very rarely witnessed. Off we raced through the bush to make sure we didn’t miss the opportunity.

As we got closer we slowed down so as not to disturb the herd and then inched our way very slowly up the hill, until we rounded a corner and there below us, in front of us and surrounding us was the largest herd of animals I’ve ever seen – it was like a mini migration! Two or three different herds had all converged on the river at the same time which explained the sheer number of beasts.

We slowly made our way even closer into their midst, their eyes watching our every move and their breathing getting louder with a few “warning” puffs coming our way! The thought going through my mind was that this was our ranger’s “most dangerous animal” when I had asked previously – due to the fact that once they go for you they don’t back down!

We watched a baby buffalo drinking his mother’s milk as she tried to run away from our approaching vehicle – calf still attached to her! Then we quietly passed through the buffalo herd – some even close enough to touch… 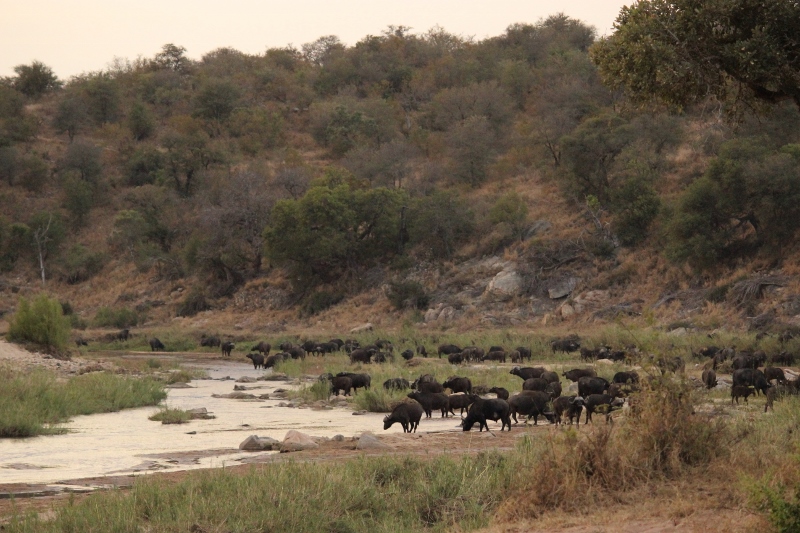 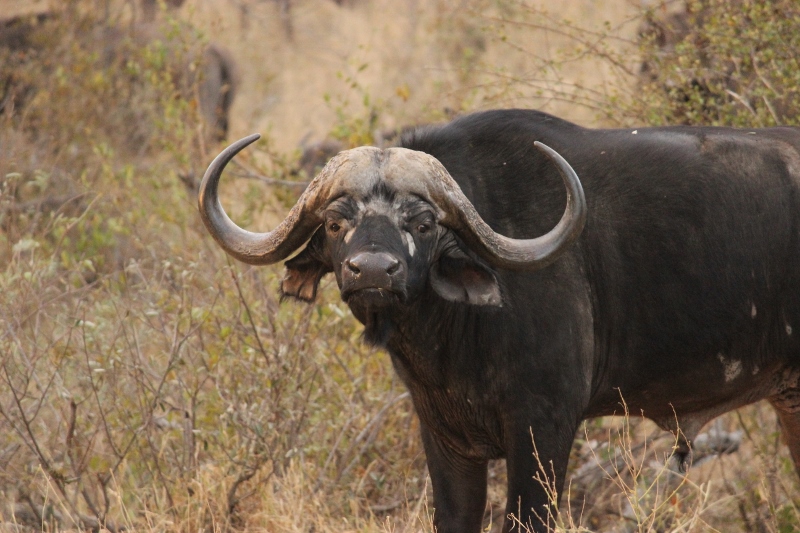 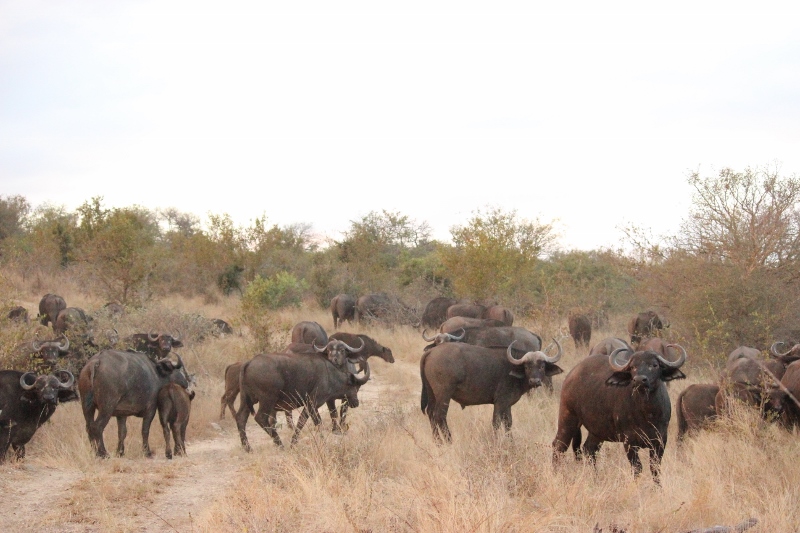 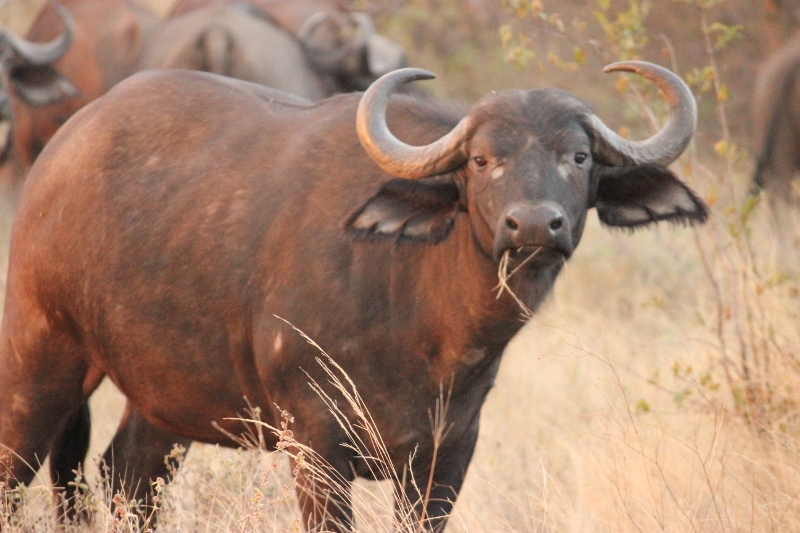 After this once-in-lifetime experience we headed off to the top of the hill to take in the majestic sunset taking place over the bush and the Klaserie River below – a view that cannot be matched! It was a moment to soak up in silence – one that makes you realise how small your problems are in the world, and how awe-inspiring nature is! A true African sunset I will not soon forget… Then it was time to enjoy our sundowner drinks at a nearby watering hole! Well, what we discovered after we got there was that it was in fact the an animal “toilet” otherwise known as a “dung midden”!

“Dung Midden” – piles of dung that mammals periodically return to and build up. They are used as a form of territorial marker and used by a range of animals.

Sabre kindly shared some of her knowledge as a child of the bush with my city kids about the midden and very well-worn scratching post located near a watering hold and on a very popular path through the bush! They were enthralled with all she had to say, and had loads of questions. She even offered to take my daughter for her very first “call of nature” in nature! As darkness descended we decided that it was probably safer back in the vehicle so off we headed to see if we might be lucky enough to spot the River Pride of Lions at their kill from the day before. We did manage to find them but unfortunately they had settled in for the night and were all sleeping soundly on the sand bank on the opposite side of the river to us. As we made our way towards the carcass Sabre kept shining her spotlight into the bush and suddenly we spotted two eyes in the darkness – hyena!

Yes, we stumbled across a hyena den – a few pups were obviously around as the adults got quite vocal – even doing their famous giggle for us! I had never seen hyena in real life before and I can tell you that they are both fascinating and frightening at the same time… Their weird body shape, freaky sounds and crazy eyes make for some scary stuff but at the same time I found it really amazing to see them up close.

We decided to move on from the den so as not to disturb them too much and headed on to the carcass – and when we got there we found there was hardly anything left. Within a day it had been reduced to a few bones. We killed the engine and sat in darkness to wait for some signs of life and sure enough out of the shadows crept two hyena who had obviously been busy scavenging.

As our eyes adjusted to the dark, one came right alongside the vehicle on my side – and I squished into the center of the vehicle a little more! Then we heard it – the crunching of bone! Those teeth and jaws are not for nothing – this was serious scavenging at it’s best. And then it was time to head back for a supper of our own! We were dropped off on the opposite river bank from the camp and made our way across the lantern-lit footbridge to tuck into a delicious braai, but not before we had warmed ourselves up next to the camp fire and spent a few minutes in silence absorbing all the awesome sightings we had just seen!

If you missed any of my other diary entries please click the links below to read more about our #KrugerforKids adventures in the low-risk malaria area of the Klaserie: How to Wear... Summer skirts