Family, Kids, Movie Reviews, My Reviews, Things to do with Kids
Jul 12, 2013
by Kathryn Rossiter
1
0shares

So the holidays are almost over but that doesn’t mean that the fun has to stop!! Why not make the last weekend of the school holidays one to remember with a trip to the movies? My kids have only been to a handful of “big screen” movies and always find the experience a memorable one.

We recently went to see 2 of the kids movies out at the moment…. Monsters University and Despicable Me 2. I thought I’d share a few thoughts about them here so you know which would be better suited to your kids!

We are big Pixar fans and our dvd collection contains all the titles including Monsters Inc. We were interested to see the prequel – Monsters University – to find out where Sulley and Mike first met! The story takes place at their alma mater and gives you some insight into what it takes to become a Monster. Initially the two were not friends but the plot follows their path towards a mutual respect and understanding. As the story is based around an American university even I found I missed out on some of the plot and I did think the setting was a bit advanced for kids who don’t understand what university is all about. That being said there were some great themes covered such as friendship, loyalty, perseverance, beating bullies, courage, self-acceptance and acceptance of others, which are all great talking points for afterwards. My son, aged 6, loved this movie and laughed out loud through most of the funny gags and toilet humour – all right up his alley. He has the maturity to not get too scared by the villain (The bat-like dean of the university) and was able to manage the scary parts (of which there are more than the first movie) unfortunately my daughter, aged 3, found the movie to be a bit overwhelming – not only the villain herself but all the other monsters (even the funny ones) seemed scary to her. We were sitting quite close to the screen which was a bit intense for her and also meant that the sound was too loud. She enjoyed it more when I moved to sit near the back of the cinema – on the steps! Afterwards she said it was scary and didn’t enjoy it so I would recommend that you do exercise your discretion with younger kids. 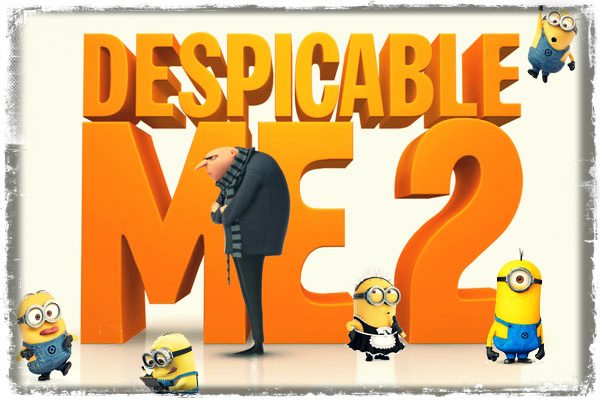 The first Despicable Me was a HUGE hit in our home with both my kids – “Spicable me” as they like to call it. I wasn’t convinced by the cover of the DVD but once we watched it as a family movie night option we all loved it. I was really excited to watch the second in this franchise. In this follow-up movie, the evil inventor, Gru, is no longer a villain, having saved his three adopted daughters Margo, Edith, and Agnes from Vector in the first film. However, because he can think like a villain, he is called on to save the world from the new villain on the block, Eduardo. We watched this movie in 3D which was great for those that could keep their glasses on! My daughter hates wearing the glasses which causes a few issues as she insists on watching the movie without them which I’m not keen on in case it ruins her eyes!! Anyway that issue aside we all loved this film and enjoyed plenty of laughs. We loved the new geeky character, Lucy, and of course, the Minions steal the show (even the “evil” purple ones!) It is probably a better choice for kids under 5 as the villain is not as scary and the cute kids are easier for your own kids to identify with. The biggest theme running through this movie is that of the importance of family which is featured in all it’s variants (a doting dad, adopted kids, step-mom, re-marriage etc) Other themes include, lots of humour, acceptance and hope.

I’m a big fan of entering competitions and I know many of my readers are too which is why I thought I would tell you about one that Ster-Kinekor are currently running until 31 July. Watch any one of their “8 Wonders of Ster-Kinekor” titles – the two mentioned above plus Epic in 3D, Spud 2 – The Madness Continues, White House, Man of Steel, The Lone Ranger and The Internship and SMS 31320 with “SK” + your ticket number + cinema name to instantly stand a chance of winning prizes – from popcorn vouchers and free movie tickets to digital cameras, Sony smart phones and Playstations.

To book for either of these movies or more info visit: www.sterkinekor.com or download the very handy SK App on your Nokia, Samsung Android, iPhone or Blackberry phone to book from your mobile.

How to Help - Feed the Hungry

Search this site
About the Author

Hi, I'm Kathryn. Thanks for visiting my lifestyle & travel blog which I've been writing daily for over 9 years!

I am a mom of 2 from Cape Town, South Africa and I blog to connect with the world and remind myself of who I am aside from someone’s mom - travel, style, family, decor, photography... inspiration!

Made with ♥ in Cape Town, South Africa with the help of Web2Web © 2010 - 2018 Kathryn Rossiter All Rights Reserved