One of my abiding memories of a previous visit to this part of Italy was an evening stroll that I took with my hosts along the promenade in a coastal town called Lerici (pronounced LEH-ree-chee).

This experience of wandering amid the jovial crowds of locals enjoying their evening ritual of connecting with friends and family, while savoring a gelato and watching the sun slowly sink on the Bay of Poets, stayed with me for years. When I knew we were heading back to Italy I knew this was a memory I wanted to replicate for my husband and kids!

Thanks to the long summer days of mid-June we were able to enjoy a morning excursion to Fivizzano, some down time back at Cisigliana and then a late afternoon jaunt to the coastal town of Lerici, an hour from our home base.

Lying on a stretch of coastline most widely referred to as the Bay of Poets due to mentions by Dante and frequent visits by poets such as Shelley, Byron and D.H. Lawrence seeking inspiration, Lerici is a town that was destined to be a destination. This pretty city is often called the Pearl of the Gulf and Lerici is indeed a gem.

With a sparkling bay, rocky cliffs, pastel painted houses and an imposing castle, it’s not hard to see why this little town is so popular with local holiday makers, but it is surprising to discover that it has not yet been overrun by international tourists who seem to head to nearby Cinque Terre instead. This makes the little town of Lerici an appealing choice as it holds all the same appeal as it’s neighbouring villages, but without the crowds. 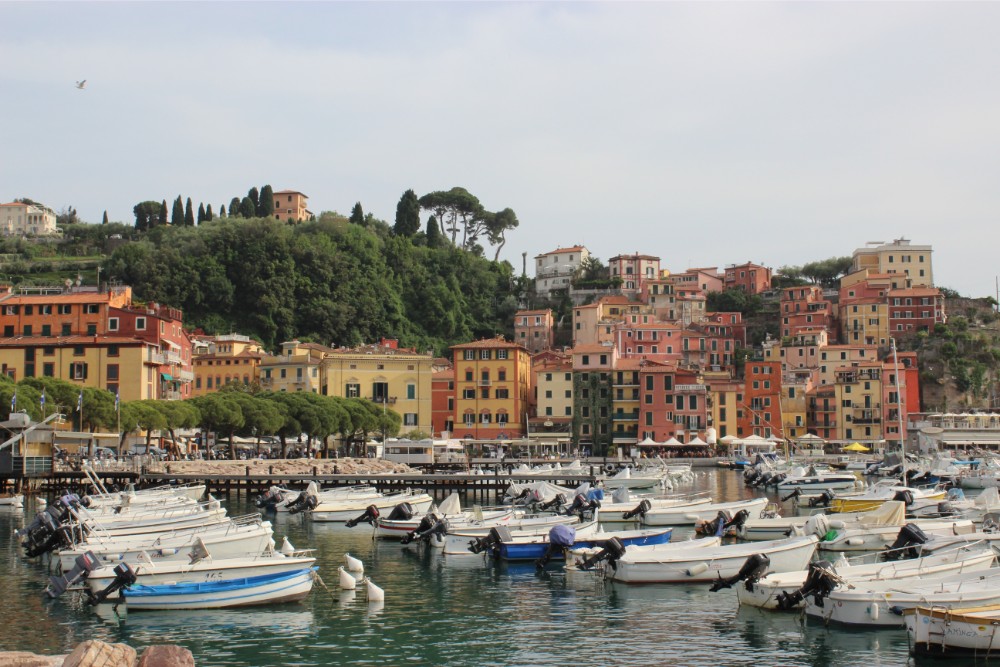 We arrived in Lerici at 5pm and managed to find a paid parking bay in a small parking area located opposite the beach. The roads in this area are a tricky one way system so this parking was pure gold.

We headed to the beach only to discover that you had to pay to enter if you were not a member! How odd for us South Africans where beach access is free for all (these days). Later I discovered that this beach, equidistant from San Terenzo and Lerici’s town centre, is Venere Azzurra. It offers bathing facilities and is one of the most frequented by La Spezia’s younger residents. Next to the beach is the multi-purpose Venere Azzurra complex, which boasts two swimming pools (one of which is Olympic size), and tennis, golf and archery facilities. 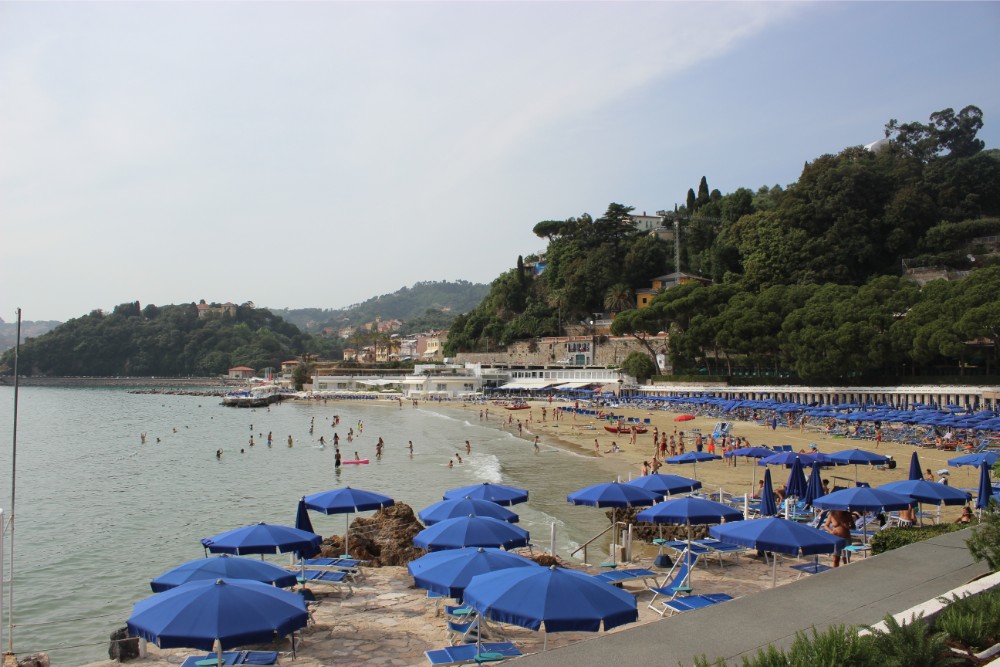 Fortunately we followed the locals example (which always a good idea when travelling) and realised that to get around this frustrating situation they all perch like large sunbathing sea lions on the enormous tracts of rock littering the coastline – and then dive off them for a swim. We found this a bit tricky to navigate initially, but with a bit of practice we were finally able to enjoy a swim in the sea… our first swim in the Mediterranean! At 6pm it was still 27C and the atmosphere was one of a lazy, relaxed holiday even though it was a mid-week afternoon! 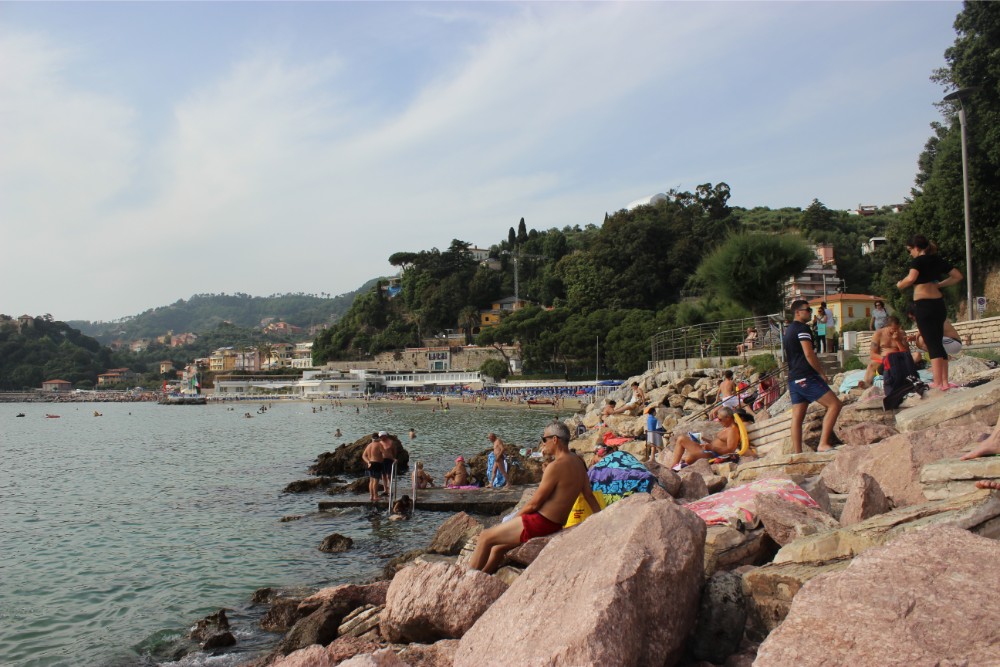 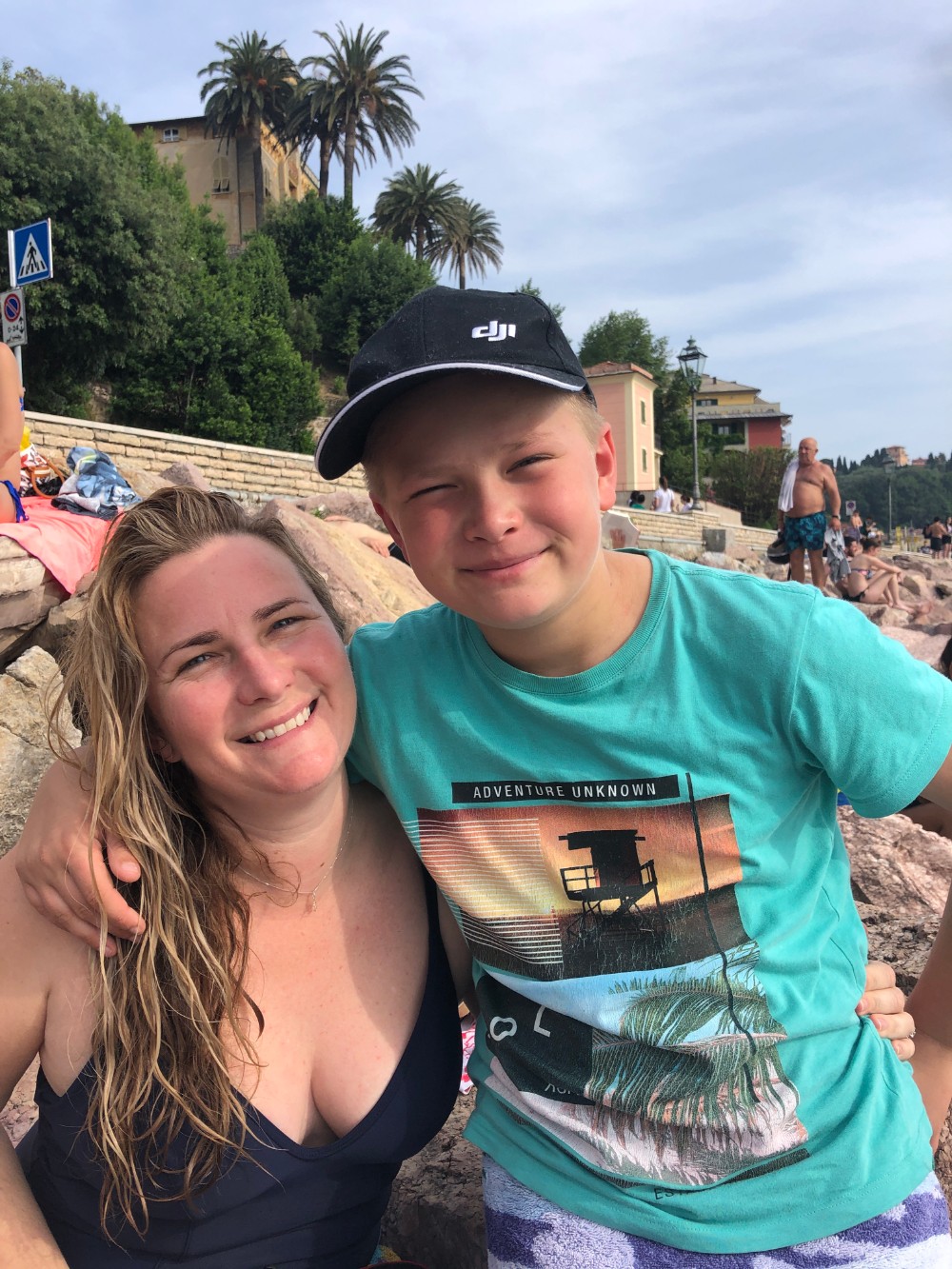 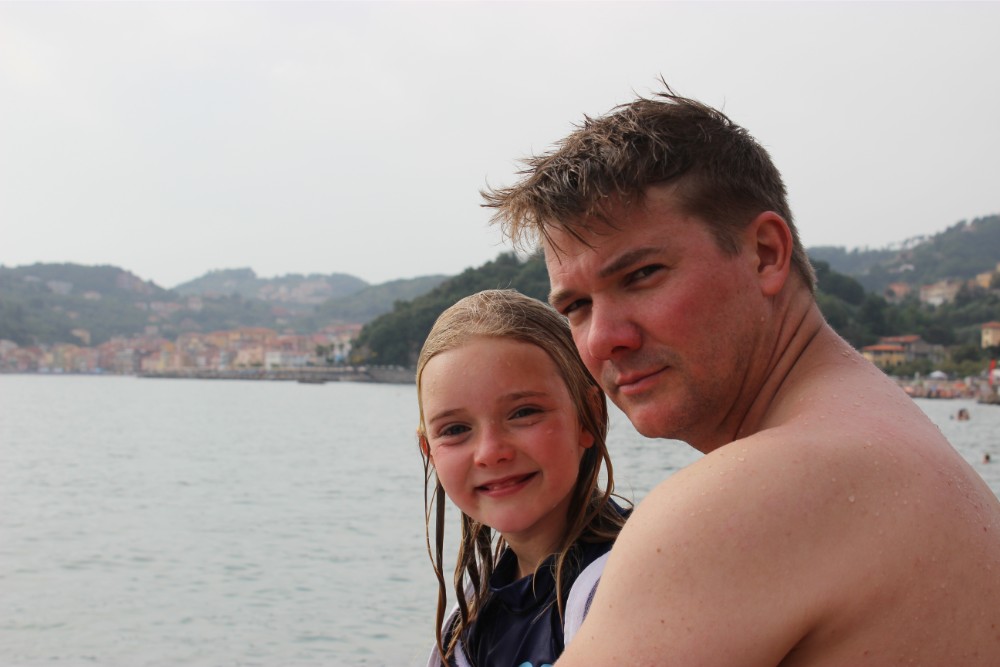 A leisurely long promenade, Lungomare Biaggini, runs long the water’s edge and this was my lasting memory of Lerici, so after our dip in the warm, salty Med we decided to join the locals in a little “passeggiata” of our own along the promenade to take in the views of the picturesque harbour filled with bobbing boats…. with a gelato in hand, of course! 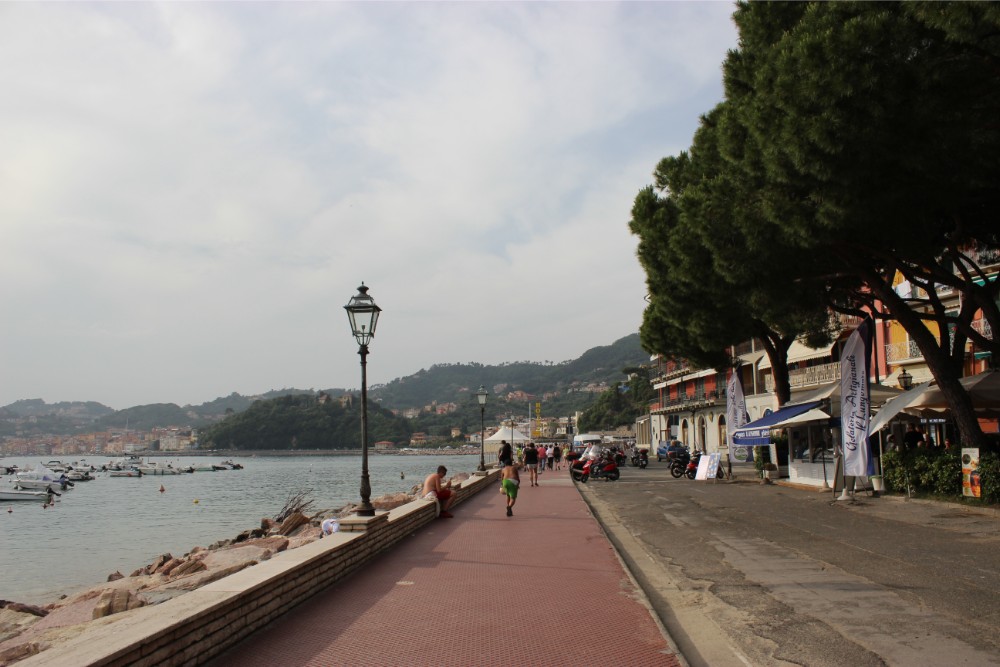 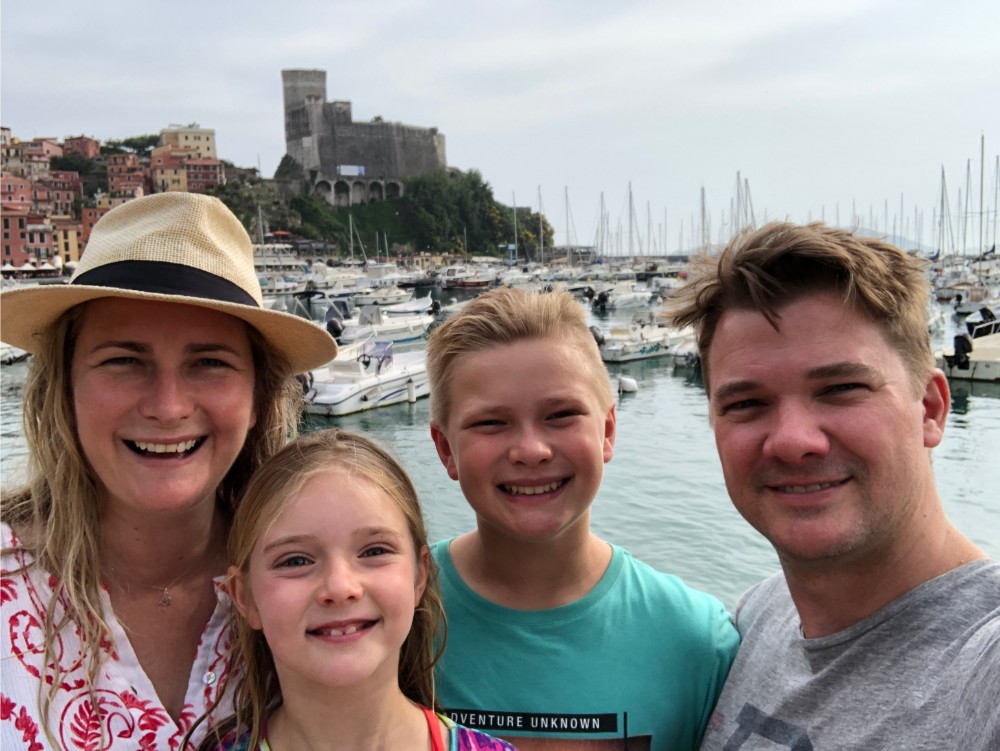 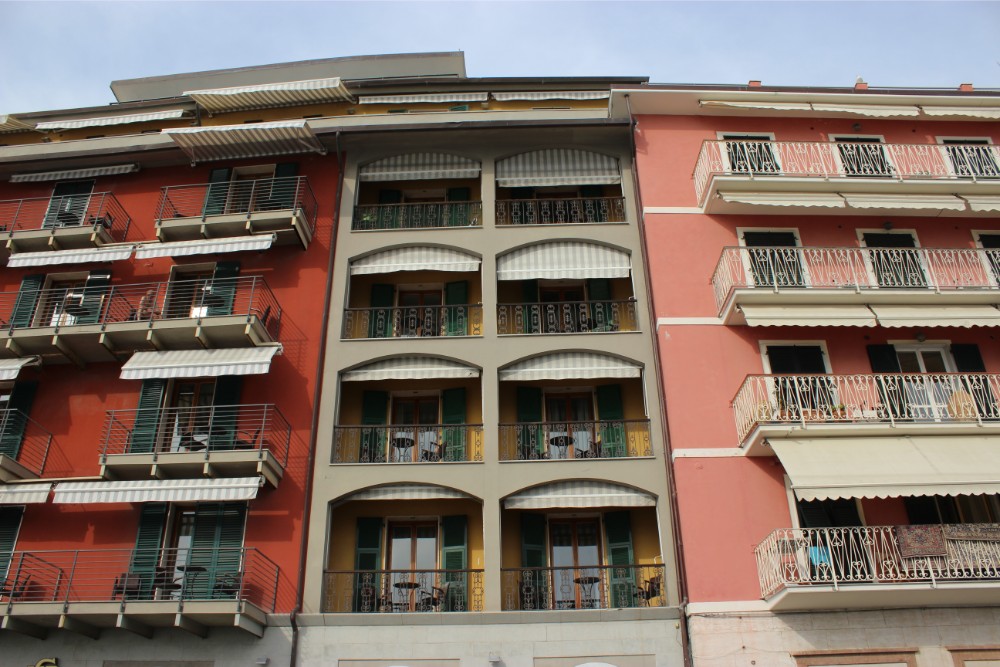 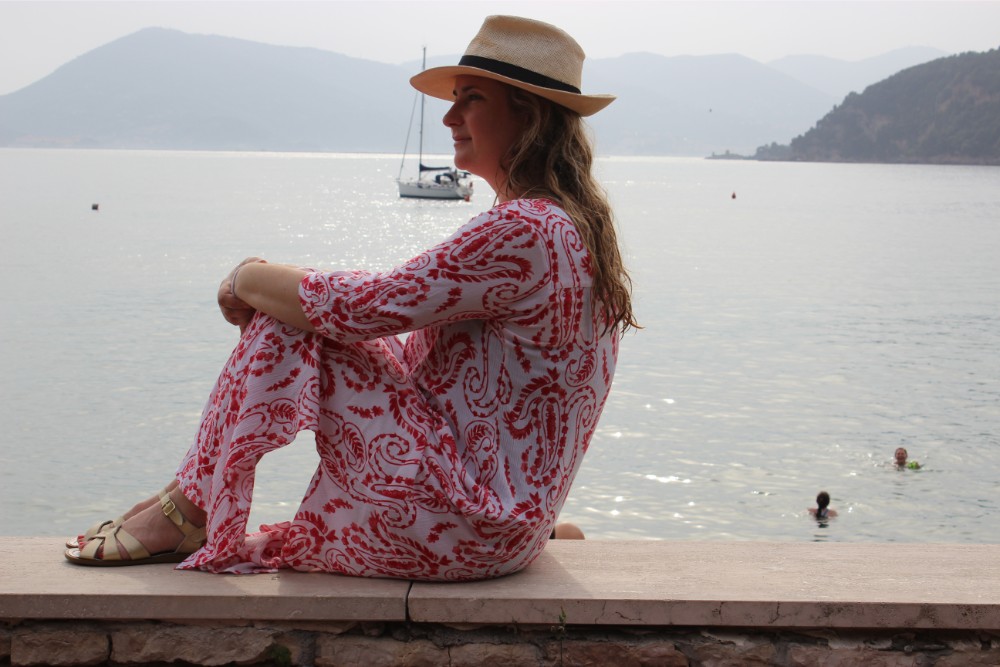 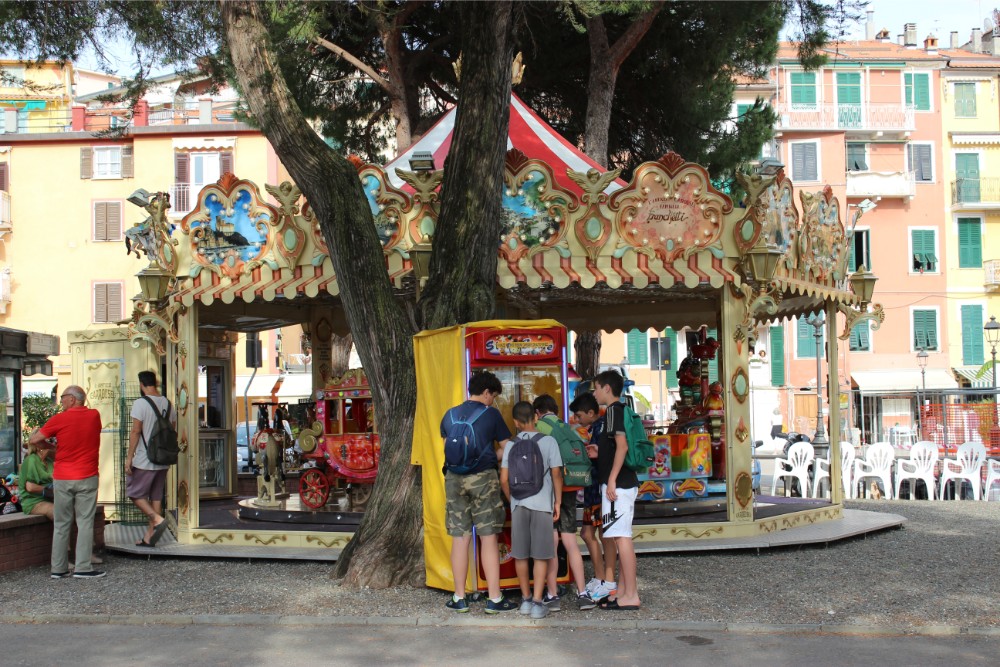 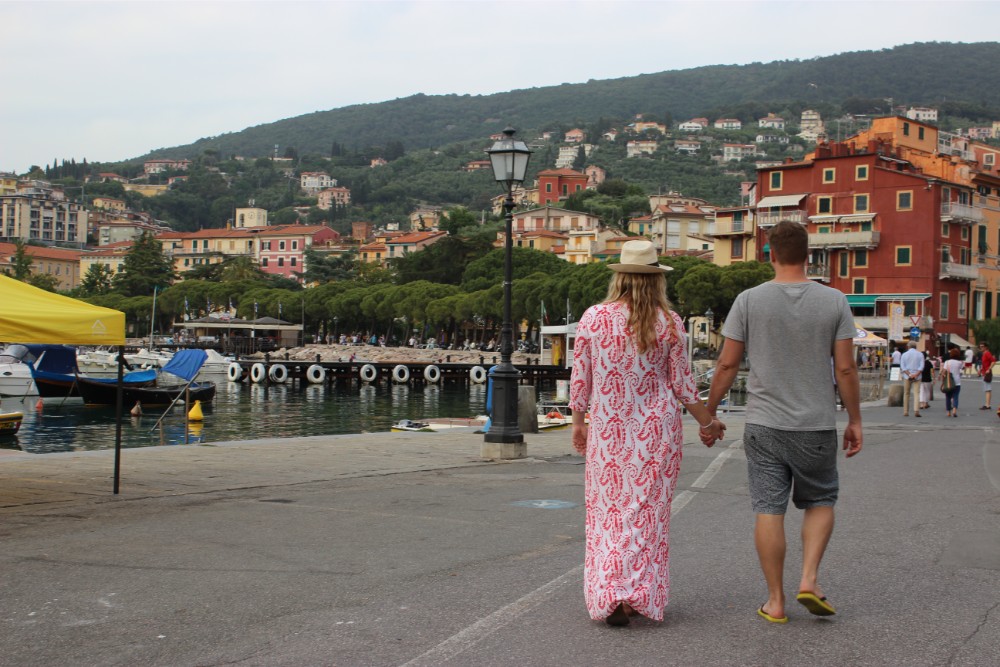 >Here we indulged in delightful people watching as the majority of the crowd are locals, with very few tourists in sight. Young couples flirt at waterfront cafes, children kick soccer balls beneath palm trees, and groups of white-haired men stroll along the beachfront promenade while the black-clad Italian mama’s catch up on the daily gossip in poetic, and enthusiastic, Italian. 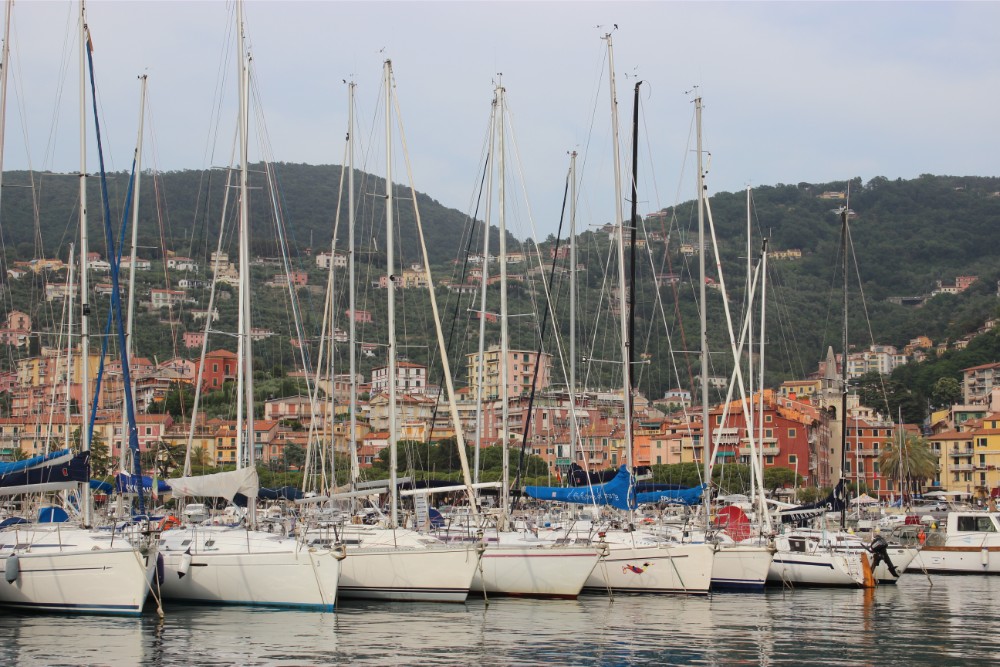 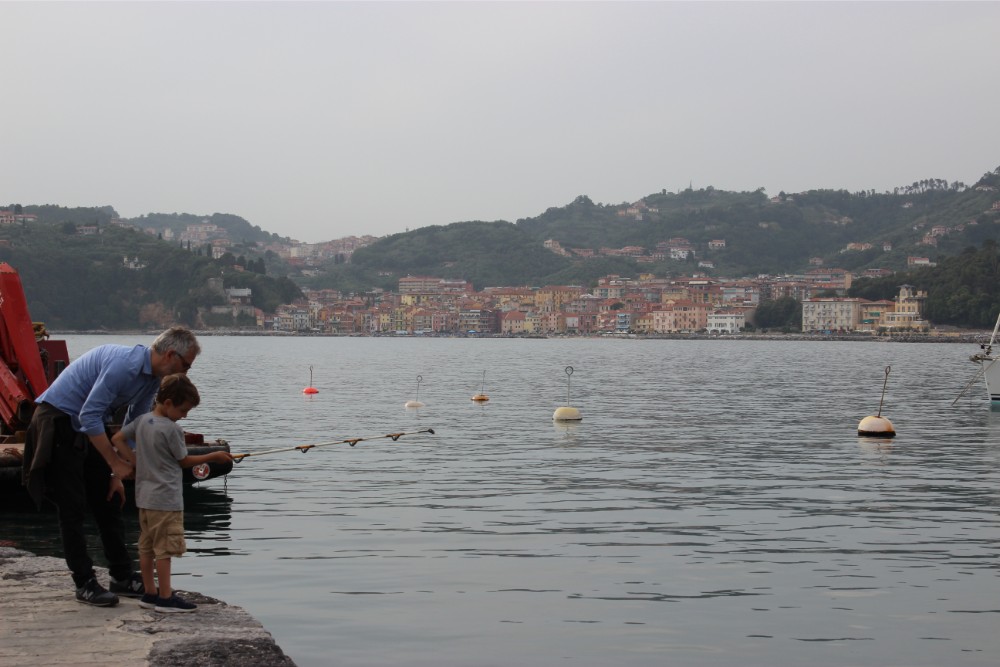 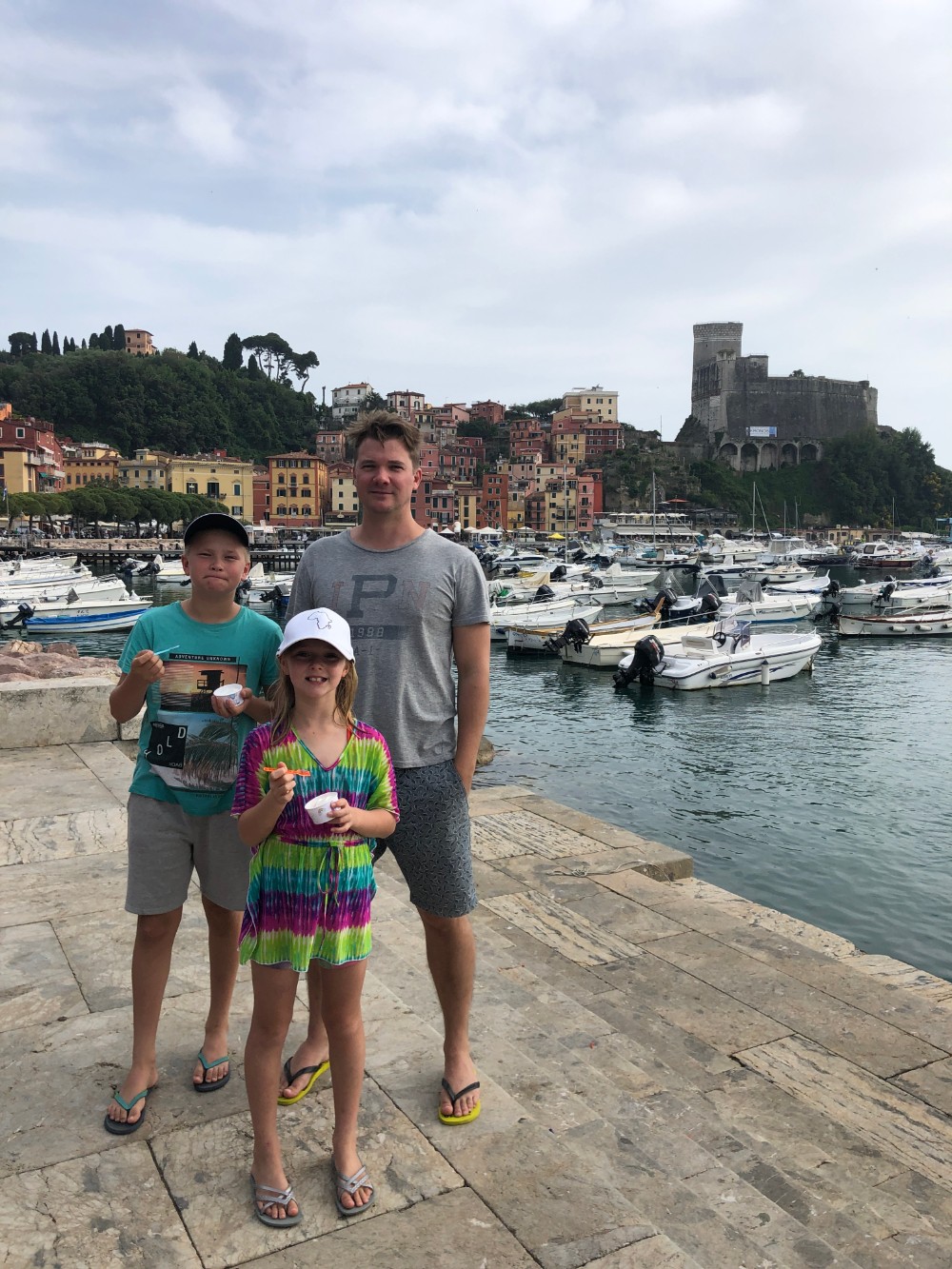 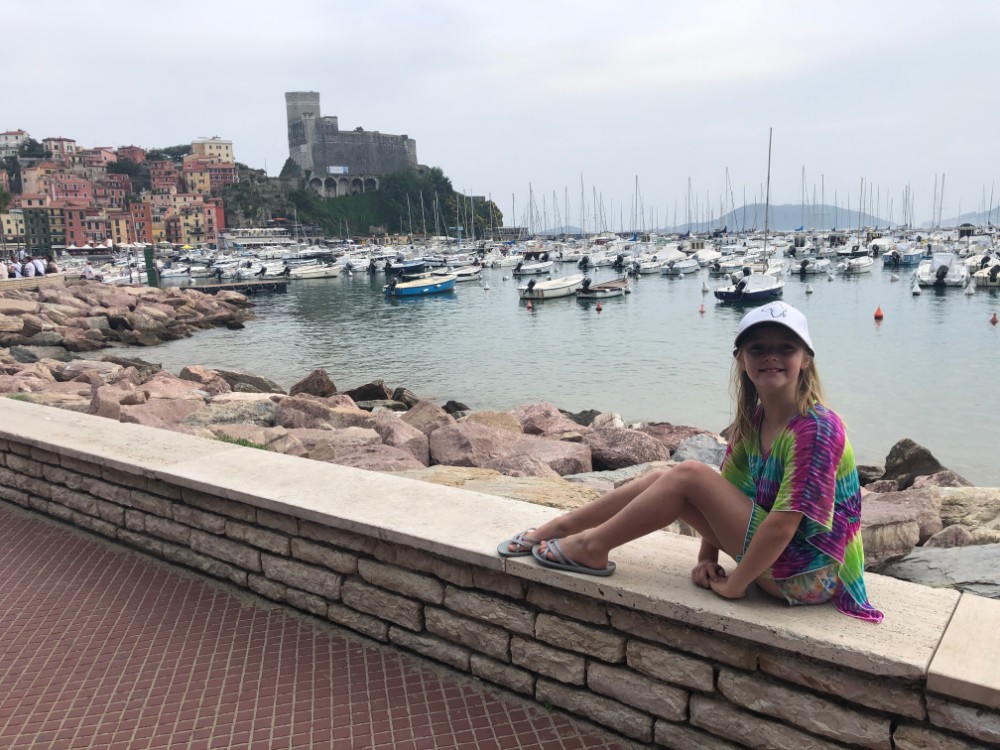 Standing guard over the town on the far end of the 2km promenade is Castello di Lerici or Castello San Giorgio, is a well-preserved 12th century castle that rises imposingly from the rocks at the water’s edge. Over the years Lerici has passed back and forth between the maritime powers of Pisa and Genova until falling under Genova’s city-state in 1256 and it has always been a popular port stop for wayfarers, pilgrims, and merchants between Rome, Genova and northern Europe. This castle was built by the Pisani in the first half of the 13th century and is considered one of the most spectacular in all of Liguria as it still retains its outer walls and the internal small Gothic/Ligurian chapel dedicated to St. Anastasia. Climb the stairs or take the lift to enjoy it’s impressive views across to Portovenere or visit the local Paleontology Museum to discover some local dinosaurs.

Below the castle are a number of narrow alleyways which form the historical quarter of Lerici and are home to the old Jewish ghetto (Via del Ghetto), which feels a world away from the tourist town below. Meander through the compact piazzas, and architecturally interesting buildings that hold plenty of appeal for those who enjoy exploring artisan shops, cute cafes and plenty of restaurants. 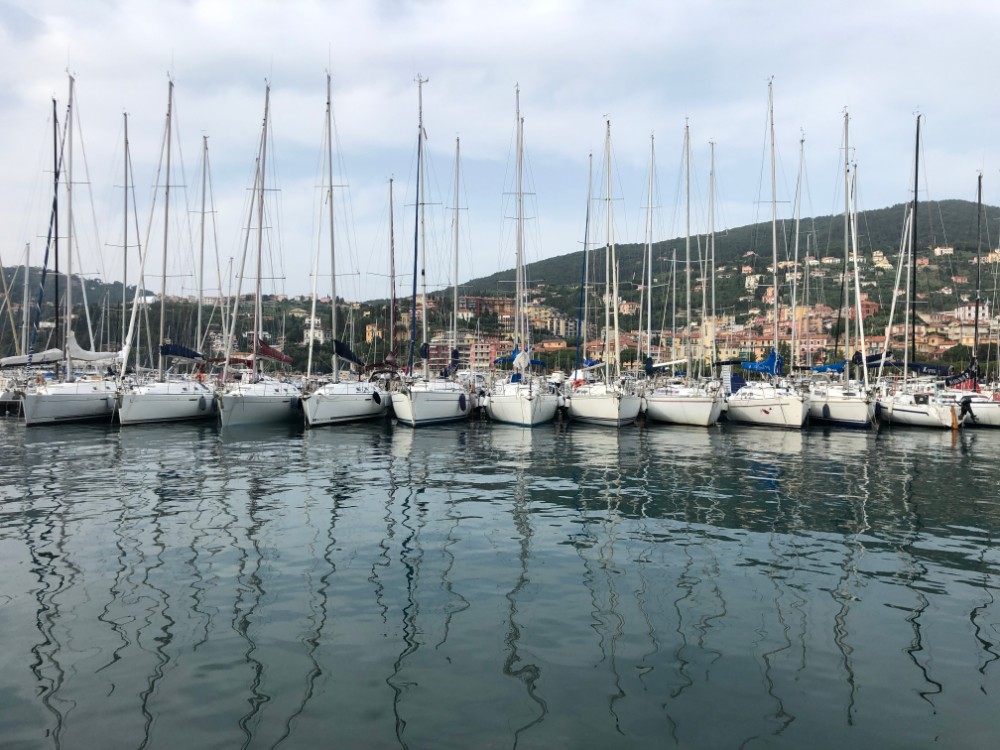 More Things to Do in Lerici

In addition to the castle, Lerici has preserved other traces of its historic, artistic and religious past. In the city centre in one corner of Piazza Garibaldi, you can visit the Oratory of San Rocco (13th-16th centuries), built on the ruins of an ancient 1287 church and expanded in 1524 it contains several notable paintings. The Torre di San Rocco is a Roman era tower originally built as a lookout tower and transformed into a bell tower in the 16th century. 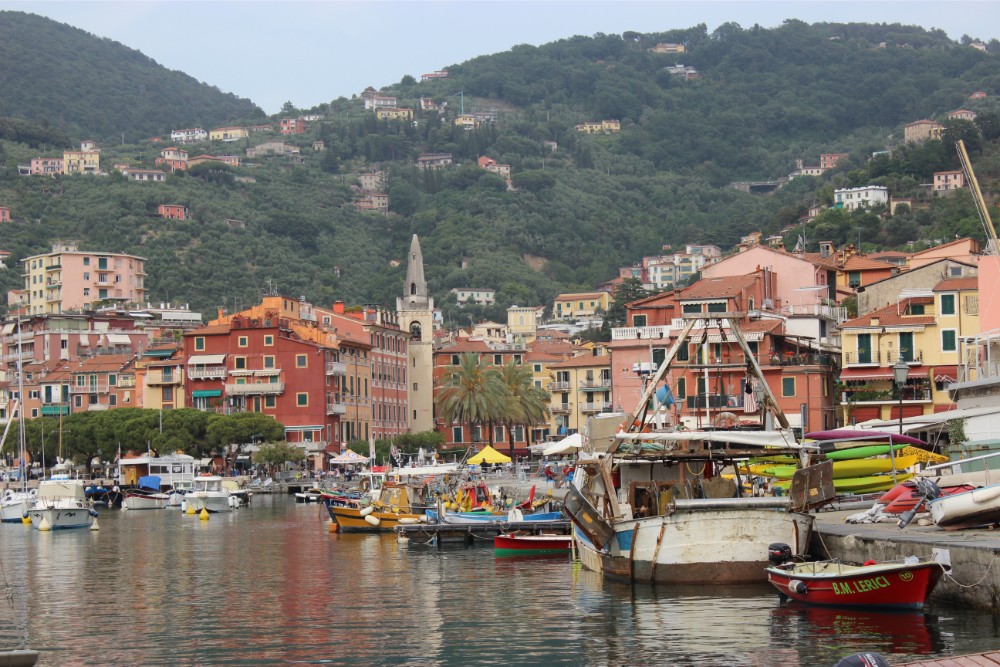 One of the most important religious monuments in Lerici is the 17th century baroque style Church of Saint Franci (St. Francesco), rebuilt around a church that is thought to date back to the 13th century.

Northwards there is a path to the nearby fishing village of San Terenzo located 2km from the centre of Lerici. This hamlet has retained its typical Ligurian feature and stretches along a wide beach, in front of which you will find the main hotels. The Castello di San Terenzo started life as a watch tower but was enlarged to defend the waterfront village against pirates and now hosts periodic art exhibitions. Situated on a small promontory that separates San Terenzo from Lerici, is Villa Marigola, immersed in rich and varied vegetation. The building is surrounded by a large park that houses the typical English-style Bocklin Garden, which contrasts with the Italian Garden. Literati might recall that San Terenzo was home to Percy B. Shelley from 1818-1822, before he drowned in a boat accident off the coast from here. He was buried at Villa Magini in San Terenzo. 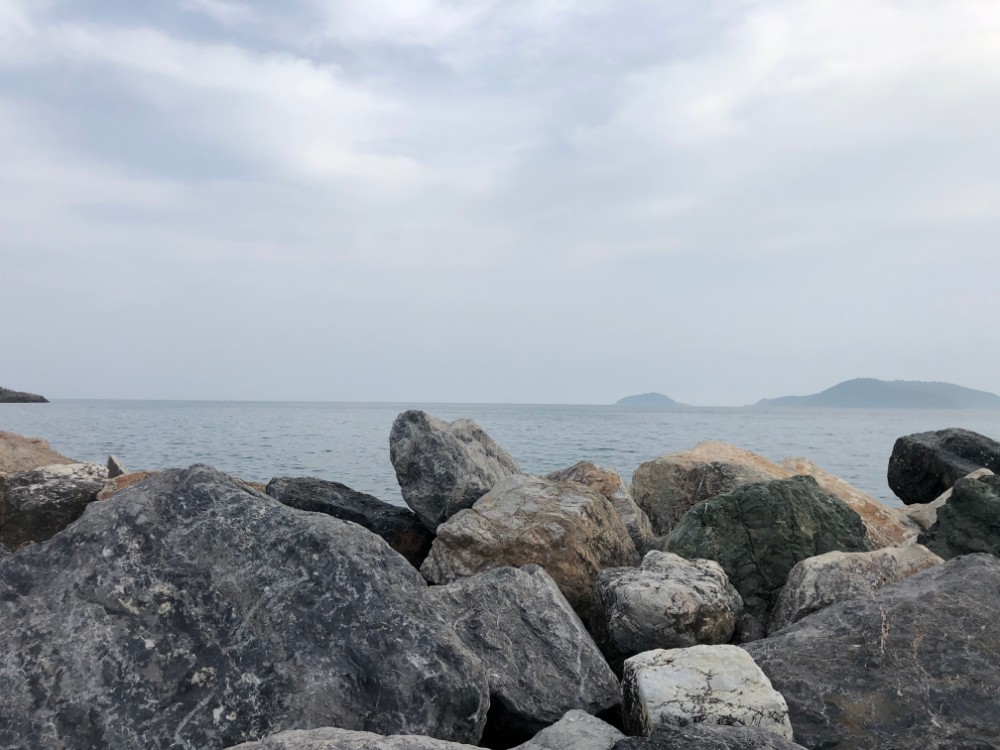 Alternatively walk along the path along the coast south to the pretty little village at Tellaro which lies on a small rocky peninsula that slopes towards the sea. The local architecture is particularly evocative: houses are built alongside each other and only separated by small, steep paths that are reminiscent of the winding Cinque Terre trails. At the very tip of the town, you will find the old church dedicated to St. Giorgio, which dates back to the second half of the 16th century and stands on a rock overlooking the sea. Tellaro is surrounded by hills, allowing you to hike amongst olive groves, dry stone walls and Mediterranean shrubs. The most intriguing local trail is the one that leads to the medieval towns of Barbazzano and Portesone. 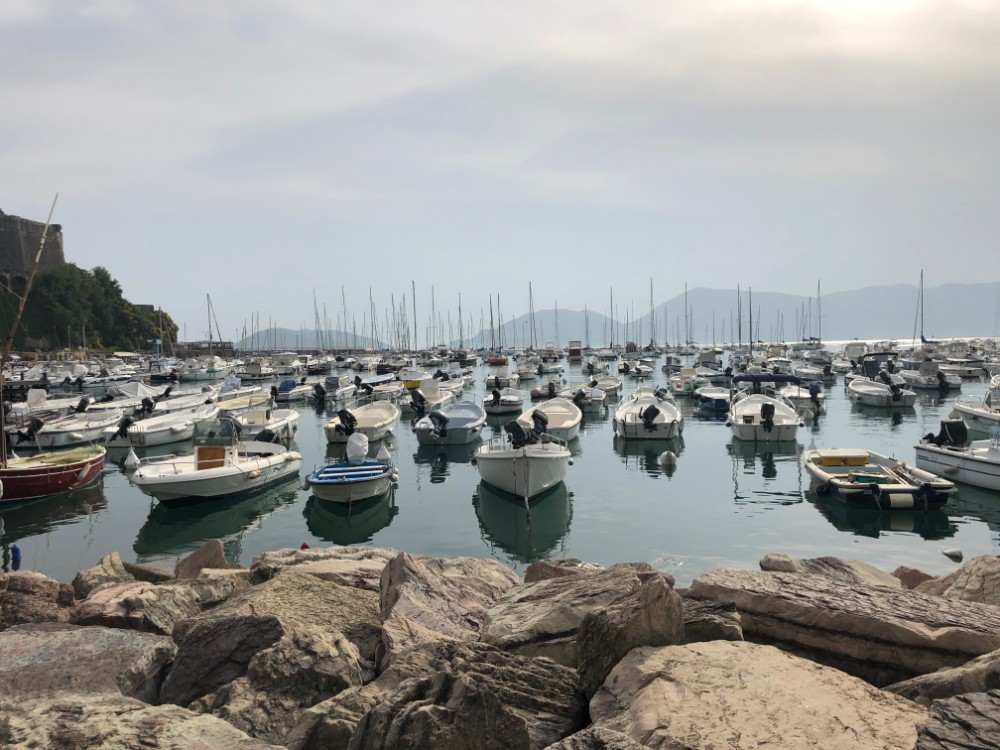 Boat trips to Portovenere and the Cinque Terre villages are available from the harbour.

You can also see the world’s oldest crucifix in the cathedral at nearby Sarzana. 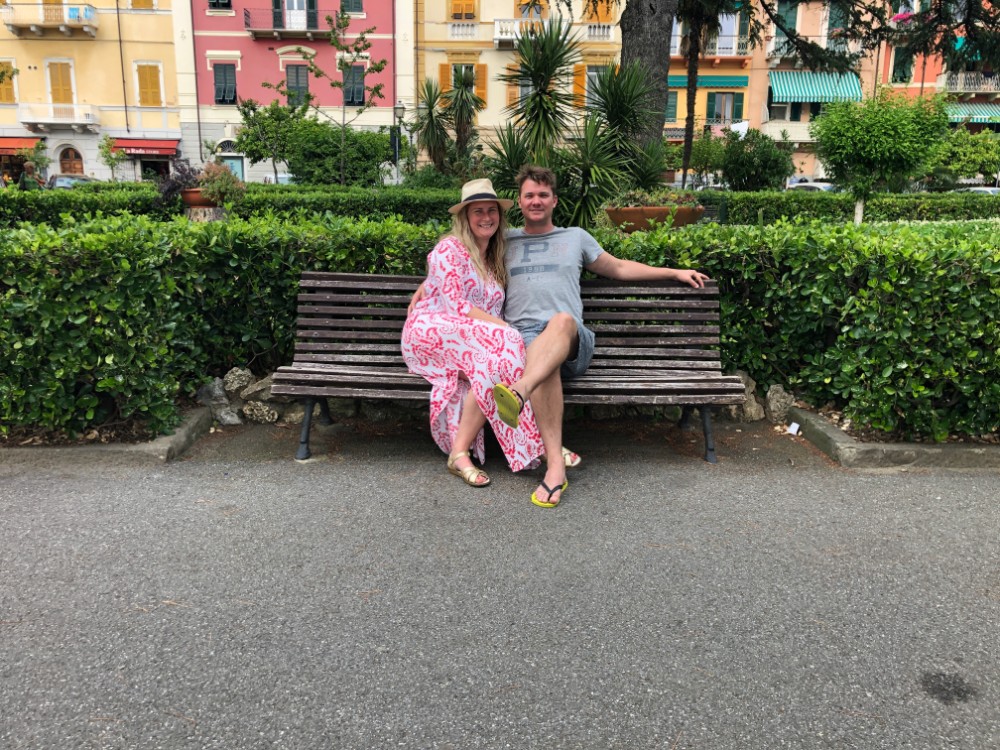 When to visit Lerici

Both parking and dealing with the crowds can become a challenge on a hot summer day so if possible try to visit Lerici outside July and August – the weather is pleasant almost all year round. 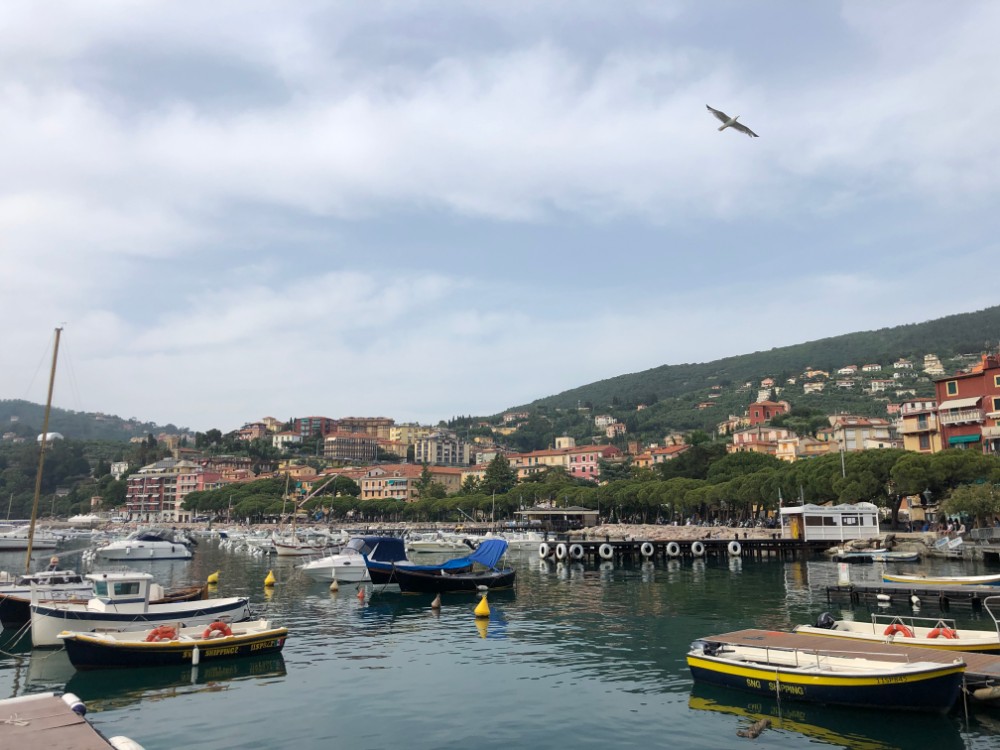 How to get to Lerici

Ferries connect Lerici to the Cinque Terre towns, as well as to Portofino and Portovenere.

Lerici has no train station. Most tourists arrive by car.

How to get around in Lerici

Walk: As in most Italian cities this is the best method for getting around.

Car: Nonresidents are prohibited from driving into the center of Lerici, which leaves visitors with few alternatives when the parking lot is full, as it often is during the summer. Though inconvenient, this restriction has limited the number of tourists and, in turn, has allowed Lerici to retain much of the authenticity that has captivated visitors for centuries.

Parking: Parking is a problem. There are just 500 spaces, and after that, there’s nowhere to go. The main pay parking lot near the Venere Azzurra public beach is a 15-minute stroll from the center of town.