One of the many things that could grant us joy in this world is the act of traveling. Often, people seek to venture into unknown territories in order to escape the growingly mundane routines of their everyday life.

While for some, traveling is deemed as a learning experience – a chance to expand one’s horizons and develop a deeper understanding of other cultures. Although the reasons for our wanderlust may not necessarily coincide, it’s undeniable that we humans share an innate curiosity that drives us to leave our comfort zones and explore.

Unless deliberately avoided, an automatic consequence of journeying through different places is the exposure to unique cuisines. Because of the natural effects of being positioned at different parts of the globe, a majority of, if not all, countries have their personal take on how to prepare food and which ingredients to use.

As such, it’s not surprising that travelers wish to keep an immortal keepsake of their meal as an added souvenir in the form of a photograph. 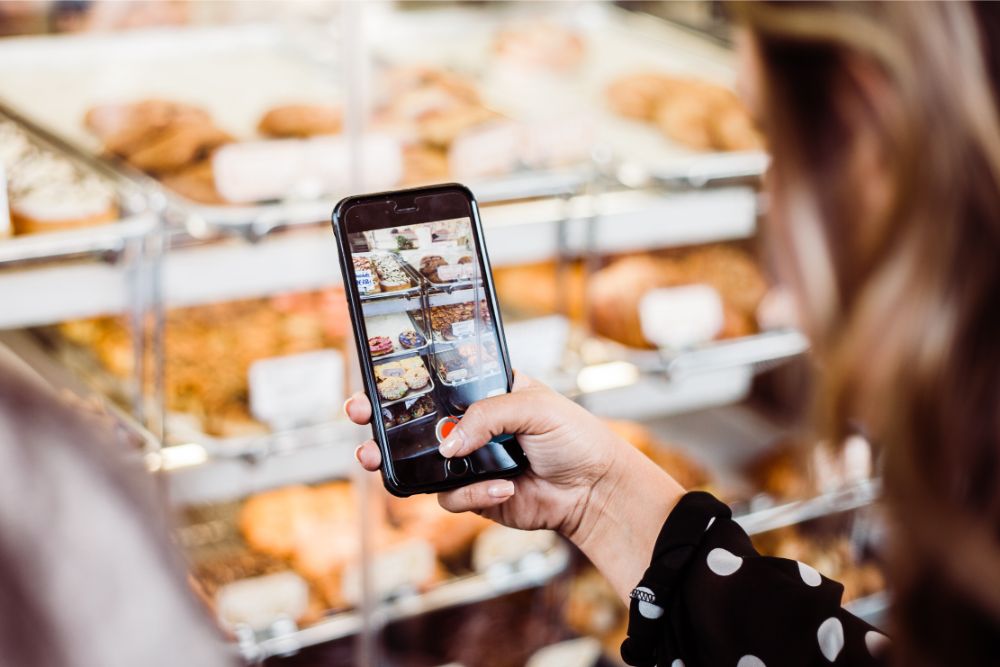 Listed below are a few useful tips on how to take photos of mouthwatering food while travelling.

When you’re not an expert photographer, you can always count on technology to make everyone think that you are. That’s why it’s crucial to know what kind of gear to bring with you during your adventures. Such items have to do the job and be manageable enough to carry in case you have to go on foot.

Here are some of the things you’d want to consider if you want to post decadent photos of food:

The camera body is basically the heart of your entire photography journey. One of the first things to look at is the size of the camera’s sensor. Full-frame sensors perform better under low light, which is very useful when you’re at a poorly lit restaurant or want to take a photo of your food on the go.

Of course, camera bodies with full-frame sensors cost significantly higher than those with cropped sensors. The alternative makes for better accessibility–meaning bigger budget for other travel itineraries. Although full-frame sensors do pull ahead in overall image quality, it isn’t to say that cropped sensors are a bad choice. You can still take beautiful shots of not just your food, but your entire trip with cameras that sport this kind of technology so long as you remember to be mindful of its crop factor. 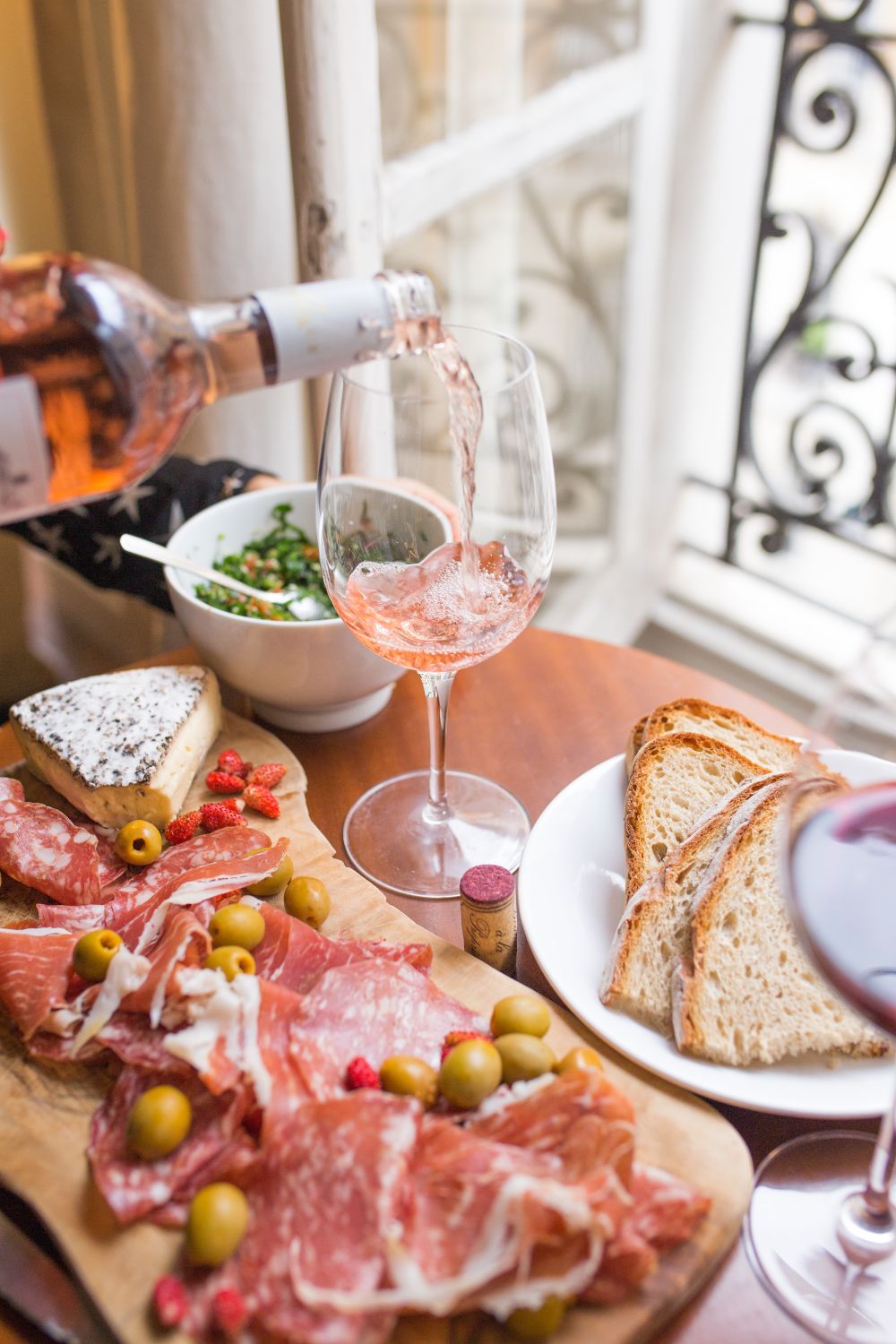 In a nutshell, a camera’s crop factor tells you the difference between your camera’s sensor and a standard 35mm film frame. So if the crop factor is 3, it means that a 35mm film is three times larger than your camera’s sensor, resulting in certain parts of your shot being cut from the frame. Once you’re aware of what this specification means, you can shoot your subject at a distance that best captures the food without cropping important details.

Your camera body’s ISO setting is also a vital factor in deciding which gear to bring with you. Since you won’t be at a well-lit environment all the time during your adventures, you have to have a camera body that can adjust to it appropriately without introducing a lot of optical noise.

Finally, you have to turn your attention to focus points and focusing options. If you’re an extreme enthusiast of food photography and have garnered enough skill to back it up, you’d appreciate a manual focus option on your camera body. Meanwhile, if you’re the type to just want to take a quick snap and dig into your food immediately, auto focus and focus points would weigh in immensely. The more numerous focus points, the easier it would be for you to simply point and shoot. 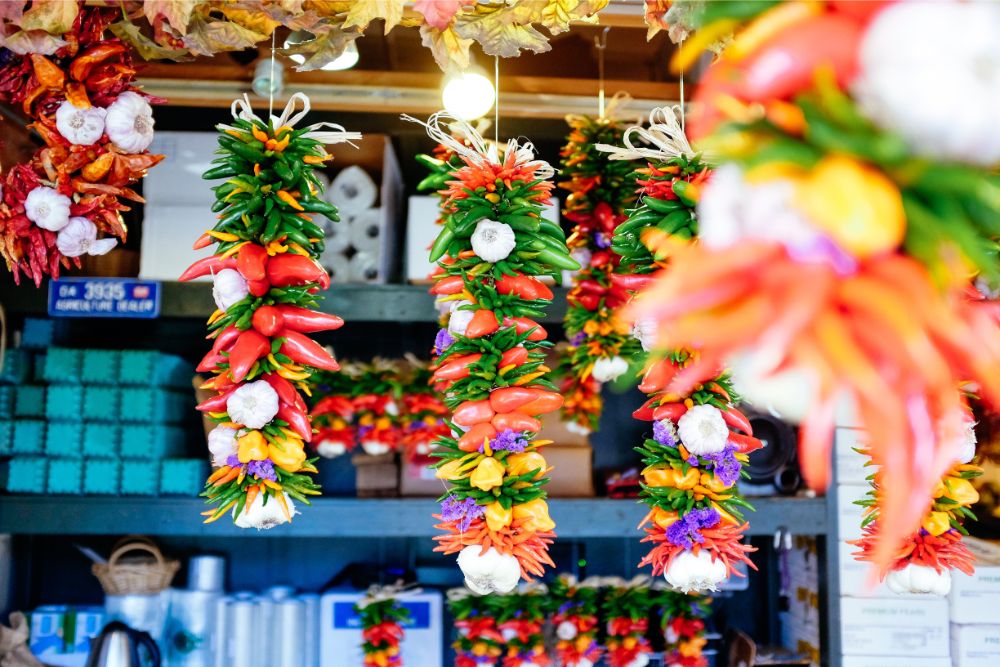 Aside from considering the weight and length of your lens, you should consider its aperture speed. The aperture speed is usually presented as an f-stop, and may be considered “fast” when it is of smaller value. That is, f/3.5 lenses are faster than f/5.6 lenses. The faster the camera lens’ maximum aperture, the easier it would be for you to capture mouthwatering food under poor light.

In relation to the previous discussion about a camera body’s crop factor, you should check how your lens’ focal length interacts with the sensor, especially when you don’t have a full-frame camera. This is important because cropped sensors rarely give you the full potential of your focal length. After having considered this relationship, it’s time to finally choose a focal length.

This is all going to depend on the kind of ‘feel’ you want to achieve with your shots. A camera lens’ focal length is the distance between the camera sensor and the point of light convergence in the lens. The higher the number that is measured in millimeters (mm), the more zoomed in your final image is going to turn out. If you’re going for close-up shots that highlight the minute details of your meal, you should opt for lenses with longer focal lengths, but if you’re leaning more towards capturing the entire atmosphere of the restaurant, you can get away with packing standard lenses like 50mm prime and macro. 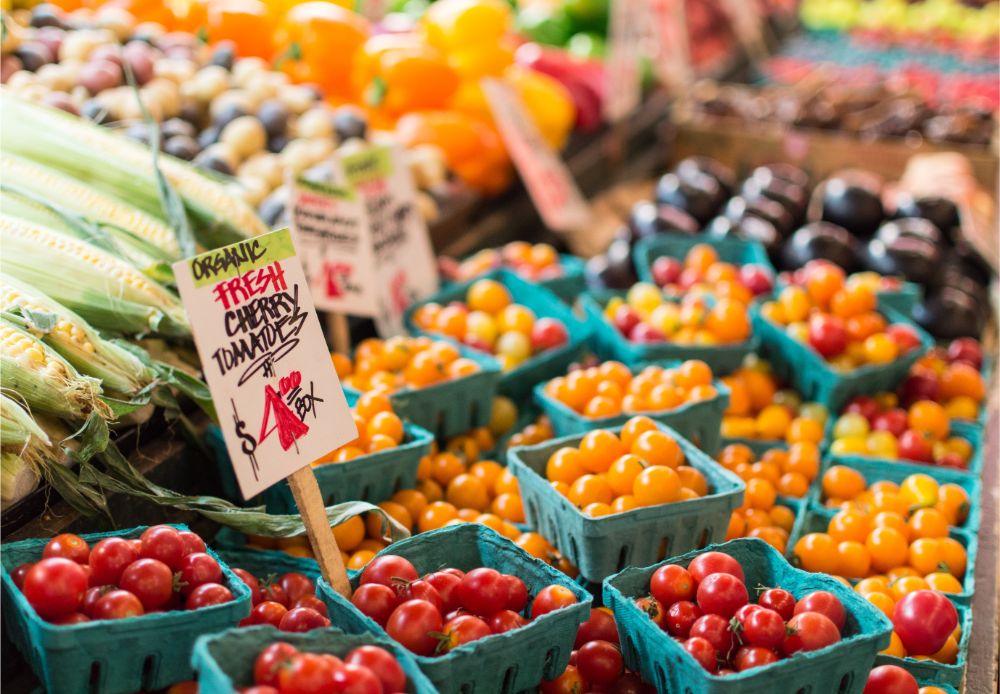 Although it may seem like a hassle to bring more equipment than just sticking to your camera and lens, you’ll find that it will definitely pay off when you look at your photos. Of course, eating won’t be the only thing in your itinerary when you’re on an adventure. Chances are, you’ll get to a food establishment tired from exploring the vicinity of the city or rural area. This makes for an unsteady hand while operating the camera. Tripods make sure you get mouthwatering images that are free from blur and shakes. 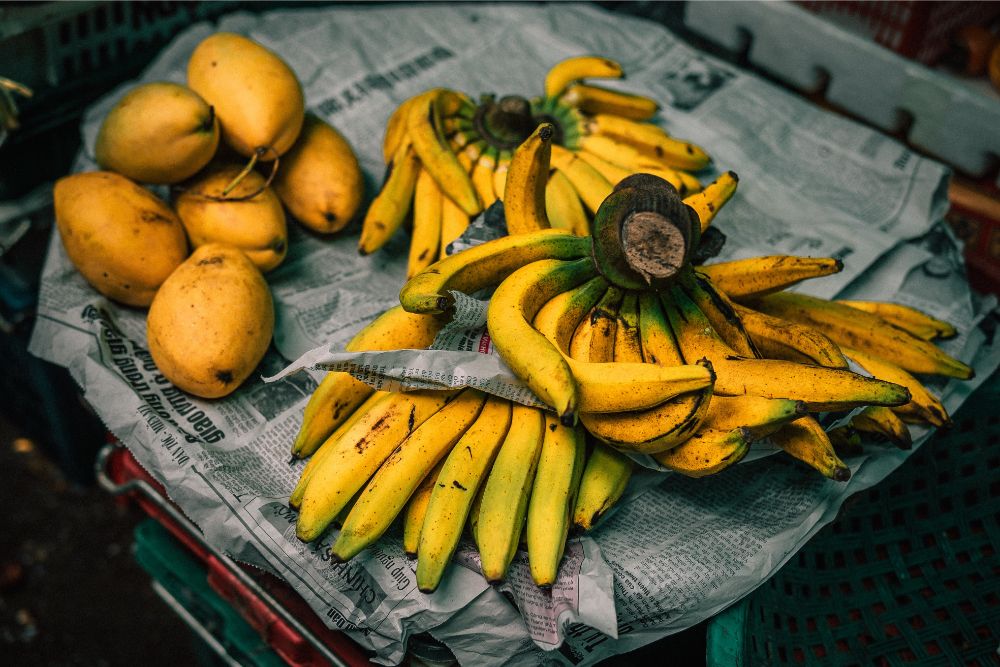 If you’re still thinking about the added weight on your carry-on, there are travel tripods that collapse into manageable sizes when not in use. Modern technology has also allowed for sturdy yet lightweight models that you’d hardly feel when you’re carrying on the go. Lighting takes everything to a whole new level. Whenever possible, try to take photos of your food with good backlighting as it would make any traces of steam that come out of newly cooked food appear on the photo.

Food photography shots that are taken with light coming in front of the camera makes dishes look flat and unappetizing, whereas the alternative would make different textures come alive and glisten. It’s also best to keep the lighting as natural as possible and avoid harsh flashes. Natural, diffused light will make your food look very pleasing to the eyes and make it appear as though you’re looking at it in real life.

Set Up a Good Background 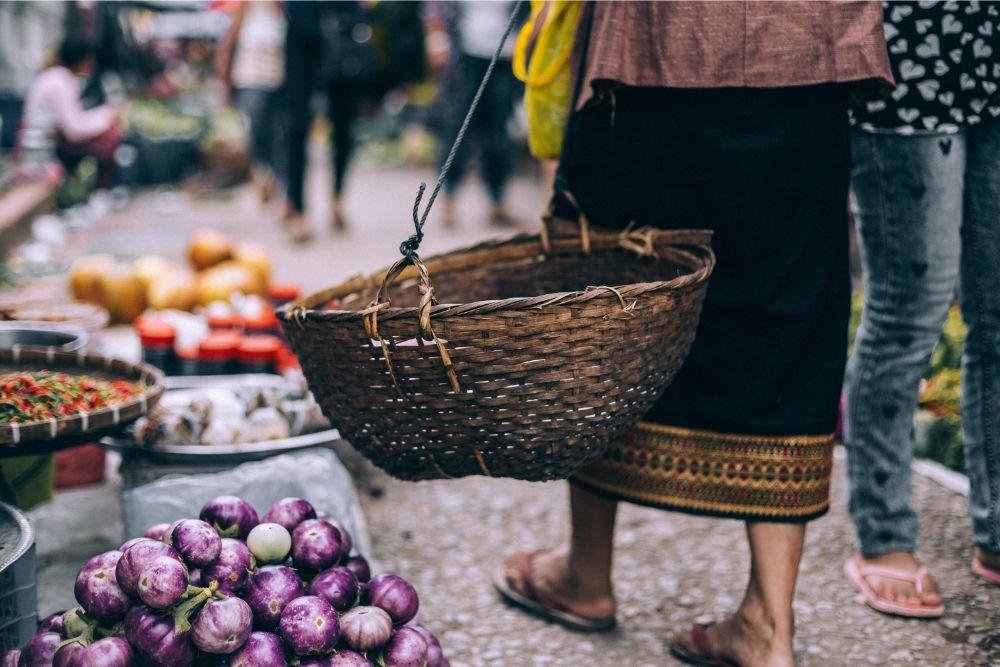 Traveling to foreign countries (especially the less-visited ones) would mean getting to experience cuisines that are mostly unheard of or are unfamiliar to the common public. As such, it is better to provide a bit of context to help people understand what’s going on in the photograph. This would also paint a better memory in your head when you’re flipping through your gallery once the trip is over.

You can play with spices and garnishes available to uplift the entire scene while simultaneously giving more depth to your story. If there are any sauces that come along with your order, you can try placing it beside the main subject or capture a shot where you’re pouring it over the food. If these items aren’t available, you can surround your food with other props such as utensils, napkins, or the table’s centerpiece to add a dash of contrast in color.

Shoot from the Right Angle Photography is all about telling a story. When you’re shooting a stationary object, you need to try twice as hard to convey whatever message you want to pass along to the people you share the pictures with.

Food is one of those subjects that have a lot of texture and dimension that can be hard to translate into a photograph. In order to effectively capture its essence, you can position yourself at different angles to highlight height, depth, and other details you can’t get when you’re fixed at shooting from just the top or side of a meal. 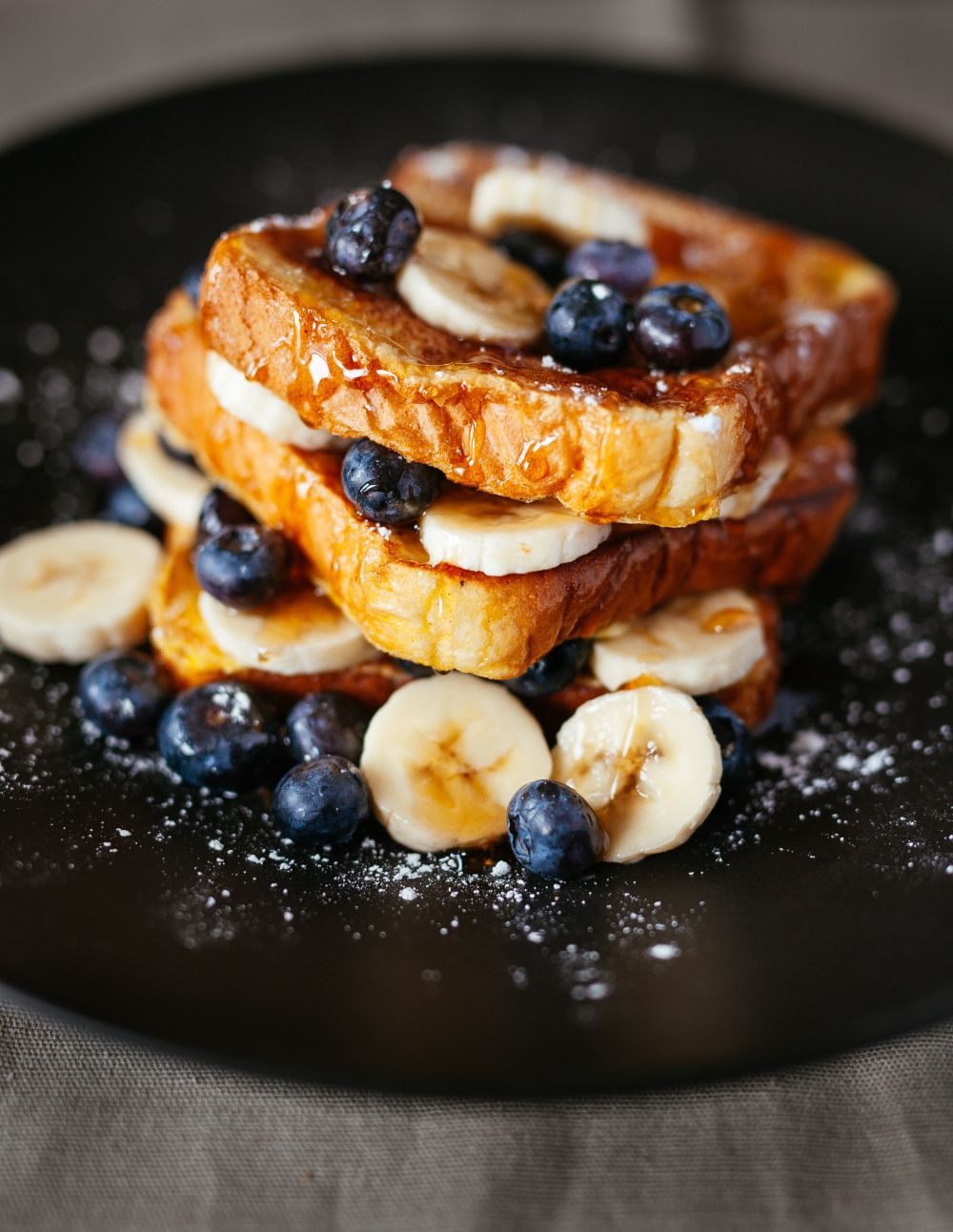 To give you a better idea of how this would work, consider shooting a parfait or the ice cream you’ll have for dessert. When you take the photo from the top, the resulting image would not give viewers the idea of how tall the scoop is or what’s going on in between each layer of cream in the glass.

Touch Up Your Shots Only as Needed It’s common to want everything to look perfect, but going overboard can make your end results look inauthentic and completely out of touch from reality. Counterintuitive as it may feel, the little flaws in your food – such as asymmetry or imperfect shapes – make it appear more appetizing as it exudes an aura of familiarity and tangibility.

Only use image manipulation programs to correct for minor details such as contrast, brightness, and color balancing. Food and travel almost always coexist. Keep a vivid and enticing record of your gastronomic adventures by mastering the art of food photography. My City: Things to do in Zurich, Switzerland (with kids!)