I love an evening at the ballet and one of my favourite’s is Giselle – the ultimate romantic ballet!

The good news for ballet lovers is that this enchanting ballet opens at Artscape in Cape Town on Friday 25 September featuring star dancers from the Royal Ballet in London and Cape Town City Ballet.

The captivating tale of a young peasant girl who dies of a broken heart, and then returns as a supernatural spirit to protect her lover, has been entertaining audiences for over 170 years.

Considered one of most romantic ballets, Giselle was an instant success with the public when it first premiered in Paris in 1841 and it has remained an all-time favourite ever since.

With this season of Giselle, the Cape Town City Ballet continues to build on its collaboration, fostered over several decades, with companies in the UK, Europe and the USA. One of the world’s foremost dance partnerships, Hikaru Kobayashi and Federico Bonelli from the Royal Ballet in London, will be seen in the lead roles of Giselle and Albrecht at two performances.

For the other performances, Cape Town City Ballet’s own Laura Bösenberg and Angela Hansford will alternate as Giselle and Thomas Thorne and Daniel Szybkowski as Albrecht. Claire Spector and Jesse Milligan will debut in these roles at two performances. The role of Myrtha, Queen of the Wilis, is shared by Kim Vieira, Rosamund Ford and Jane Fidler, while Hilarion will be danced by Xola Putye, Ivan Boonzaaier and Conrad Nusser. The role of Bathilde will be portrayed by Janet Lindup, the role of Giselle’s mother by Leanne Voysey and that of the Duke by Johnny Bovang.

The exquisite production is produced by Elizabeth Triegaardt and the original costume design is by Peter Cazalet. All but two of the performances in the Artscape Opera House will be accompanied by the Cape Town Philharmonic Orchestra, conducted by Graham Scott. 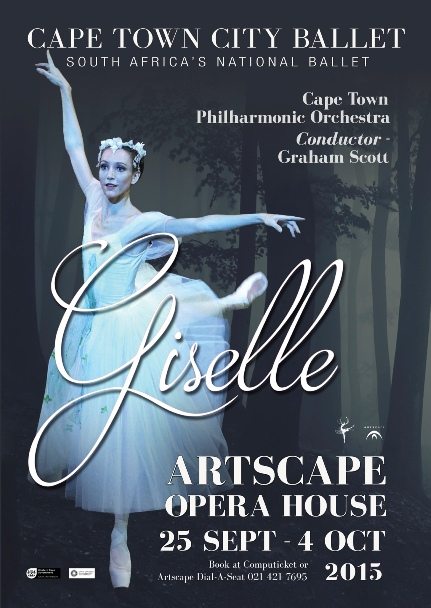 I can’t wait to go along and enjoy the Cape Town City Ballet’s production of Giselle at Artscape in Cape Town. Performances are on from 25 Sept to 4 October and tickets from R100 – R300

WIN a hamper from Lancôme worth R2420!

A stay at Gondwana Game Reserve on the Garden Route