As someone who usually prefers pretty, floral fragrances I was recently blown away by how much I really loved this new heavier, seductive scent… Giorgio Gold by Giorgio Beverly Hills is classified as an Oriental Floral Woody fragrance and it’s really rather different from what I would usually wear, but truth be told, I’m sold! and fortunately so is my husband. I had wondered if he might not take to the new me (scent speaking, of course!) but he actually really liked it.

And I have an inkling as to why…

At the heart of this new fragrance is a sensual note known as Oud – one of the most expensive raw scent ingredients in the world. Known as oud (or oudh), it comes from the wood of the Southeast Asian agar (aquilaria) tree. When the wood becomes infected with a particular type of mold, the tree reacts by producing a dark, scented resin, which is often called “liquid gold.” “Oud” is used to refer to both the resin-saturated wood (the agarwood) as well as the oil distilled from it. One reason oud is so expensive is because it is so rare. Fewer than 2% of wild agar trees produce it which means oud oil can cost as much as £20,000 per kilogram depending on its purity!

This ancient seductive scent is dark, rich and opaque. It has been used for thousands of years in the Middle East and Asia both at home and in religious ceremonies and is mentioned as early as the third century AD in ancient China. In the Middle East, where oud is most common, it is considered a cultural touchstone and highly prestigious. Anyone from the region can recognize its scent immediately.

This was my first exposure to this intense scent – and I’ve been enraptured! It’s a heady, musky scent that speaks of secrets… It’s really rather captivating. 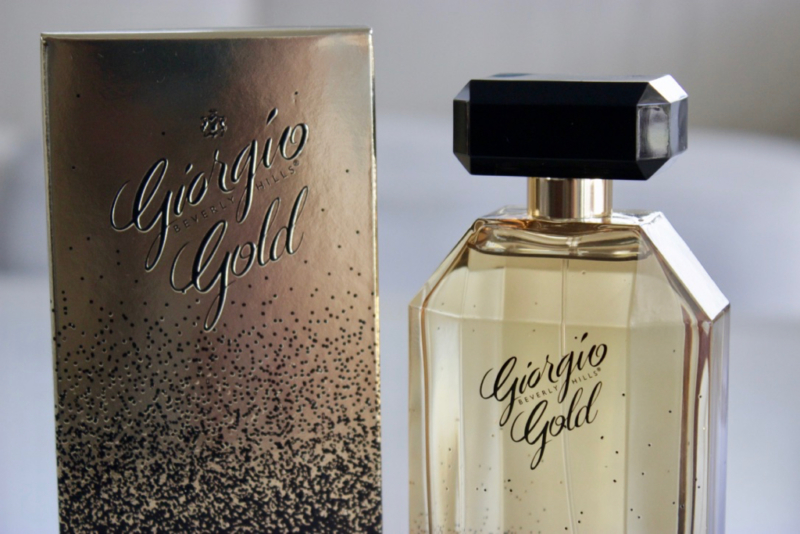 Inspired by the warmth of oriental notes and the golden charms of the East, this is a powerful, sophisticated scent and ambery aroma, Giorgio Gold, is a fragrance that performs.

It is a luxurious parfum draped in a golden shimmer and emanating a daring, irresistible quality that encapsulates all that is treasured and scarce.

Aside from this mysterious heart note known as Oud, the other notes in Giorgio Gold include top notes of glistening Golden Quince and juicy Black Plums, covered in a swathes of gentle Jasmine. The heart unfurls with the potent attraction of Bulgarian Rose. Its feminine floralcy is enlightened by soft Cedar Wood and wealthy Oud, which as mentioned above is valued for its scarceness and depth.

The aroma remains intrigued with sensuality and warmth ,while the foundation is decorated with lustrous Amber, Vanilla Bean and Cashmere Wood.. Like a fascinating evening event, the perfume bottle amazes in tones of black and gold. The attraction of gold, black and amber create a bottle that is a magical gem. Like a valuable gemstone, its structure denotes the vitality of the fragrance inside, while the magnetic ambiance of the bottle appears to draw in to it gold glitter – a symbol of wealth, splendor and glamour. Giorgio Beverly Hills perfumes stand for everything that is Beverly Hills, California – glamour, luxury and opulence.

The Giorgio Beverly Hills Gold woman is gorgeous and effortlessly classy. She is daring of character and loves luxury. Glowing and elegant, she satisfies her every wish with the finest quality luxuries the world has to offer. She treasures customs while flashing her one of a kind and outstanding style.

Luxuriously self-indulgent, this exquisite aroma would suit sophisticated, powerful, assured women who have the courage to wear it!

Small plates menu at Harbour House at the V&A Waterfront