Family, Kids, Movie Reviews, My Reviews, Things to do with Kids
Aug 16, 2013
by Kathryn Rossiter
0

Having a mom that blogs certainly has it’s perks, so my kids discovered this week when at 5pm on a school night we all headed off to be some of the first in South Africa to watch Disney’s newest animated movie, Planes, along with Coke AND Popcorn.

After our previous movie outings which resulted in the 3 year-old wanting to leave after a few minutes I wasn’t too hopeful but I needn’t have worried… From the first moment, the eyes behind the (super cute) 3-D glasses were transfixed to the HUGE screen and didn’t leave it once in 90 mins!

The latest offering from the same producers of the huge hit “Cars” comes “Disney’s Planes,” an action-packed 3D animated comedy adventure featuring Dusty Crophopper, a plane with dreams of competing as a high-flying air racer in the “Wings around the World” race. But Dusty’s not exactly built for racing, this little crop duster plane happens to be afraid of heights! So he turns to a seasoned naval aviator, Skipper, who helps Dusty qualify to take on the defending champ of the race circuit. Dusty’s courage is put to the ultimate test as he aims to reach heights he never dreamed possible, giving a spellbound world the inspiration to soar. 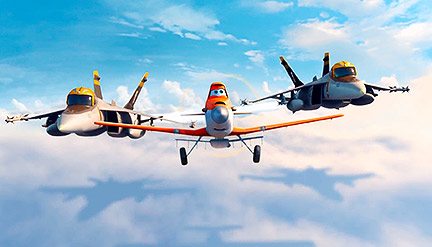 Each member of my family thoroughly enjoyed this movie. The main characters were likeable and there were far fewer evil or scary ones than is sometimes the case in kids movies – which I prefer, esp for younger kids. The story line and style of animation is very similar to Cars 2 which will appeal to Lightening McQueen fans. There are also some familiar-looking faces such as the trusty side-kick best friend in the form of a fuel truck named Chug and a sweet forklift-mechanic named Dottie (think female Guido!)

Dusty is a great little guy, he isn’t a fame-seeking hero with superpowers. He’s a good guy with talent who wants to be better than what everyone expects him to be. He works hard, chooses integrity and the kind of friend who you want to have on your side. It’s a classic underdog story!

Throughout the movie there are lovely lessons such as perseverance, friendship, acceptance, loyalty, honesty, practice makes perfect, following your dreams and facing your fears. Lots of topics you can bring up again after the movie for some great conversations!

As I mentioned the “scary” bits are far less than other movies I’ve seen recently which is great for parents with younger kids, that being said it is worth noting that there are one or two moments when you might want to divert their eyes… a crash landing into the sea, a remembered war scene with gun fire and the race has a few tense moments plus some nastiness from the antagonist, Ripslinger.

This little movie is definitely a great family outing option for the upcoming rainy weekend, and although parents might feel like they’ve seen it before, kids will really enjoy all the action!

Tourists in our own home town - Cape Town!