I’m in the midst of planning a Disney Princess themed 4th birthday party for my little princess which made me think that there might be a few girls out there who haven’t yet given up the princess dream and might like to know about this exciting opportunity!

From Monday 7 April to Saturday 3 May 2014, future fashion designers will have the opportunity to design their own Disney Princess dress and upload their designs by logging onto a special website (and if they aren’t near a computer, they can submit their designs at all Toys R Us stores nationwide) 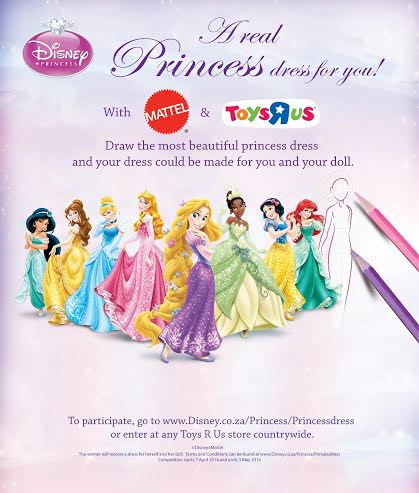 Following a round of judging, the winner will have their design turned into a real dress for their own custom-made Disney princess Doll. The dress will be transformed from design to finished gorgeous creation by one of South Africa’s leading fashion designers. And then the winner will get their dress made especially for them by the same designer! Yes, not one, but two dresses, one for the winner and one for the winner’s own doll! Pretty much what dreams are made of for Disney fans!

So with the only limit being your daughter’s imagination why not let her lose with a sketch pad and some colourful crayons to design her own amazing creation!

With the eleven Disney Princesses to offer inspiration there are so many options! Which Disney Princess will inspire your little princess? Will it be Snow White, Cinderella, Aurora (Sleeping Beauty), Ariel (The Little Mermaid), Belle (Beauty and the Beast), Jasmine (Aladdin), Pocahontas, Mulan, Tiana (Princess and the Frog), Rapunzel (Tangled) and Merida (Brave)?

Log on to www.disney.co.za/princess/princessdress or visit any Toys R Us branch nationwide, until 3 May 2014* for more info about this cool competition.

How to Help: Buy Bobbi Brown's Pretty Powerful Mascara! (plus a chance to WIN)