Every year Bobbi Brown creates a beautiful limited edition product that benefits various charities in different countries and this year she has brought out the Pretty Powerful mascara. What is amazing about this campaign is that unlike other cosmetic charity initiatives, 100% of the proceeds from the sale of this product are donated to a specific charity!

Pretty Powerful is a campaign that focuses on confidence and sharing women’s stories. It started with makeup but evolved into empowering women and girls through education. There is nothing that makes a woman or girl feel more confident than being educated and, therefore, able to care for herself and for her family. That is pretty powerful.”

Bobbi Brown recognizes that many women and girls do not have the resources and opportunities to truly realize their inner strength and beauty. Makeup alone cannot even the playing field for women and girls across the world, but, Bobbi believes that those who create, apply, buy and wear makeup, can make a difference. The Pretty Powerful Campaign is about realizing your own inner beauty and power while also giving other women and girls the chance to feel beautiful by excelling in work and life, too!

The Pretty Powerful campaign’s main aim is to empower, educate and up-skill women and girls – something that is really essential and often overlooked. This year the campaign will be supporting a charity in South Africa, Heartbeat Foundation, an amazing charity that cares for the emotional well-being of orphaned and vulnerable young women suffering from the impact of HIV. The great news is that by buying your own Pretty Powerful Mascara (online or at any Bobbi Brown counter), you are supporting a charity right here in South Africa! 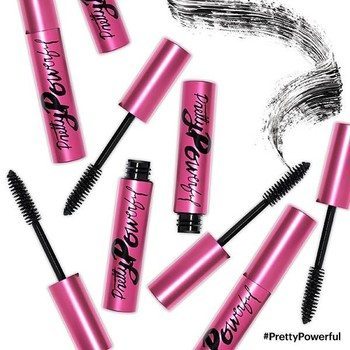 The Pretty Powerful mascara in Black by Bobbi Brown is a quality mascara in beautiful packaging. (Bobbi’s best-selling “Everything” mascara in a limited edition pink tube.) The brush is a very traditional mascara brush with a tapered end and a large surface area that allows for maximum results. The mascara glides on the lashes easily, with no clumps or smudges in sight! After one coat my lashes appeared longer and thicker and this was even more evident after a second coat. The results I achieved are pretty and natural – a perfect every day mascara

So, if you’re due for a new mascara (and, considering you are meant to replace yours every 3 months you most likely are!), why not get down to your nearest Bobbi Brown counter and get your hands on one of these pretty pink tubes. At R310 it might be more than you usually spend on this makeup staple but when you consider that 100% of the price is being donated to further your fellow women then it’s money well spent! While you’re there remember to book in for one of their really great Pretty Powerful makeup lessons!

And just because I’m feeling generous I’ve got 1 x Pretty Powerful mascara from Bobbi Brown worth R310 to give away today!

2. Fill out the form below and answer the question: What makes you feel pretty and powerful?

You can do one or both of the below but please submit your details via the form one more time to let me know what you did. Please pop over and support my fellow Pretty Powerful bloggers:

P.S. you might even be able to get one more entry to win one of these fab mascaras!

Find out more about the Pretty Powerful campaign by visiting www.BobbiBrownCosmetics.com/PrettyPowerful where you can choose to make an additional donation to one of the five international organizations who are part of The Pretty Powerful Campaign this year.

The prize is one Pretty Powerful Mascara by Bobbi Brown and the giveaway is open to South African residents only. The giveaway will run from Tuesday 8 April – Friday 11 April 2014. The winner will be announced on Friday, 11 April 2014.

Design a Dress for a Disney Princess