I was asked to contribute to an article on Marie Clairvoyant, the online presence of Marie Claire magazine in South Africa. They asked some Twitter moms to share their thoughts on the recent controversy surrounding Gwyneth Paltrow’s range of designer bikini’s for young girls. You can read the summarized version of my article as well as the thoughts of another mom on the site over here. As my original article was shortened due to space I thought I would publish it in full here for you to read and share your thoughts about the issue too!

Here is the image in question: 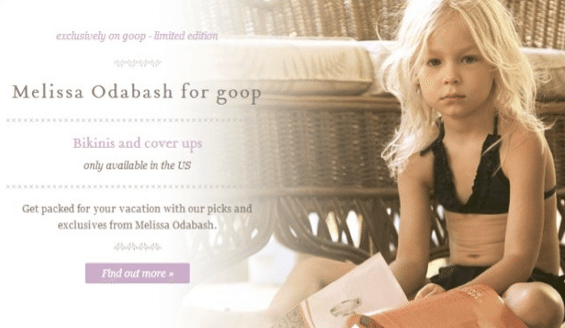 Recently the “world’s most annoying” and simultaneously “world’s most beautiful” woman – Gwyneth Paltrow – has come under fire from the British charity Kidscape (whose mission is to prevent bullying and child sexual abuse) for “sexualizing young girls” by featuring a new range of Melissa Odabash designed bikini’s for girls on her website, goop.com.

Now as a mom of a daughter (and a son) I’m well aware of just what a huge challenge it is for parents to raise kids with a healthy self-image in an ad-rich, photoshop and plastic surgery obsessed society, but do I believe that Gwynnie is trying to “sexualize” these girls by featuring them wearing bikini’s? In a word – No.

I think the issue is one that has been around for years – the fashion industry is geared towards sexualizing everyone these days, be they 3, 13 or 30. Using young kids in ads, not as kids, but as mini-models is essentially the problem. Photographing them in provocative poses, with adult-like pouts is not ok. Photographing kids wearing a swimming costume on a beach with a bucket and spade is fine! Let kids be kids. That is the issue, not the bikini.

Let’s face facts, little girls love looking like their moms. My own 3 year old daughter is obsessed with make-up and fashion even MORE than me and it’s not something she has been taught. She just loves all things girly! Bikini’s for kids have been around for decades – and it’s nothing new for little girls to want to wear them. I’m sure we all at some point nagged our own moms for a bikini like “so and so”. My daughter has been hankering after a two piece for months after seeing myself and her pre-teen cousins wearing them in summer. I don’t think there’s anything inherently wrong with wearing girls wearing bikinis. In fact there’s nothing wrong with small girls running around in only their bikini bottoms if that’s what they prefer – I want to instill a sense of confidence in her body, not shame – but the truth of the world we live in is that I would probably only allow her the freedom to do this at home or in a trusted environment. I’m not keen on flashing too much flesh at the beach – for her or myself. You never know who’s got their camera out for the wrong reasons!

If we are honest Gwyneth has been accused entirely because she is Gwyneth Paltrow and as a society we love to see the rich and famous do something “wrong” but as she is a mom herself I really doubt for one minute her intention would be to “sexualize young girls”. She is just as much a victim of our highly sexualized society as all of us are. We have all become immune to the provocative images of kids because we see them every day, everywhere. Take a look at just about EVERY children’s clothing catalogue or shop out there and you will find images of kids looking far older than their years wearing clothes that are quite inappropriate for them such as tiny mini skirts, knee high boots, black clothes with sexy slogans. Maybe the people to question about this are not the advertisers, brands or fashion mags but rather the mothers and fathers who are allowing their kids to be photographed in this manner. Aren’t children the responsibility of the parents? In the same way I would freak out about a strange man photographing my child in her costume on the beach why would I think it’s ok to do the same FOR MONEY???

If we’re going to get sticky about this topic let’s remember that many of the models featured in fashion spreads and on the runway are also under the legal age for most adult activities, sex included, but we still see them posing in very sexualized images – where are the parents of the 15-year-old wannabe model?

I don’t think it’s a bad thing that the fashion industry is forced to face this issue. I really do hope something good comes from all the hype but if we’re going to be pointing fingers there are far worse culprits guilty of very real crimes out there and if we’re going to be making a big issue out of something then THAT is what we should be focusing our efforts and resources on – getting the real criminals, child pornographers and child sex offenders behind bars and stop picking on Gwyneth!

What do you think about this issue – I’d love to hear your thoughts so feel free to share them (whether you agree or disagree) in the comments below!

What I... Fathima from Happiness is...

Want to know the Secret of Sexy Shapewear?