Our renovation project of 2016 was just about turning our ordinary suburban home into the one of our dreams. It was no Architect-designed masterpiece of a mansion, just an upgrade to our current home of 15 years. Plus a few extra elements to hopefully make our space work for our family for at least another 15 years! The main motivation for the renovation was the fact that we were getting to a point where 1 bathroom was just not cutting it for a family of 4!

We had a separate toilet from the basin and bath (and lovely shower and shower curtain OVER the bath) BUT the mornings trying to brush our teeth, showering with an audience or all racing for the 1 toilet on returning home from our outing had started to wear thin….

My deep desire of an en-suite of my very own was growing larger by the day.

Finally, after literally YEARS of talking about renovating our home we decided to bite the bullet and do it.

Then we changed our minds…

And then we opted to try to get just an en-suite bathroom.

Finally we realised that the upheaval of it all, and the knock=on effect of changing one room into an en-suite bathroom, meant that we really DID have to bite the bullet and do it all!

We were soooo nervous. This was by far the biggest and most expensive project we were going to tackle in our lives thus far. And quite possible for ever!

Fortunately our renovation project was one of the smoothest I’ve ever heard about. That’s not to say it was a breeze. There were plenty of days when we were at our frazzled best BUT we managed to make it through – alive and still married!

I think the vast majority of our renovation success was due to the fact that we managed to find great suppliers who were invested in making our “dream home” a reality despite the fact that it wasn’t located overlooking the Atlantic Ocean or Constantia Vineyards with a budget to match!

Our team went out of their way to make this happen for us and we are so grateful to our architectural technologist and builder who were both brilliant, not to mention the building team and additional suppliers, who made our building project such smooth sailing. (A few days into our renovations, when the entire roof came off, a friend suggested I should rebrand our “renovations” to “rebuild” to capture the sheer size of the project we had taken on!!)

One of the best investments we made when it came to our building project was connecting with Bespoke Bathrooms to help me with the design of our 2 bathrooms: The NEW en-suite bathroom and the conversion of the separate loo and bathroom to become one space.

There was a separate bathroom with single basin and a bath with a shower over the bath (and the siff-est shower curtain situation ever!!) The only toilet in the house was located next door in a separate room – that meant at least someone could bath/ shower and another person could go to the loo at the same time but it did mean that both areas were really small and cramped. 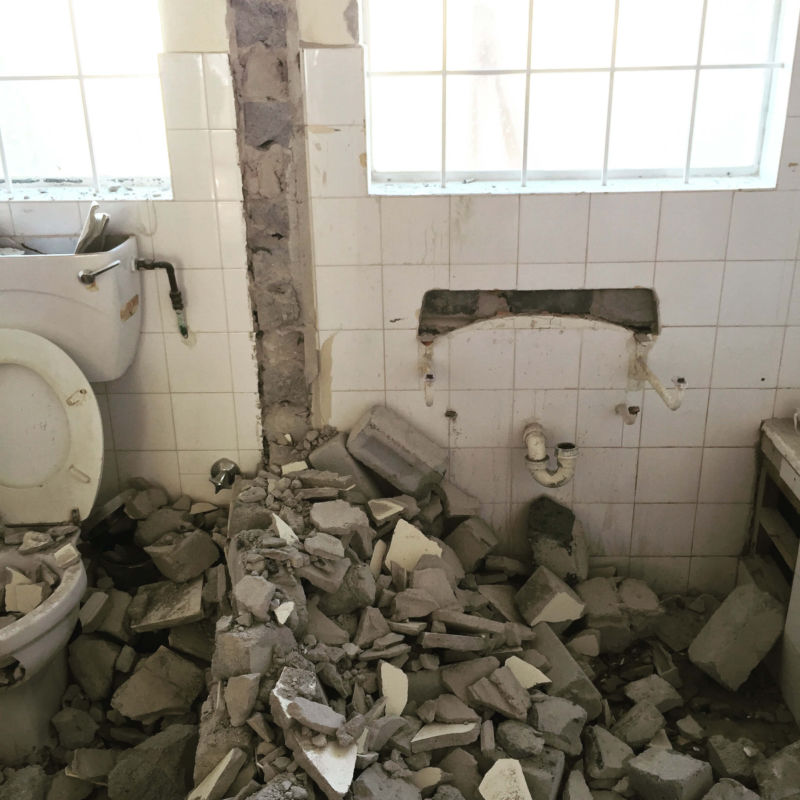 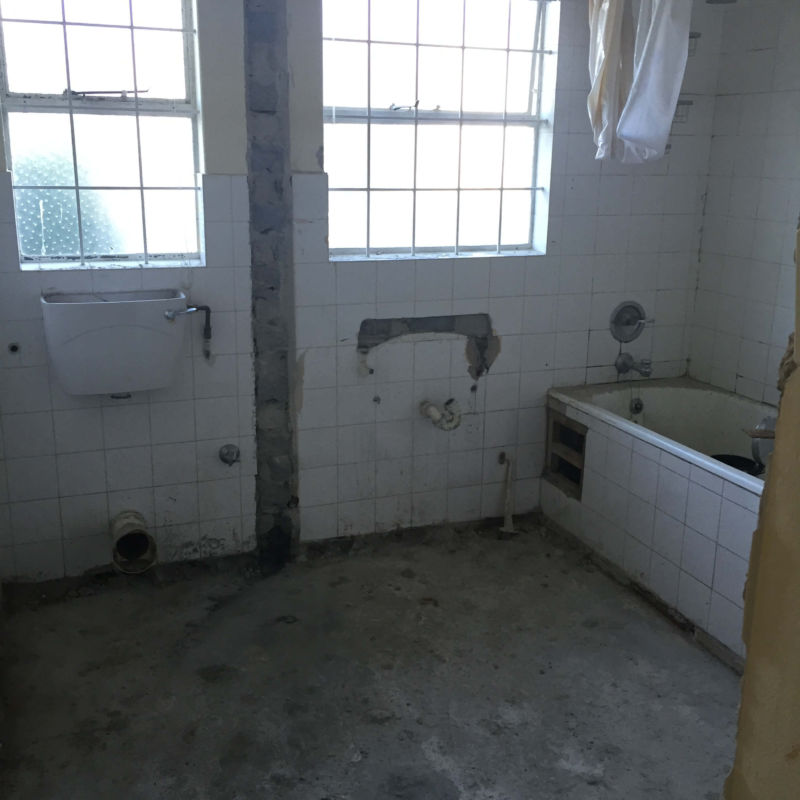 Often bathrooms are overlooked entirely when it comes to design appeal and the builders often just go ahead with the “temporary” layout on the initial plans when often this isn’t always the ideal way to use the space. A toilet can be jutting out and ruining the “flow”, a bath might be squeezed into a cramped corner…

Lisa from Bespoke Bathrooms is all about getting the most out of a small space and creating a bathroom that looks beautiful and works well for the function it needs to fulfill.

She first popped around to my home on a day when demolition was taking place… not an ideal introduction… but what it meant was that she was able to get an idea of the layout of the home and the bathrooms, the light, the flow etc. She also sat down with me to discuss my own aspirations for the space. What ideas did I have in mind for the bathroom of my dreams? Naturally I headed straight to my Pinterest boards to give her an idea of my style.

From there she went away with my plans and ideas and spent some time figuring out what would be the best configuration for each bathroom given my space constrictions.

The main/ kids bathroom layout actually ended up remaining the same as on the original plans, with only a few adjustments to the width of the bath so that the bath and the shower lined up but the result was far, far superior to what we had before… I think you’ll agree? 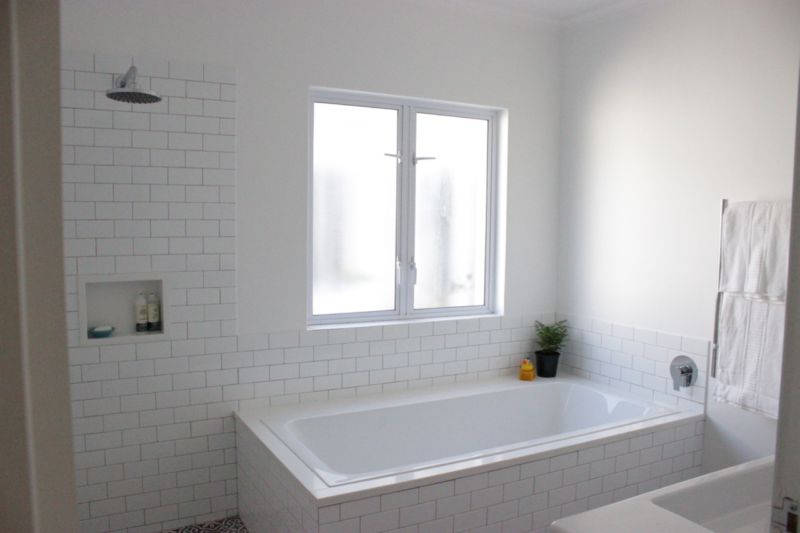 Lisa also pointed me in the direction of some great suppliers for my preferred subway tiles and budget (but beautiful) bathroom fixtures and insisted that a heated towel rail was an essential in the budget! I loved all of her ideas but unfortunately our budget meant that we had to scrap a few such as the hand shower for the bath and the wall lights next to the mirror. We also have had to put our vanities on hold until we have more cash to spare for the storage under the sink that we so desperately need!! 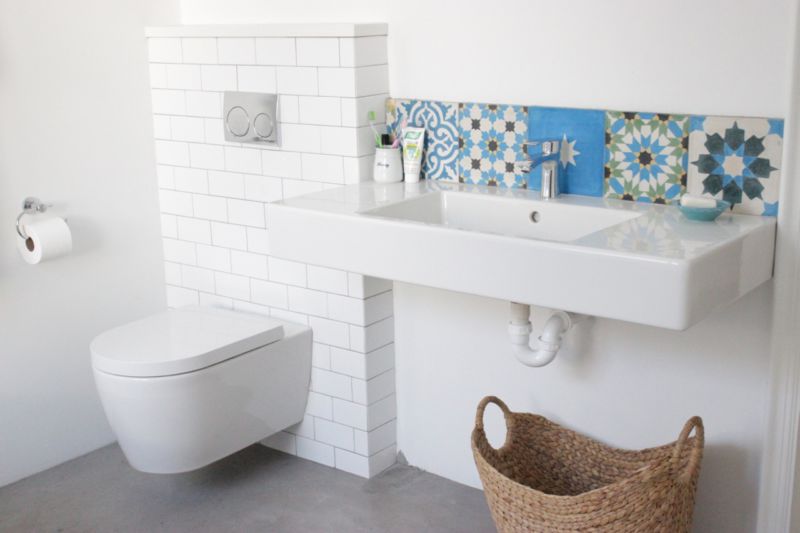 Where Lisa really came in handy was the design and layout of the en-suite bathroom… I had envisaged a haven where I could escape the crowds and indulge in daily “me time” I hankered for pretty pattern floors, subway tiles, a walk-in shower where I didn’t have to climb over the bath or peel the shower curtain off my leg! My secret longing was for a stand-alone bath of hotel dreams….

Initial plans were not this. The layout had to be practical and if I wanted a bath and a shower and a toilet and a double basin…. something had to give!

Most architects just “plonk” each of the bathroom fixtures into the plan of the room and leave it at that but it didn’t quite work. The shower was in the corner and the bath was next to it but off centre from the window. The toilet was taking up a huge amount of space behind the door…

Lisa looked at my Pinterest dream bathroom and realised one of the key elements in all the bathrooms I had pinned (aside from the Moroccan floor tiles) was the stand-alone bath. She set about helping me to make that happen!

She rejigged the layout so that the shower was now behind the door, the double basin was on the left as you walked in next to the toilet, and the new stand-alone bath had pride of place under the central window!!

I was thrilled! This was my ideal layout for my en-suite bathroom/ sanctuary! Then it was time to head out to make final decisions on all the fixtures and fittings. Liza pointed me in the direction of all her bathroom contacts and preferred suppliers and I headed out to do the pricing exercise… Not for the faint hearted. Our budget took a bit of a knock when I realised my expensive taste 😉 But this was a bathroom we would be using for the rest of our lives so I did a bit of arm twisting (and scrimping in other areas) to be able to afford stylish bathroom fittings that would go the distance! 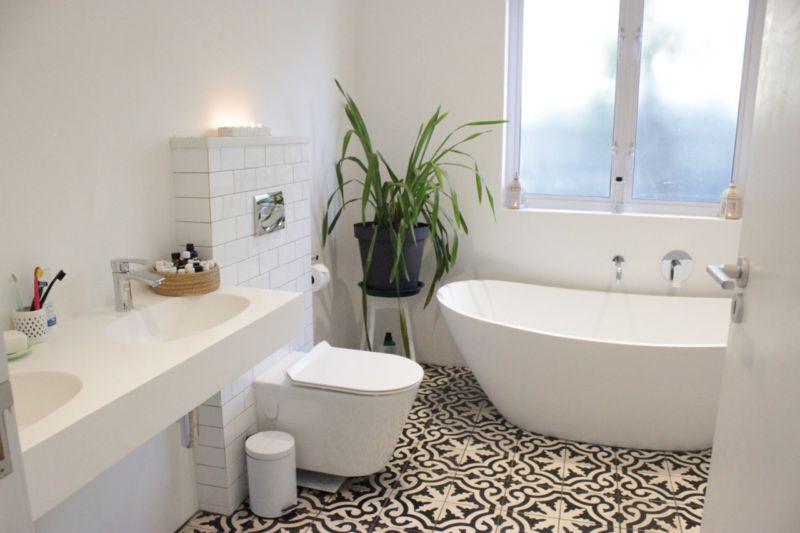 After years of dreaming and months of waiting I’m finally able to enjoy the most stunning space. My very first en-suite bathroom was well worth the wait!

It’s a beautifully laid out and stylish space. One I will enjoy for years to come. Thanks Lisa for helping make this into a reality!

I’m in love and feel like a spoilt princess… or at least someone enjoying a hotel holiday… every time I walk into my en-suite!

If you want to see more pics of my home renovation keep coming back every Thursday as I roll out my Room Reveal series over the next few weeks!

What I... Luisa from BeautySavy