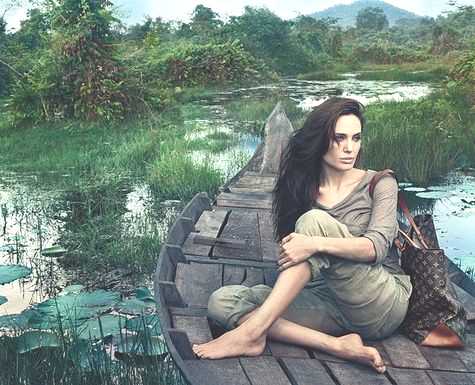 Apparently Jolie was paid in the region of $10 million for her time, but has elected to donate a significant slice of her fee to a charity – most likely the Maddox Jolie-Pitt Foundation, which the couple founded to aid community development and conservation in Cambodia.

The most recent campaign images feature U2 frontman Bono and his wife Ali Hewson in Africa, where the couple have long campaigned for the fight against extreme poverty, and actor Sean Connery photographed on a beach near his home in the Bahamas. Previous ‘faces’ of the campaign include Vuitton favourite Sofia Coppola and her father Francis Ford Coppola sitting in the Buenos Aires countryside, Rolling Stone Keith Richards in a hotel suite with a Louis Vuitton guitar case, and former President of the Soviet Union, and Nobel Peace Prize winner, Mikhail Gorbachev, in the back of a limo passing the remaining part of the Berlin Wall.

The campaign is expected to run for at least 18 months and will also feature a video interview with Jolie filmed on location later in the month.

I’m not usually a big Angelina fan but I am quite partial to this advert – if I had the money I would certainly be buying a Louis Vuitton bag round about now!

Am I Betty Draper?